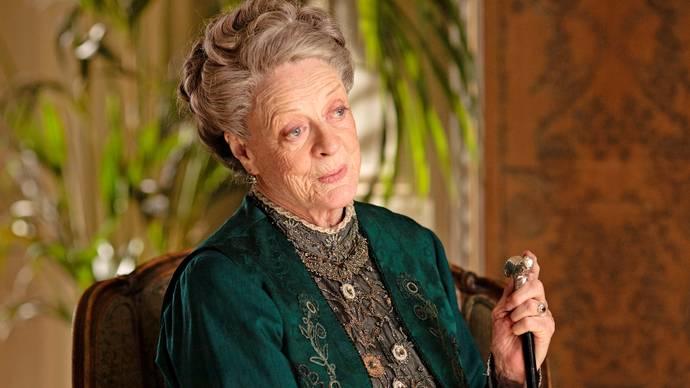 If fans could have their way, “Downton Abbey” would end its final season with the Dowager Countess biting the dust and Lady Edith throwing a big wedding. Those were some of the storylines fans submitted in the comments of my blog post “Downton Abbey”: How Do You Think It Should End?” and in response to the question posted on Google Plus the Downton Abbey Fans community pages.

The Daily Mail has quoted “Downton” creator Julian Fellowes as saying “Maggie Smith will never die!" to put to rest rumors that Lady Violet will meet her end during season six. Fellowes has also said he may include a younger version of the sharp-tongued matriarch in his upcoming NBC series “The Gilded Age”. (More on that to come.)

But some fans seem to think Lady Violet’s demise would be an appropriate dramatic ending to the series which began with a succession of bombshells. They also think weddings, babies and a grown up little George should be part of sending the show off into the sunset. Here is how fans say “Downton Abbey” should end:

The Dowager Must Die

“I think it should end like it started with a major event. The stock market crashes, Mary dates a French royal, Edith gets married, Rose has twins and Lady Violet dies upstairs. That would be entertaining because from the needless sinking of the Titanic until the stock market crash, the world they lived in thrived. After that it was over. A fitting end indeed.”﻿

But killing off the Dowager was considered “heresy” to others. In response to Lariena, David Brown wrote:

“I can’t agree with (the) Dowager dying; she is (the) lifeblood of (the) show, she must live to the end. My heart would be broken and so would all the characters﻿.”

“Downton Abbey” Wedding Bells Or Not

Some fans agreed Lady Edith should star in a “Downton“ wedding.

”I would love to see Edith getting married to someone trustworthy, poor lady had a lot of bad luck in her life…” says @stuti mallik.

One commentator thinks Mr. Gregson may not be dead (as do I ) and a reunion with Edith would be a perfect finale.

“I would love it if Gregson returned and his insane wife ought to die in an accident so he can finally marry Edith and acknowledge Marigold,” a Guest commentator posted. “Either way, I definitely want to see Edith doing more work at the magazine and being a strong businesswoman. I imagine by the end, she'll have moved with Marigold to London permanently to run the magazine.”

Lady Mary getting hitched or not was also a story fans want to see play out.

“Should end with Mary deciding not to get married…” said Jennifer Nanek.

“If she is to remarry, I want Blake to come back into her life; she should be wary of Talbot since he likes fast cars and Matthew died in a car crash,” said Guest.

Fans also want to see Carson and Mrs. Hughes tying the knot in either a “great” wedding or quaint one. Mr. Moseley and Baxter should go from zeroes to heroes by walking down the aisle too.

Babies For Rose And The Bates

Fans were in one accord about Lady Rose and Anna and Mr. Bates having kids.

Lariena Nokes as previously noted would like Lady Rose to have twins. Others feel one child is sufficient. A baby for Anna and Bates would probably be a source of happiness for the berated twosome and fans said giving them a child would hopefully put the “who killed Mr. Green” story to rest.

A Love Interest For Thomas...Finally!

Fans also felt Thomas should finally get a paramour or join the Navy. Those seemed to be the main ways to bring the conniving servant joy.

“I would really like to see Thomas have a love interest. It would be quite quirky in those times where being homosexual was considered to be a condition,” said stuti mallik

Little George All Grown Up

Finally fans would be overjoyed to see a time jump that would show a grown up little George as an Earl.

While David Brown felt that would be too much of a fast forward, Afshee Umair revealed her reasons:

“I just want George to be shown all grown up looking as handsome as his dad﻿.”

Hm, maybe Dan Stevens can make a cameo playing his own child. That would be some ending indeed.

(What do you think of these fan storylines? Add your two cents in the comments below.)