GPB Passport – A Benefit for Supporters of GPB

Stream tens of thousands of hours of the best of public television on demand with this powerful donor benefit.  You’ll enjoy full seasons, catch up on episodes you missed and access special collections, any time, on any screen, with this exclusive streaming service from GPB!

Donate Now to sign up for GPB Passport and start streaming today!

What You Can Watch with GPB Passport

Donate Now to sign up for GPB Passport and start streaming today!

Watch Anytime, On Any Screen

You can watch GPB Passport programs on your television through your Roku, Apple TV, Fire TV, Samsung Smart TV, Android TV and more.  You can also stream shows on your computer, tablet, smartphone and other streaming devices. 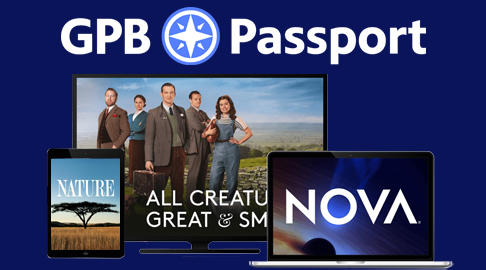 Enjoy great donor benefits including GPB Passport with your Sustaining donation of at least $5/month or a minimum one-time gift of $60.

Use one of the services below to sign in to PBS: