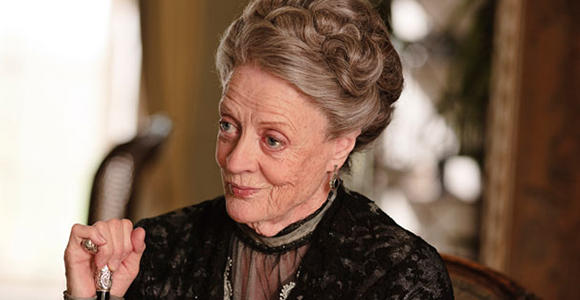 I wonder if Dame Maggie Smith has recovered from that kiss yet.

Apparently George Clooney kissed "Downton Abbey’s" Dowager when he appeared on the set to shoot a skit for a charity. Swoon!

Tom Cullen, who plays Lady Mary’s dashing suitor Lord Gillingham, gave up the details during an appearance on the British talk show Lorraine.

Vanity Fair reports Tom Cullen says Clooney offered to greet the 79 year old Dame Maggie Smith in a way befitting a legend. He gave her a respectful smooch. And she did what most of us gals would have done. “She collapsed onto the sofa,” remarked Cullen.

Cullen was not there for the shoot, but he managed to secure enough information to share with rabid fans.

Last week several media outlets reported that Clooney would appear on a Downton themed special that will air during the British telethon TextSanta around the holidays.

Some reports mentioned that Clooney would play an American at a wedding and interact with Lady Mary and the Earl of Grantham.

The cameo is probably a favor to Hugh Bonneville as he and Clooney became close friends after they filmed “The Monuments Men” together. But Clooney is apparently also a "Downton Abbey" fan.

The skit isn’t scheduled to air in the states as it’s not part of the regular series.

We’ll have to formulate our own opinions on January 4, 2015 when the show premieres in the U.S.