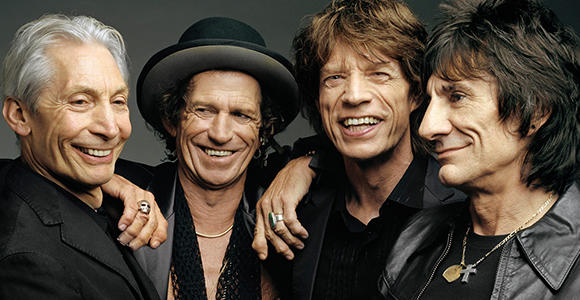 The Rolling Stones get a lot of satisfaction from watching Downton Abbey. The UK’s Sun reports that the Stones end their rehearsals early Sunday nights just to watch the show. Rumor has it they wouldn’t mind guest roles. Hugh Bonneville who is pals with guitarist Ronnie Wood is trying to coax the producers into give the Stones cameos.

An unnamed show source envisions that Mick and the gang could play “a rag-tag bunch of traveling entertainers or even a circus act”. But the producers have not confirmed this nor commented on the rumors at all. This casting talk has inspired me to dream about what other artists should guest star on Downton Abbey. Here are a few I’d like to see.

Diddy would run afoul of the Earl of Grantham by throwing his infamous white parties. Meanwhile without Matthew Crawley’s guidance, Downton falls into financial disarray again. Beyonce comes to the rescue by teaming up with opera star Kiri Te Kanawa, another new Downton guest, to put on a Save Downton benefit concert. The two create a new genre of music: R&B/opera.

2.) Sinead O’Connor - Just when we thought Branson had abandoned his Irish liberation causes, enter one of his radical friends from the old neighborhood, played by Sinead O’Connor, to stir up trouble. Sinead turns out to be more than Branson’s old chum. She is his older woman first love. She entangles him in a plot to hold the estate hostage. But then abandons the idea to take part in the benefit concert in order to revive her dead music career.

3.) Justin Bieber - A young American with great hair and a monkey arrives in town and sweeps Rose off her feet. He also gets on Carson’s nerves by driving his car in the neighborhood too fast and getting into shouting matches with the servant staff. He tries to get into the Crawley’s graces by taking them shopping at Selfridge’s department store where reveals that he is Mr. Selfridge’s love child. This paves the way for a two part Mr. Selfridge/ Downton Abbey crossover episode.

It's fun to play casting director and come up with artists to guest star on Downton. Why don't you try it? Which other artists should make an appearance on Downton and what would the storyline be?