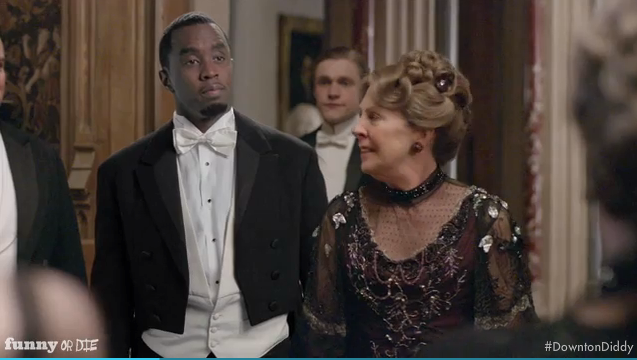 Let’s set the record straight, shall we? Hip Hop Mogul Sean “Diddy” Combs is not joining the cast of Downton Abbey as the first black character. PBS was quick to shoot down that Twitter rumor yesterday after the hip hop mogul set the social network on fire by announcing he was becoming a series regular.Followers and fellow actors like Jackee Harry jumped on the news and swiftly congratulated him in kind. It turns out that the tweet was part of Diddy’s promotion of the Funny or Die spoof Downton Diddy which debuted at 12 midnight on the online network.

MY BIG NEWS: So happy to announce that Im a series regular on DOWNTON ABBEY-my favorite show+i'll be debuting a sneak peek tonight 12am PST!

In it, Diddy plays the original first black character on the show, Lord Tom Wilcott. Wilcott arrives at Downton, meets the aristocrats and servants and declares that he is the real owner of the manor. Then he interjects himself in a series of scenes from seasons one through three.

At one point, he denounces Thomas for touching his face saying “Good God, have you lost yourself man! I can’t love you not when I love Sybil and Mary and Ms. Patmore. And the Dowager Countess and a couple of the maids.”

But then he changes his mind after asking Thomas to touch his face again. "Ok, I have room for you," he concedes.

The close to five minute clip is a riot! You can watch it here but be warned that it contains some racy language.

To be clear, Gary Carr, the British actor and star of the ITV show Death in Paradise is playing the first black character on Downton. He was cast as Jack Ross, the jazz singer.