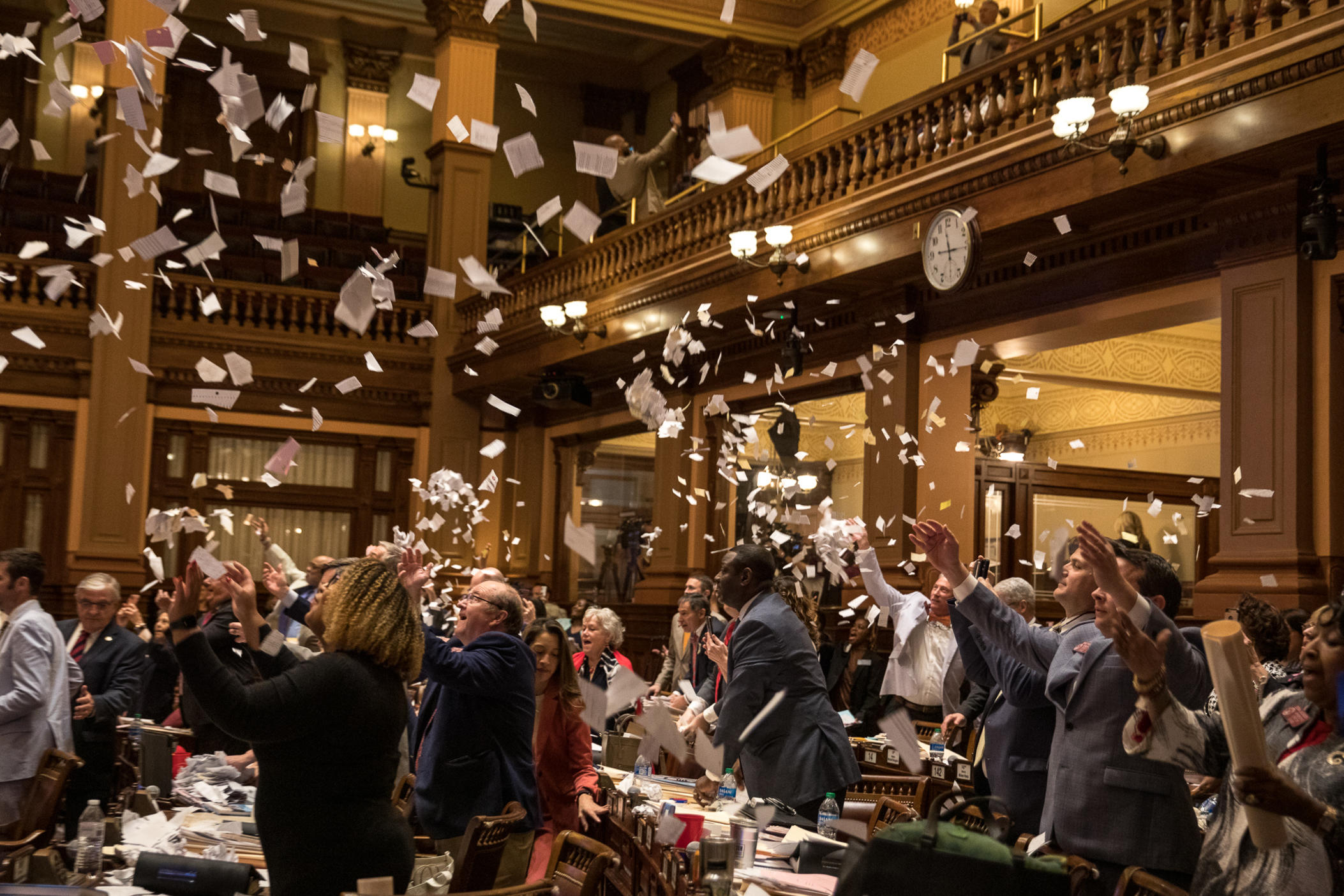 Caption
House lawmakers toss paper into the air on April 4, the last day of the 2022 legislative session, a tradition when the chamber adjourns Sine Die.
Credit: Riley Bunch / GPB News

The 2022 legislative session was destined to be one filled with controversy and base-pleasing stunts heading into a crucial primary election year for all 236 lawmakers — and the governor.

“I also look forward to working with the House and the Senate to pass and sign a parental bill of rights in our education system and other pieces of legislation that I strongly support, to ensure fairness in school sports and address obscene materials online and in our school libraries," he said.

Facing a challenge from Trump-backed former Sen. David Perdue, Kemp successfully checked off a wishlist that burnishes his conservative credentials — and gives Democrats plenty of bills to mobilize their own voters in opposition.

On this week's episode, GPB’s public policy reporter Riley Bunch joins me to break down what passed and what’s been passed over now that the legislature is done. 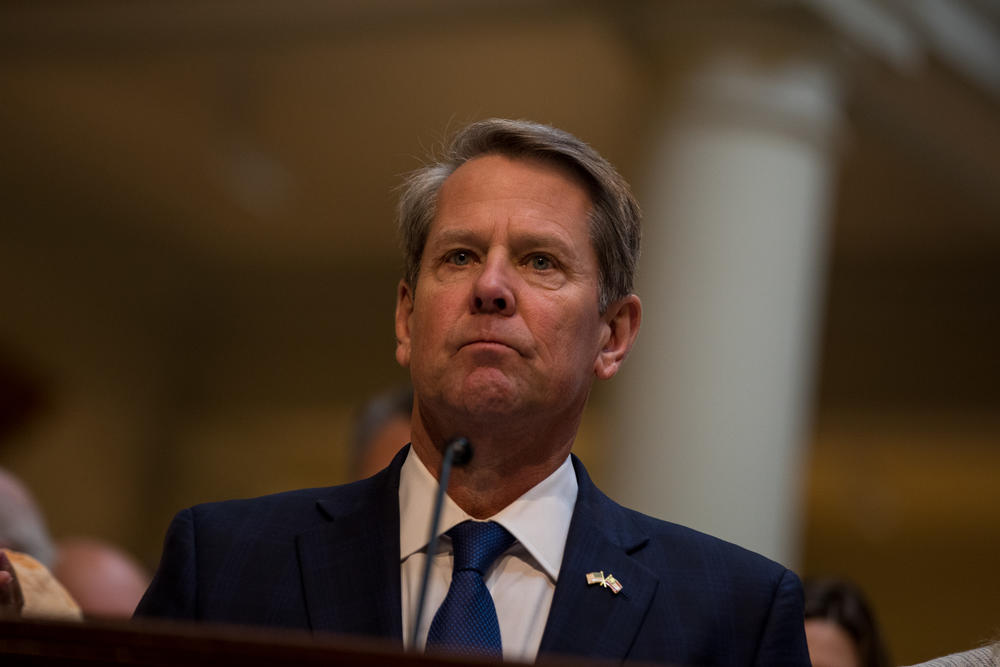 The clock struck a little after midnight on Sine Die, the final day of Georgia’s 40-working-day legislative session and, frankly, people were a little stunned.

In the final minutes, first the House, then the Senate approved a bill that would ban so-called "divisive concepts" surrounding race from being taught in Georgia schools, with one amendment many lawmakers had never laid eyes on.

"We should be clear about what we're voting on in this bill, that the bill sponsor failed to mention that this bill now adds the transgender sports ban," Rep. Matthew Wilson (D-Brookhaven) said during a vote.

Hours before, Kemp stepped up to the podium in the House and Senate chambers, listed some of his achievements, then he went on to say he wasn’t finished and had a few more things to cross off his wishlist before they all headed home.

"As I always say we must never rest on our laurels," he said. "And we've got a little bit of work left to do this evening. Specifically, as the evening progresses, I'm looking forward to continuing to critically important conversation on the best ways to achieve an income tax cut for hardworking Georgians, fairness in school sports, divisive concepts, and I know you've got to pass that historic '23 FY budget."

The budget is the only thing by law the General Assembly has to pass, and they did — including pay raises for teachers and state employees. In addition to a $1 billion tax refund because of surpluses, lawmakers also voted to overhaul the state’s tax rate to a flat 4.99% by the end of the decade that also increases exemptions to help lower-income taxpayers.

If Kemp signs the divisive concepts bill, which he seems likely to do, the law would ban the teaching of nine specific concepts, including  “one race is inherently superior to another race” and “The United States is fundamentally racist.”

"Critical race theory" is not taught in any Georgia K-12 schools and is not in any curriculum. But the bill creates a vague list of concepts that teachers have to stay away from — that teachers say makes them question what they can and can’t discuss in their classrooms.

The other last-minute amendment also paves the way for high school athletic associations to have an oversight committee that could decide if and how transgender girls can compete in sports.

In a way, it passes the buck to these associations to handle policies for transgender athletes instead of legislating them. By doing so, GOP lawmakers who pushed for this legislation can say they acted but in the end, aren’t involved.

It’s also important to note that there isn’t any evidence that transgender girls are competing in girl’s high school sports in Georgia.

Democrats in the legislature were unhappy, to say the least. In fact, once it quickly moved to the state Senate, lawmakers hadn’t even seen the amendment and tried to get it printed out.

But hours earlier, a stricter bill explicitly disallowing transgender boys and girls from playing in sports teams matching their gender identity passed the Senate and failed to come up in the House. So the language that did pass is a watered-down attempt at pleasing the conservative base.

There was also a relatively watered-down election bill that passed, after we saw several proposals jammed into a 40-page omnibus.

The only change in election law that's headed to the governor’s desk would allow the Georgia Bureau of Investigation to directly investigate claims of election law violation. Previously, they would have to be invited by the Secretary of State or Attorney General’s office to investigate.

Practically speaking, they’ll likely forward any requests/complaints to the State Election Board, which already handles complaints and has sworn law enforcement officers dedicated to investigating such violations.

And because Georgia has a checkered history with voter intimidation and voting rights, many people argued extra enforcement by the GBI was unnecessary and potentially harmful.

How a 40-page voting bill was whittled down to two pages, then all but disappeared, is likely thanks to local elections officials — mostly Republicans and those representing Republican areas — who testified about how many of the proposed changes were redundant, unnecessary and would make it harder to do their jobs.

So, in the final hours, instead of stripping out those things and keeping other more positive changes, such as flexibility with the number of voting machines on Election Day and easing election night reporting requirements, they decided to do the opposite of 2021’s 98-page bill and just make one solid change.

The session wasn’t all partisan bickering. There were some things to smile about, like lawmakers having the opportunity to pose for photos with both the Major League Baseball World Series and College Football National Championship trophies.

And there was a 76-page bill that unanimously passed with bipartisan support: the Mental Health Parity Act.

Hailed as the most significant legislation passed this session, House Bill 1013 is a substantial mental health reform package that aims to create parity across treatment and insurance coverage, and backs up the federal law requiring insurance companies to cover mental health in the same way they cover other medical care.

The Mental Health Parity Act was championed by Ralston, who has called mental health treatment in Georgia inadequate. In fact, Georgia often ranks near the bottom in coverage. The final bill not only requires insurance providers to cover mental health coverage on par with physical conditions; it also aims to increase the number of mental health professionals across the state.

“Because of the dedication of so many, countless Georgians now have reason to believe the future is bright with the promise of hope," Ralston said at the bill signing. "This journey was made possible by the belief of so many with different life experiences and perspectives, but were united on one core principle: failure was not an option."

Kemp signed the bill flanked by Democrats, Republicans and advocates during a massive ceremony on the final day of the session.

“This ultimate outcome was exactly what we had hoped in the years since elected officials, advocates, industry experts and caring mothers and fathers have met, and they worked hard on what ultimately became this piece of legislation,” he said.

Along with HB 1013, legislators unanimously passed Senate Bill 403, which creates a statewide framework for mental health professionals to act as co-responders with law enforcement officers on crisis calls.

"Today we reaffirm those families and individuals that they matter, that they are cared for, and that their fellow Georgians will not turn a blind eye to their struggles any longer," Kemp said. "And today we take a monumental step toward a Georgia where every person receives the help they need to fight and overcome whatever personal trials that they may face.”

Several high-profile items did not pass the session.

To the dismay of advocates, lawmakers could not reach an agreement on the state’s medical marijuana licensing issues. A constitutional amendment on sports betting didn’t gain traction, and neither did a controversial measure that would ban the mailing of abortion-inducing drugs without seeing an in-person medical provider.

This week, Kemp signed SB 319, which allows individuals who are already legally able to have a firearm to carry their weapon in public without first going through the licensing process.

Supporters say it does away with extra paperwork for lawful gun owners. But critics say it could allow people to slip through the cracks when gun violence is at a high level.

A GPB News analysis of weapons carry permit data from recent years and found almost every Georgia county had at least a 90% approval rating for applications.

This year was the final curtain call for many lawmakers, including Lt. Gov. Geoff Duncan, who continued to urge lawmakers to put “policy over politics.” He described how his family endured the unrelenting attacks against him by the former president and his supporters. 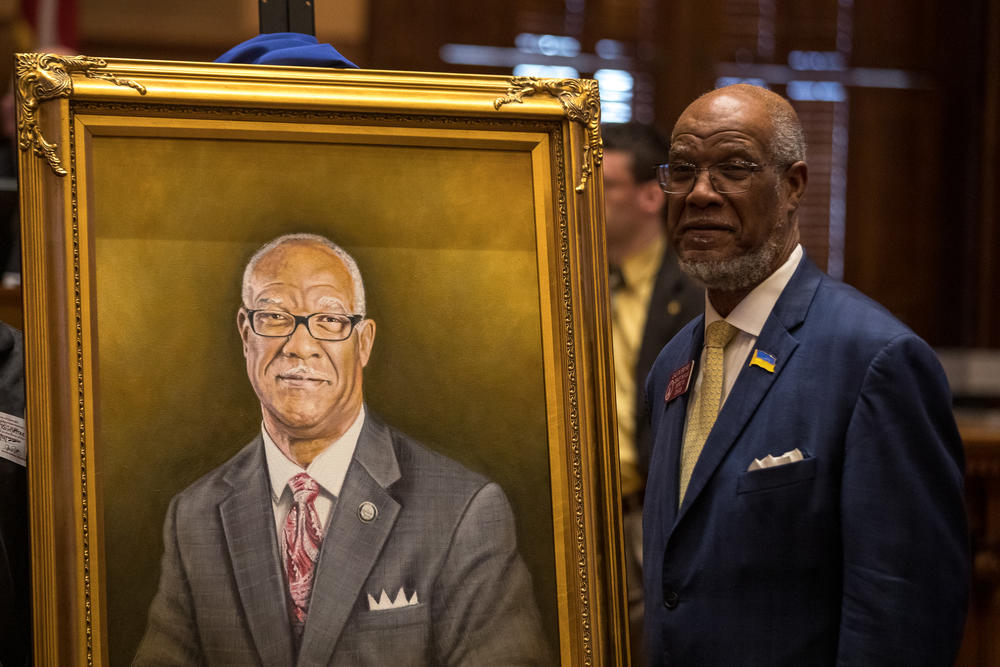 Dean of the House Columbus Rep. Calvin Smyre stands next to a portrait of himself that will hang in the Capitol. The 74-year-old lawmaker is retiring after 48 years in the General Assembly.

The Dean of the House, Columbus Rep. Calvin Smyre, had an emotional send-off after 48 years in the legislature, complete with a portrait that will hang in the Capitol.

He’s leaving to become the U.S. Ambassador to the Dominican Republic.

“For the past 48 years, I have worn this name badge as a badge of honor," he said. "Over the years, I've had many many leadership positions and titles, but being called Dean of this House, while it is the least of power, it is the one I admire the most.”

It’s been an eventful legislative session that will have an impact beyond these 40 working legislative days: an unprecedented budget with pay raises and tax savings, further oversight and restrictions on education and discussion of race in the classroom and more will influence the lives of 10 million Georgians — and a handful of politicians facing primary challenges this May.

Battleground: Ballot Box from Georgia Public Broadcasting is produced by Stephen Fowler. Our editor is Josephine Bennett, our engineers are Jake Cook and Jesse Nighswonger, who also wrote our theme music. You can subscribe to the show on Apple Podcasts or anywhere you get podcasts. 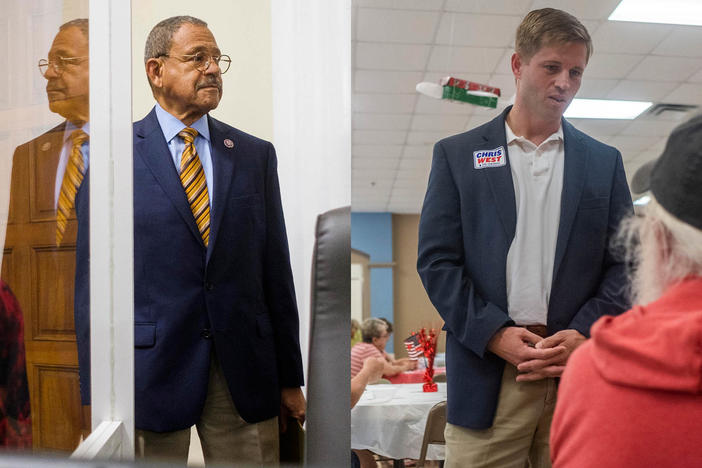 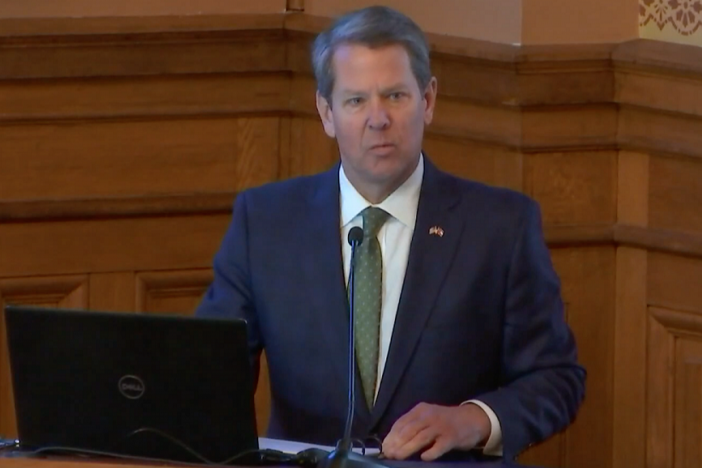