The Georgia State Elections Board has selected a bipartisan panel to review Fulton County's elections board. GPB's Stephen Fowler reports.

Workers sort ballots in Fulton County in summer 2020. The State Election Board has appointed a bipartisan three-member panel for a performance review of Fulton's elections board, the latest step in a lengthy process allowed under new state elections law.

Gwinnett County Elections Board member Stephen Day, Catoosa County Elections Board chairman Ricky Kittle and Secretary of State general counsel Ryan Germany will begin a review of Georgia's most populous county after a number of Republican lawmakers initiated complaints about the 2020 election cycle in late July.

RELATED: How Does Georgia's Election Board Takeover Law Work? Not Quickly

Presumably, this review board would also look into the numerous allegations made about Fulton County's elections, from unfounded claims of fraud to more concrete examples of problems with the voting process that did not affect the outcome of the election.

From there, a report will be issued to the Secretary of State's office, the State Election Board and the Fulton County Commission with its findings, which will include "evaluations, judgments and recommendations as it deems appropriate."

After the report is finished, the panel ultimately could recommend Fulton's bipartisan elections board be suspended and replaced by a temporary superintendent with the authority to make many elections decisions, including staffing and polling place choices — but that outcome is unlikely.

Contrary to some Republican lawmakers' public statements, this panel is not intended to examine the work of Rick Barron, Fulton County's hired elections supervisor (who was fired by the board earlier this year before the decision was reversed by the Fulton County Commission) but focuses on the "superintendent," which by law is Fulton's bipartisan five-member elections board.

Members of the SEB stressed that the selection of the panel was required under the 98-page SB 202 signed into law earlier this year, and must include two competent local elections officials and one member of the Secretary of State's office.

New Democratic board member Sara Tindall Ghazal said her hope and expectation was that the panel takes its job seriously and will focus on how Fulton's elections board can best serve the voters moving forward.

"The narrative driving this pressure has been influenced by disinformation surrounding the November 2020 election, but the fact remains that Fulton County voters have reported numerous problems for far longer than November 2020, particularly surrounding registration and absentee ballots," she said. "So I urge Fulton County to view this performance review board as an opportunity to have fresh eyes on their systems and their procedures and identify areas of improvement."

"This is an invitation to Fulton, that it would be very nice for the board to be able to report — when the report comes out — that this was a problem, but in the meantime we we've seen this be cured, and this be fixed," he said. "So I encourage folks to keep trying to improve and not just throw up their hands and say 'Well it's all in the hands of the board, now!'"

“I have been saying for a long time that the state needs the authority to step in when counties have consistently failed their voters," Republican Secretary of State Brad Raffensperger said. "I’m pleased that the state finally has that authority and that the State Election Board has taken the first step today. I’m confident that the performance review team will do a good job, and I hope Fulton will cooperate with this process.”

Democrats and voting rights groups have blasted the takeover process as an attempt to disenfranchise certain voters after Republicans lost the state in the 2020 elections and 2021 U.S. Senate runoffs.

"Fulton County is home to the most voters of color of any county in the state," voting rights group Fair Fight Action said in a statement Wednesday. "The State Election Board appointed a review board for Fulton County that is all white."

It's been a roller coaster of an 18-month period for Fulton's elections operations, from the understaffed, overcrowded and chaotic June 2020 primary to a smoother November election that was besieged by attacks and failed lawsuits from former President Donald Trump and others who wrongly claim the 2020 election was fraudulent, further compounded by an avalanche of absentee ballots and numerous process errors that did not affect the outcome.

But Fulton has made numerous changes that will likely be reflected in the panel's investigations and report, from adding more polling locations to creating a new absentee ballot staffing structure to making personnel changes both within the election office and on its board.

Two of the five members on Fulton's elections board are new since the 2020 election cycle — chair Alex Wan and Democratic member Teresa Crawford. Ralph Jones, Fulton's voter registrations chief repeatedly named in an election monitor's report as a contributing factor to sloppy process issues, has resigned.

The State Election Board also voted to post several rule changes for public comment, including tweaks to election procedures to comply with Georgia's sweeping new voting law. This ranges from Logic and Accuracy testing of equipment to applying for absentee ballots to counting results after polls close.

Those changes will be posted online and further action will be taken at the next meeting. 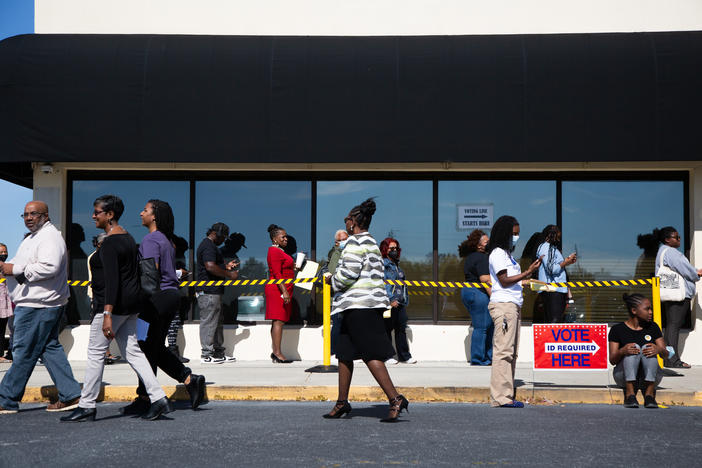