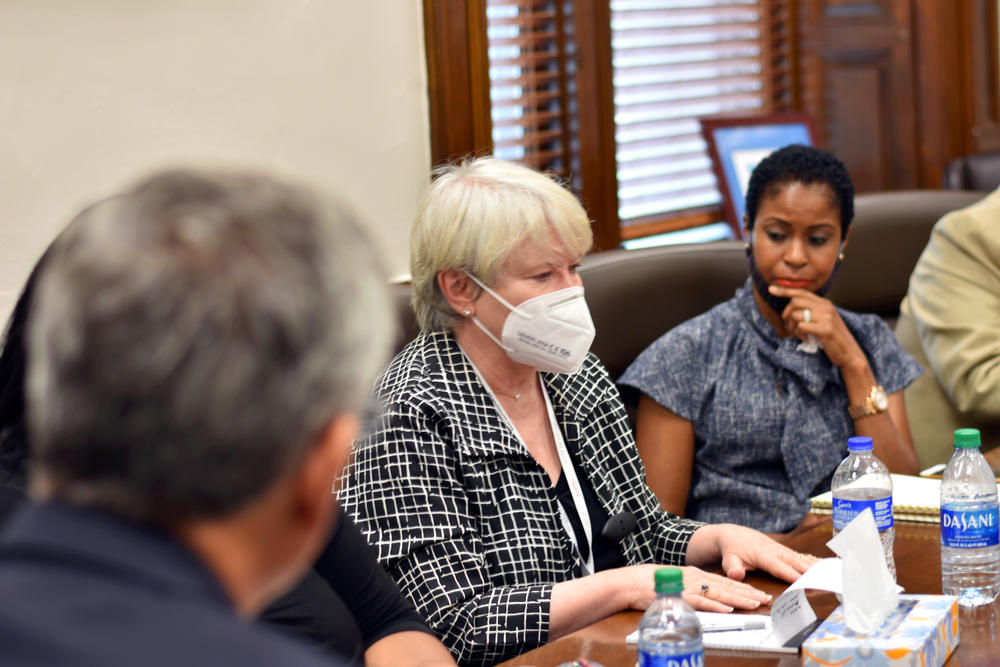 Fulton County Elections Board Chair Mary Carole Cooney speaks at a meeting with the secretary of state Monday, June 22, 2020.

While politicians and the public are still seeking answers about what went wrong with Georgia’s June 9 primary, officials from the state’s most populous county are looking to ensure the same issues don’t plague the August runoff and November general election.

In a private meeting Monday, members of the Fulton County Board of Elections, the Secretary of State’s office and several civil rights groups including the Rainbow PUSH Coalition discussed concerns with the mail-in absentee voting process, polling place shortages and struggles with poll worker training that led to problems with a new $104-million voting system.

“The most important thing is, we really just want to deal with the issues that we’ve been seeing for a long, long time,” Republican Secretary of State Brad Raffensperger said to the board members. “Because even though we don’t run elections, at the end of the day we’re in the hot seat – and I’m sure you’re in the hot seat.”

On Election Day, voters in parts of metro Atlanta – especially in predominantly Black communities – waited in lines upwards of four hours as county officials grappled with fewer machines in polling places, fewer places to vote and fewer knowledgeable poll workers because of the coronavirus pandemic.

Fulton County accounted for about 70% of reported issues statewide, the Secretary of State’s Office said.

Raffensperger announced a four-point plan last week aimed at reducing lines, increasing training and technical support and pushing more people to cast their ballots ahead of Election Day. At that news conference, he also asked the legislature to pass a measure that would allow the State Election Board to take over county-run elections.

But in the conversation with Fulton elections board members, the tone was more conciliatory as state staff outlined data around pressure points that would be addressed before the next election.

“I want to give everyone a hall pass,” Raffensperger said. “With COVID-19, we understand that you couldn’t do some training we had done with poll workers, and we understand more hands-on training is important.”

The average age of a poll worker in Georgia is 72, and many across the state dropped out because of health concerns with the pandemic.

Fulton County elections board member Aaron Johnson said there are already conversations to recruit younger, more tech-savvy people to help work the polls. For example, he heard from a technology company in Atlanta that wants to offer dozens of staff members during the election, as well as several restaurants that will reach out to younger residents.

The Secretary of State’s Office has a form on its website to express interest in serving as a poll worker, or people interested in helping can contact their local county elections board.

While much of Monday's discussion focused on Fulton’s election woes, Johnson said problems were not limited to one county and it was more important for the state to start discussing solutions for everyone involved.

“The contention is to continuously try to pile onto Fulton County,” he said. “I think you can talk about what the problems are without saying ‘It’s your fault,’ and our problems are not unique.”

Board member Mark Wingate said the dramatic increase in mail-in ballots plus COVID-19 created a much more labor-intensive process for the elections staff, and given the size of the county created more issues as well.

CONTEXT: Read Extensive Reporting From GPB News On COVID-19 And The Polls

“I’m not making excuses but, my lord, this was just an anomaly on everybody,” he said. “And when you’re Fulton, that anomaly is much bigger than it is in Chatham County, as an example."

One of the largest complaints pre-Election Day almost exclusively directed towards Fulton County was a large number of emailed absentee ballot applications that were processed months later and, in some cases, not at all.

“We did not keep up with emailed ballot [applications] and we understand why,” board chair Mary Carole Cooney said. “But we are going to handle them differently so that we can handle that more efficiently.”

The Secretary of State’s Office is working to create an online portal, similar to the current online voter registration system, where voters can apply to vote absentee by mail and track the status of their ballot, while also giving counties an easier way to process the applications.

State election officials will not mail out an application or a ballot to all voters, and even with the new portal voters can still submit absentee applications by mail or email.

More than half a million Georgians who are senior citizens, have a disability or are members of the military are on a permanent list to get an absentee ballot for the runoff election and November general election.

Civil rights attorney and former U.S. Senate candidate Maya Dillard Smith implored both the state and the county to think outside the box for solutions to make voting easier, like bringing voting machines outdoors to accommodate both social distancing and a larger number of voters at once.

“If we’re only thinking about the traditional ways in which this has historically been done, we’re going to lose – we’re in a post-COVID world that is not normal,” she said. “If the only things we’re contemplating are the ways in which it’s been done historically, that’s highly problematic."

Robert Patillo, executive director of the Rainbow PUSH Coalition, said a better solution was to send all Georgia voters an absentee ballot and expressed skepticism that officials could improve things in time.

Patillo likened the challenges to the end of the of the Greek epic ‘The Odyssey,’ where the hero had to shoot an arrow through 12 axe handles to prove his identity.

“He pulled it off, right?” one state staffer asked.

“Yes, because he was Odysseus,” Patillo responded.

Johnson with the Fulton County elections board said many proposed changes that could minimize voting issues, like mailing every voter an absentee ballot, would require changes to state code.

“In my opinion, there are so many simple things that could happen in elections that would be perfect, but they’re all against the law,” he said. “I think it’s just the law hasn’t caught up to the times yet.”

As the final days of the 2020 legislative session wind down, there are several bills pending that could change preparations for future elections. That includes Senate Bill 463, which would require counties to add more equipment, poll workers or places to vote if long lines continue to plague large polling places.

This fall, millions of Georgians will make their choices for president, U.S. House and Senate and their state lawmakers – and millions more will stay...