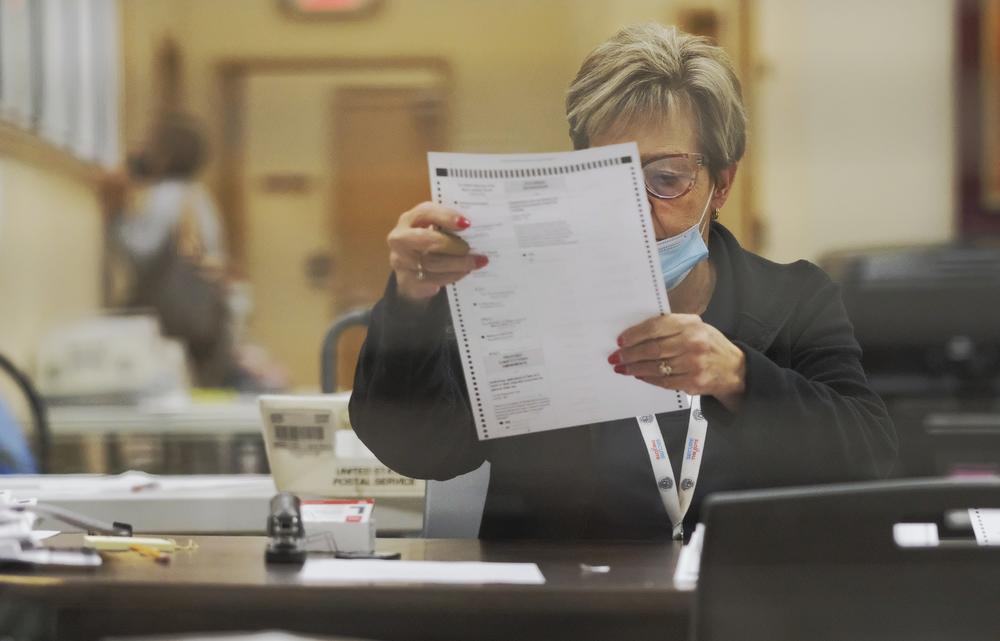 Poll Worker in Bibb Co. looks over an absentee ballot

After a failed attempt by some Republicans to overturn Georgia's thrice-counted certified election results that gave President Joe Biden a victory, GOP lawmakers in the state Senate have filed a barrage of bills that would add more barriers to the ballot box for many voters.

If all of the proposals announced by Senate Republican leadership Monday became law, future elections would look dramatically different.

Only a small subset of Georgians would be eligible to vote absentee by mail, and those that do qualify would have to submit some sort of photo ID with their application either online or on paper. They would not be allowed to get an application from outside groups, and could only return ballots through the mail or deliver in person to the county elections office. If someone moves to Georgia, or moves within the state, they would have to remember to opt in to having the Department of Driver Services update their voter registration, and if they relocate to Georgia after a November general election they could not participate in the runoff.

The 2020 election cycle overwhelmed county elections officials with record turnout, an avalanche of absentee ballots and rampant misinformation and distrust of the election system pushed by many Republicans, and in the weeks following the November election both House and Senate lawmakers met to investigate alleged problems and vowed to change the rules after Democrats flipped the state.

On Monday, eight bills with varying degrees of support and controversy were filed.

One bill with 26 cosponsors, SB 67, would require Georgians that are not military or overseas voters to include either their driver's license or state ID number on the absentee application or include a photocopy of an acceptable voter ID you would need to show to vote in person. Currently, the state's new online absentee application portal requires a driver's license or state ID number, and this bill would authorize that portal to exist beyond the State Election Board's emergency rule.

SB 68 would ban the use of secure 24/7 monitored drop boxes as a method of returning absentee ballots. State elections officials implemented the additional return option amidst the coronavirus pandemic that forced many counties to operate fewer polling places with fewer workers and fewer machines. Of the 12 cosponsors, Sens. Mullis, Gooch, Harper, Thompson, Matt Brass and Brandon Beach each spent the past few months making baseless claims of voter fraud with Georgia's elections.

SB 70 would prohibit voters who participated in a November statewide general election outside of Georgia from being eligible to vote in any Georgia runoff for U.S. House or Senate, after the Jan. 5 dual Senate runoff stoked internet fears and rumors among both parties that out-of-state voters would flood Georgia and influence the outcome. A Republican Florida attorney is under investigation for allegedly attempting to illegally register to vote in the Senate runoff. Raffensperger's office reminded voters that by law "it is a felony to register to vote in Georgia if you are not a resident of Georgia with no intention of leaving and is punishable by up to 10 years in jail and a $100,000 fine." The 11 cosponsors include Mullis, Gooch, McNeill, Beach, Harper and Thompson.

SB 71 would eliminate no-excuse absentee by mail voting, instead limiting it to those who are disabled, "required to be absent" from their precinct, work in elections, have a religious reason or are 75 or older. Anyone would still be able to take advantage of the three-week in-person early voting period. Many Republicans, from President Trump down to state lawmakers, claimed without evidence that there was widespread fraud in the mail-in ballot portion of the state's 2020 election. A record 1.3 million Georgians voted by mail ahead of the November contest because of the pandemic and tightly contested races. No-excuse absentee voting was created by Republicans, and almost exclusively used by Republican voters until the 2018 election cycle that saw Democrat Stacey Abrams narrowly lose to Gov. Brian Kemp. More than 450,000 absentee-by-mail votes in the November election were for Donald Trump. Six of the bill's nine cosponsors are Mullis, McNeill, Beach, Brass, Harper and Thompson.

SB 72 would require county elections officials to receive monthly updates about residents who have died and determine if they need to be removed from the voter rolls. Several social media rumors and viral posts allege dead people cast their ballots, and in large enough numbers to change the results. Specific examples were debunked in the days after the election, from a woman who was very much alive to people with similar names being mistaken for deceased people. State law already requires the Secretary of State's office to receive monthly updates of deaths and remove deceased voters, but this would push those requirements down to the county level. Georgia is also a member of the Electronic Registration Information Center, or ERIC, that enables states to share data on voter registrations to track people who have moved out of state, died or otherwise have duplicate registrations. Of the 11 cosponsors, Mullis, Gooch, McNeill, Beach, Harper and Thompson earlier put their names on a suit that falsely claimed more than 2,400 unregistered voters cast ballots in the November election.

SB 73 would only allow the Secretary of State's office, county elections officials, candidates or candidate campaign committees to send out paper absentee ballot applications to voters, prohibiting third-party and nonprofit groups from sending mailers. Republican lawmakers in the House last year briefly flirted with prohibiting "unsolicited absentee applications" from any source after Secretary of State Raffensperger sent applications to 6.9 million active voters ahead of last year's mid-pandemic primary. Currently, both Democratic and Republican-aligned groups can and do send out absentee applications to voters, so long as the form contains the same information as the state's official form. Some voters and lawmakers conflated applications with actual ballots, leading to claims of unsolicited absentee ballots and mistaken allegations of fraud. Of the 13 cosponsors, Mullis, Gooch, McNeill, Beach, Brass, Harper and Thompson were among a group that made evidence-free claims that fraud permeated the state's absentee voting process.

SB 74 would expand access for partisan poll watchers to view the vote counting process, allowing elections officials to restrict what poll watchers can see or do but directing them to be "as minimal as possible." Republicans complained about access to tabulation in the November election, with the most notable grievance arguing that Fulton County illegally counted votes at State Farm Arena because GOP watchers were "sent home" and votes kept being counted. However, state and county officials said no poll watchers were instructed to leave, no ballots were counted in secret and nothing illegal was done in that process. In several other cases, the state Republican party complained about rules limiting the number of designated observers during the risk-limiting audit process and machine recount of the presidential race. Mullis, Gooch, McNeill, Beach, Brass, Harper and Thompson are among the 13 cosponsors.

Another bill, SB 29, is a more extreme version of SB 67 and would require photocopies of voter ID submitted with both the application and with the actual absentee ballot. That measure was filed by freshman Republican Sen. Jason Anavitarte of Dallas and has no other cosponsors.

Many of these proposals, if passed through the legislature and signed into law, would likely be challenged in the courts, and Democrats and voting rights groups have quickly objected to the bills.

"This unhinged set of voter suppression bills from a radical Senate Republican leadership appears intended to appease conspiracy theorists like those who stormed the Capitol last month,” voting rights group Fair Fight spokesman Seth Bringman said. “The bills are unnecessary by Republicans' own assessments of the 2020 election, and designed to limit access and help Republicans stop losing elections in Georgia. Republicans wrote Georgia's election laws, but they were humiliated on Nov. 3 and Jan. 5, so they are seeking to silence Georgians, particularly communities of color, who exercised their power to change Georgia. Fair Fight and our allies are prepared to fight every Republican attempt to roll back voting rights. Their desperation to hold onto power at the expense of Georgians' constitutional right to access the ballot has never been clearer."

Raffensperger, Lt. Gov. Geoff Duncan, House Speaker David Ralston and Gov. Brian Kemp have all pushed back at various times against Trump-backed conspiracies and claims about the integrity of Georgia's elections and support some changes to voting laws, but not to the degree proposed by Senate Republicans. Duncan stripped Sens. Beach and Jones of their chairmanships and moved Sen. Brass off the high-profile Redistricting Committee after they participated in efforts to undermine faith in the electoral process. The trio also are part of a faction that challenged President pro tem Butch Miller in leadership elections last fall. Ralston said he does not support eliminating no-excuse absentee voting, opting for strengthening ID laws instead.

The secretary of state has also pushed back against an avalanche of misinformation and attacks on the way Georgia's election were run, culminating in an extraordinary early January phone call where former President Trump pressured Raffensperger to "find" enough votes to overturn the presidential race. A few days later, incumbent Republican Sens. David Perdue and Kelly Loeffler lost to Sens. Jon Ossoff and Raphael Warnock, in part because of depressed turnout in Republican strongholds egged on by false claims of a rigged election process.

Raffensperger's office ends its press release with a footnote boasting of Georgia as a "national leader in elections," though that could soon change with the flurry of legislation dropping in both chambers.

"[Georgia] was the first state in the country to implement the trifecta of automatic voter registration, at least 16 days of early voting (which has been called the “gold standard”), and no-excuse absentee voting," it reads. "Georgia continues to set records for voter turnout and election participation, seeing the largest increase in average turnout of any other state in the 2018 midterm election and record turnout in 2020, with over 1.3 million absentee by mail voters and over 3.6 million in-person voters utilizing Georgia’s new, secure, paper ballot voting system." 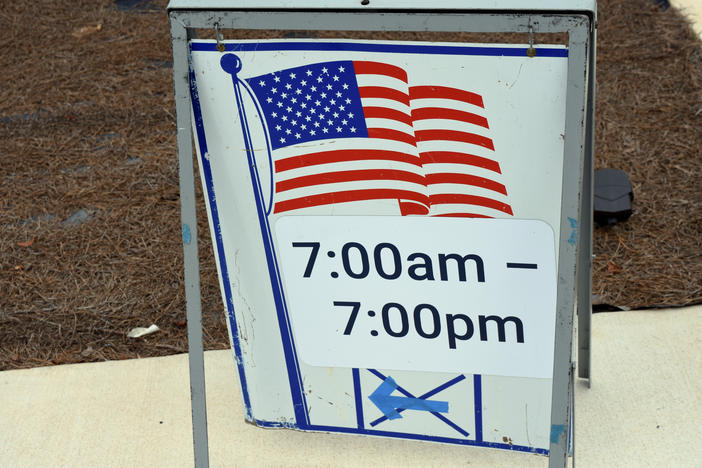 An omnibus elections bill introduced directly into a Georgia House committee Thursday would ban Sunday early voting, shrink the window to request and mail out absentee ballots and make other sweeping changes to election laws.