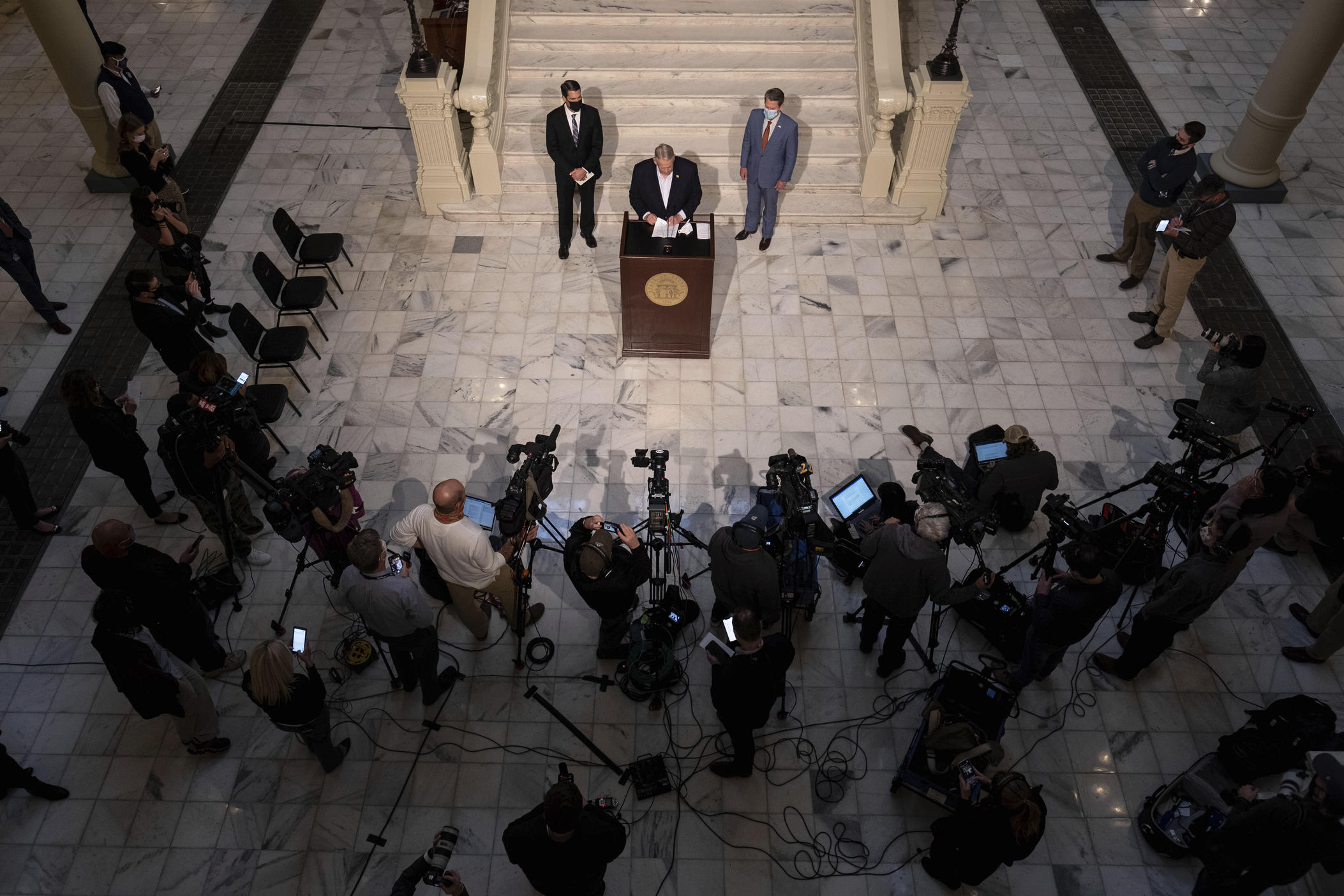 A historic day in Georgia was overshadowed by senseless violence encouraged by the president of the United States and hundreds of Republicans who have pushed baseless claims of election fraud. On this episode of Battleground: Ballot Box: what comes next in Georgia after Democrats flipped both its U.S. Senate seats.

Looking now to the results of the Senate election that saw incumbent Republicans David Perdue and Kelly Loeffler lose, we see the effect some of that rhetoric had.

As the news of President Trump’s call with Secretary of State Brad Raffensperger resonated across the country, both Joe Biden and Donald Trump headed to the Peach State last Monday for a final push to get voters to the polls in a contest that would decide what kind of agenda Biden would have his first two years in office.

“I believe in the American dream, but it is slipping away from too many of our children, not just for children growing up in the housing projects of Atlanta, or Savannah, but in urban and rural communities disaffected communities across North Georgia,” Raphael Warnock said to a crowd. “Our children need to know that they have a senator in the United States Senate who understands their struggles, understands the struggles of ordinary people, and who will fight for them.

Jon Ossoff said this to a crowd of supporters:

President-elect Joe Biden had delivered his closing message of unity and healing in Warm Springs, Ga., a week before the November election, and now he was in a 500-car pandemic parking lot rally in Atlanta on Jan. 4 asking Democrats one more time to make their voices heard.

“The whole nation is looking to you to lead us forward,” Biden said. “For real, you know it. You cannot turn on any national television show without knowing about what's going on here, what you all are doing, the power. The power is literally in your hands, unlike any time in my career. One state — one state can chart the course, not just for the next four years, but for the next generation. By electing Jon (Ossoff) and the Reverend (Raphael Warnock), you can make an immediate difference in your own lives, the lives of the people all across this country.”

Hours later, President Trump held a rally for David Perdue and Kelly Loeffler in Dalton, up in northwest Georgia, home to one of the worst COVID-19 outbreaks and one of the lowest early voting turnouts in the state. Looking at the data coming into election day on Jan. 5, we knew that Democrats were turning out at higher rates. We knew, especially in southwest Georgia, that Black voters were flocking to the polls. But we couldn’t quite know how much of it was Trump’s strongest supporters staying home.

“I want to thank you very much; hello, Georgia,” Trump said. “By the way: There's no way we lost Georgia. That was a rigged election. But we're still fighting to get it. You'll see what's going to happen.”

Much of the president’s speech was about himself, and false claims of voter fraud, and airing grievances like he had in the private call with Raffensperger, but it highlighted how desperate Perdue and Loeffler were to squeeze every vote possible from rural Trump supporters.

Perdue was home in quarantine and delivered this video message, falsely claiming he had been a longtime supporter of challenging the Electoral College.

“For weeks now,” he said, “I've been calling to object to Georgia electors in the U.S. Senate on Wednesday, January the 6th. President Trump has fought for us and we're fighting for him in a fair and accurate election.”

Perdue’s term ended Jan. 3, and he could not object. Meanwhile, Kelly Loeffler made her own announcement about objecting to the Electoral College votes from Georgia, and launched a fundraising push around it as well.

“[I have an announcement, Georgia,” Loeffler said. “On Jan. 6, I will object to the Electoral College vote.”

Well, we’ll get to what actually happened in a bit, but let’s look at what transpired at the polls on Jan. 5. Very few problems were reported, lines were short and it seemed like low turnout. But the short ballot actually masked a whopping 1.3 million ballots cast that day and, for a hot second, it seemed like a good sign for Republicans.

As results came in quickly, in part because of a new rule that required counties to process their absentee ballots the week before the election, it was clear that Democrats had overperformed in absentee voting, in-person early voting and even expectations for the historic Senate runoffs on election day. The lead coming in Tuesday was over 400,000 votes in favor of Democrats, and more than 800,000 Republicans voted on Tuesday. Still, that wasn’t enough.

Georgia elected its first Black senator and first Jewish senator and flipped control of the chamber. Years of hard work, pleas for more support and resources and a groundswell of grassroots organizing from Democrats operating out of the Stacey Abrams playbook had finally made a blue breakthrough. However, that win was overshadowed by tragic and concerning news out of the nation’s Capitol.

In the culmination of a monthslong assault on election integrity and democracy fomented by President Trump, thousands of his supporters stormed the U.S. Capitol, the center of our government, and broke in during the Electoral College vote counting. Five people died, including a Capitol police officer and a radicalized Air Force veteran whom police shot and killed as she tried to breach one of the final layers of protection left before getting to members of Congress.

It was a sad, dark day that overshadowed the end of a long, tiring and expensive campaign season in Georgia and raised several questions about what comes next and who should be held accountable. So, here’s what you need to know about Georgia Republicans’ roles in this ongoing attempt to subvert the election.

U.S. Reps. Jody Hice and Marjorie Taylor Greene led the objection to certification of Georgia’s Electoral College votes. But Loeffler, through some combination of being a lame duck unencumbered by the president and just hours removed from facing a violent mob, withdrew her support.

Even after the violent insurrection that left five dead and sent Congress into hiding, six Republican House members from Georgia voted against the Electoral College certification of other states: Rick Allen, Buddy Carter, Andrew Clyde, Greene, Hice, and Barry Loudermilk.

Georgia GOP lawmakers have been sowing the seeds of discord for weeks, pushing false claims of fraud and whipping up supporters into a frenzy against facts.

Loeffler and Perdue called on Raffensperger to resign less than a week after the election, opening the floodgates of abuse and harassment that included death threats, sexually explicit threats to Raffensperger’s wife and sustained attacks from right-wing misinformation outlets.

“Sen. Perdue still owes my wife an apology for all the death threats she got after he asked for my resignation, and I’ve not heard one peep from that man since,” Raffensperger told Fox News. “If he wants to call me, face-to-face, man-to-man, I’ll talk to him off the record. But he hasn’t done that.”

Loeffler and Perdue made last-minute pushes to question the Electoral College. Their reward was a defeat at the ballot box.

The Georgia GOP filed and supported several suits seeking to overturn Georgia’s election results or crack down on rules for the runoff, and chairman David Shafer repeatedly told lies about those suits, the president’s call with Secretary of State Raffensperger and more, helping gaslight supporters into believing Trump actually won the election.

Gov. Brian Kemp, Lt. Gov. Geoff Duncan and Georgia House Speaker David Ralston all spoke out about the attack on the U.S. Capitol and said there’s no place for that in our nation.

“That has been a disgrace and quite honestly unAmerican,” Kemp said. “In Georgia, we had peaceful protests all summer long, allowing people to let their voice be heard on an array of issues we had going on in our state and country. We certainly did not allow anarchy and we will not allow that now in the state of Georgia. Rudy Giuliani saying ‘trial by combat’ is simply outrageous. And there’s no place for that in our nation.”

But there was a place in the Georgia state capitol, where much of the misinformation about Georgia’s elections were shared in “hearings” in the State Senate, chaired by ill-informed lame-duck lawmakers, skipping standard procedures and practices and implied to be meaningful and binding instead of a kangaroo court sideshow that will lead to bad policy.

Duncan took no public action to reign in those hearings, and Ralston suggested that the secretary of state’s office have its power stripped or altered because the chief election official opted to skip a hearing where the president’s personal attorney repeated inflammatory, debunked claims that went unchallenged by those in charge.

History will remember them for what they did, and Georgians will judge them for what happens next. The legislative session is underway, and voting laws will be at the forefront. So, too, will be the future of Georgia’s Republican party and the direction of the state that is still controlled by Republicans but seems destined to change.

We’ve come full circle; what’s old is new again, as we start 2021 with the debate resting on who we vote for and how those votes are counted.