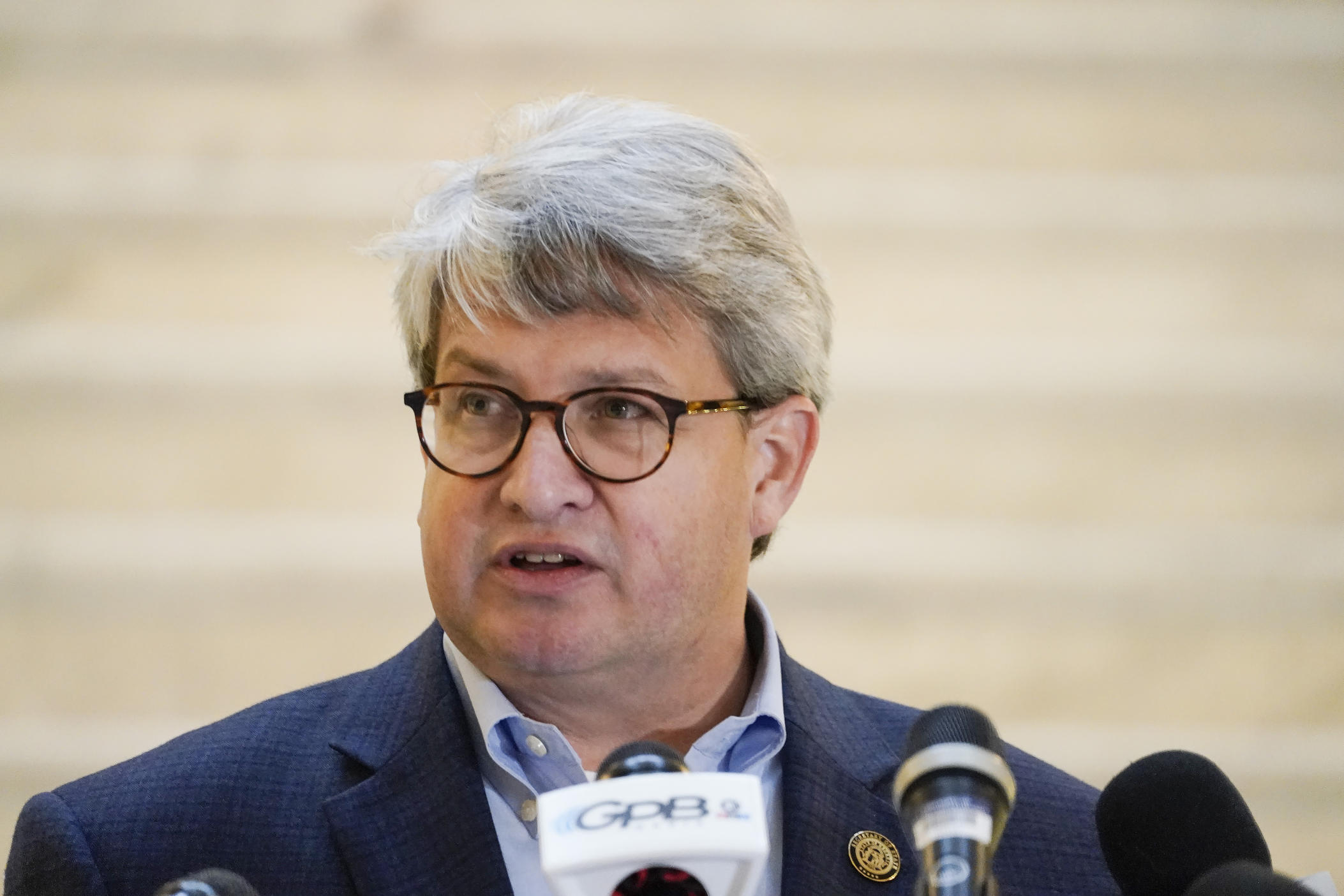 On this episode of Battleground: Ballot Box, we tackle Georgia’s recount, more misinformation from the President and long-shot conspiracy-laden lawsuits seeking to overturn the election.

Georgia election officials are almost done counting 5 million ballots for the third time in a month, several state and federal challenges have been filed in the courts and nearly a million ballots have been requested for the important Jan. 5 runoff that will decide control of the U.S. Senate.

For weeks now, the secretary of state’s office and 159 county supervisors have been trying to wrap up the Nov. 3 general election, from counting all the votes and certifying them, hand-counting all the votes again as part of a risk-limiting audit and fighting droves of conspiracy theories, misinformation and questions about how the voting process works.

By law, President Donald Trump could and did ask for a machine recount of the election, because he lost by a margin less than half a percentage point, so last Monday, we caught a glimpse at when and how we’d tabulate the votes for a third time.

Some counties would work over the Thanksgiving holiday, some would take their time to gather staff and make preparations — and all of them must finish by 11:59 p.m. Dec. 2. The difference from the risk-limiting audit to the recount is the introduction of high-speed scanners, but Gabriel Sterling with the secretary of state’s office said that would be one of very few changes.

"My assumption is when we use the machines again, we should be hitting right about the same number: a ballot difference of about 12,670," he said.

The results we have seen from the recount so far show very little — if any — variation from the original count with President-elect Joe Biden winning the state. But, of course, this is 2020 and nothing goes smoothly, especially not if you’re Fulton County. Its recount process was delayed over the weekend while it dealt with a server issue.

"The real issue is a Fulton County employee made several compounding errors," Secretary of State Brad Raffensperger said Tuesday. "Instead of following the procedures that my office and the vendor laid out, Fulton County once again cut corners, the biggest one being he backed up the election project on the server itself instead of on an external backup. Because of that decision, they lost the ability to upload hundreds of thousands of scanned ballots. Processes and procedures exist for a reason."

Fulton officials dispute that characterization, with commission chairman Robb Pitts saying there was no need to single out the county.

"I cannot speak to what the other 158 counties are doing, but I can tell you beyond a shadow of a doubt that in Fulton County there was no hanky-panky whatsoever with respect to the recent election," he said.

By the end of the day Wednesday, the final ballots should be scanned and results of the recount will be uploaded to show that, for the third time, Joe Biden narrowly won the state’s electoral votes.

First, we’ll note that it’s extremely rare for the courts to intervene in how an election will be conducted — or was conducted — unless there is really strong evidence that something needs the intervention.

The cases filed in Georgia recently have largely fallen short of that mark, in some cases spreading fantastical conspiracies alleging international plots to steal the election away from President Trump.

A motion filed to block Georgia’s certification of results was filed by Lin Wood, an Atlanta attorney who has as recently as 2018 voted in Democratic primaries but now supports President Trump. Judge Steven Grimsberg, a Trump appointee, denied that request for lack of standing and something called laches — basically, waiting too long to file a complaint against something from several months before.

During the hearing, Wood’s lawyer was stumped by basic questions from the judge, and attorney Russ Willard from the state attorney general’s office eviscerated the last-minute request to block certification.

"The election is over, and rather than accept that his preferred candidate has lost, plaintiff seeks the largest disenfranchisement of eligible electors since the abolition of the poll tax and other vestiges of Jim Crow in the state of Georgia," Willard said.

That suit is now before the 11th Circuit Court of Appeals, which asked, among other things, if the request is moot since the results are certified.

But that case was just the start.

The so-called “Kraken” suit wasn’t all it cracked up to be. The main argument repeats a debunked conspiracy theory that alleges Georgia’s voting vendor teamed up with a competitor to conspire with late Venezuelan leader Hugo Chavez to rig votes. So-called anonymous whistleblowers provide so-called evidence, dozens of recycled affidavits show no evidence of wrongdoing — but plenty of misunderstanding of election processes — and allege, in short, that we've got to throw the whole thing out.

Powell’s lawsuit also misleadingly cropped out dates from official state certification forms, included declarations that cite shaky statistics and ultimately, while the process is still ongoing, the judge has suggested there is “precious little proof.”

None of the lawyers on this suit, or any of the other suits, have been election lawyers, by the way. Another challenge filed cites a YouTube video as evidence of thousands of ballots that should not be counted.

WIll any of these be successful? Not likely. Does it contribute to distrust of the election system? Definitely.

All of this has been egged on by top Republican lawmakers and politicians in Georgia who are contributing to a fictitious narrative, created by President Trump, that he rightfully won Georgia and reelection but that massive fraud occurred — despite multiple states (and multiple other Republicans) saying otherwise.

There have been consequences. At recent campaign events, everyone from Sen. David Perdue to GOP Chairwoman Ronna McDaniel have been fielding questions about why they won’t support President Trump’s fight to overturn results, or why they should trust the system.

Perdue and fellow Sen. Kelly Loeffler both face a tight runoff battles against Democratic challengers Jon Ossoff and Raphael Warnock, and every vote will count.

President Trump is coming to campaign on Saturday, but there are concerns he could continue attacking Gov. Brian Kemp and Secretary of State Brad Raffensperger and veer off message. Vice President Mike Pence is also coming to Savannah on Friday, and a new Super PAC has released a radio ad from Donald Trump Jr. strongly encouraging Republicans to participate in the Jan. 5 runoff.

There are more harmful consequences, too.

A young technician faced death threats because social media conspiracies falsely accused him of altering vote totals in a recount, Sterling said. The secretary of state’s home address was posted, and Trump supporters have held honking caravans outside his house repeatedly and some have even breached his property. Then there’s language used by some that accuse election workers and officials of treason.

Sterling said that the president — and Perdue and Loeffler and state lawmakers and other people in power — need to do something about the dangerous rhetoric being thrown about.

"This is elections, this is the backbone of democracy, and all of you who have not said a damn word are complicit in this," he continued. "It's too much, yes, fight for every single vote. Go through your due process, we encourage you use your First Amendment. That's fine."

But that 20-something who got threats with his name and a noose, Sterling said? He's just someone who took a job. The people making those threats? Someone has to answer for it, he said.

Now, the president is coming to town on Saturday. And it’s likely he’s going to talk about the election, and talk about Gov. Brian Kemp and Brad Raffenspeger, and talk about other conspiracies that some officials say could keep people from voting in the runoff — and could inspire something worse.

Battleground: Ballot Box is a production of Georgia Public Broadcasting. Our editor is Wayne Drash, our intern is Eva Rothenberg, our show is mixed by Jesse Nighswonger and the Director of Podcasting is Sean Powers.