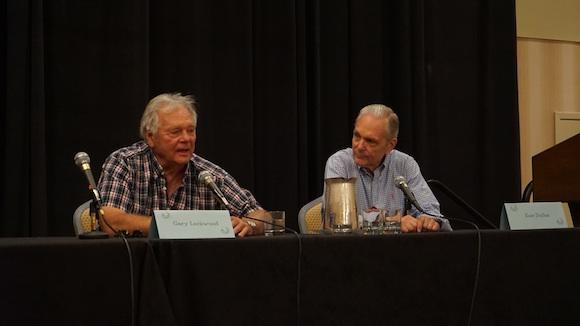 Stanley Kubrick's "2001: A Space Odyssey" has earned its classic status in film history. Start with the director's famous eye for composition and telling detail. Add in Douglas Trumbull's groundbreaking, Oscar-winning special effects. Mix in Kubrick's canny use of classical music themes like "Also sprach Zarathustra" and "The Blue Danube." Top it all off with the film's final 20 minutes, with its weird lightshow and weirder ambiguity that still spark debates after all these years.

All of that and more has landed "2001" on many an All Time Great Movies list. But when it was first released in the spring of 1968, critics gave it "very mixed reviews," says Keir Dullea, who played Dave Bowman in the film. Then the studio, MGM, "kind of caught on to the fact that young people were smoking funny cigarettes" when they saw the film. MGM quickly came up with new posters for the film: "2001: The Ultimate Trip."

I was 8 years old when the movie came out, and I begged my parents to take me to see it. Soon that poster would adorn my bedroom wall. I'd give anything to have it back, but on Friday I gladly settled for memories about making the film from Dullea and co-star Gary Lockwood, who appeared at a "2001: A Space Odyssey Reunion" panel at DragonCon 2015.

Scroll down to watch the crowd sing the 2001: Space Odyssey theme song to welcome Lockwood and Dullea in.

Lockwood (Frank Poole in the movie) clearly enjoyed his raconteur role on the panel, sharing funny stories about previous geek culture conventions. At one such gathering, a fan remembered that Lockwood starred in the "Star Trek" pilot episode and has asked for a photo with a specific inscription: "I'd like you to write something that happened between you and Kirk at the Academy," Lockwood recalled. As in Starfleet Academy, which, uh, doesn't really exist, dude.

Neither Lockwood or Dullea had to audition for their roles in "2001." Kubrick chose them based on earlier work, and both actors are aware of the special place "2001" has in the hearts of movie lovers and fans of science fiction. "We're smart guys," Lockwood said. "We realize that we're very lucky that both of us were picked by Kubrick." Lockwood added that John Lennon of the Beatles gave away two tickets for every performance of "2001" at a theater in London's Leicester Square for a year. "That's how important he thought it was."

Dullea told how he learned he'd been cast as Bowman. He had been shooting a movie in London for director Otto Preminger and decided to visit a nearby carnival's fortune-teller. "He said, 'do you work in the sciences? Because I see a rocket ship in your palm.'" Dullea went home and was told by his wife to call his agent, who broke the news to him that he'd won the part in the Kubrick film. As he was reading the script, he recognized the plot from Arthur C. Clarke's short story, "The Sentinel," which Dullea had read as a 13-year-old science fiction fan.

Despite Kubrick's penchant for demanding actors give multiple takes of scenes, both actors recalled a happy experience making the movie.  "He (Kubrick) never raised his voice. He was always calm and quiet," Dullea said. "He was so ultra-prepared that he could relax. You never felt you had to be careful with him." Lockwood had been a fan of Kubrick's since seeing "The Killing." "It was the first time I wanted to see a movie poster in the (theater) lobby and see who made made the movie."

Dullea and Lockwood received a special introduction from the near-capacity crowd at DragonCon: audience members sang the opening notes from "Also sprach Zarathustra" as the two actors walked onto the stage.