Leonard Nimoy Was, and Always Shall Be, A Geek Culture Hero 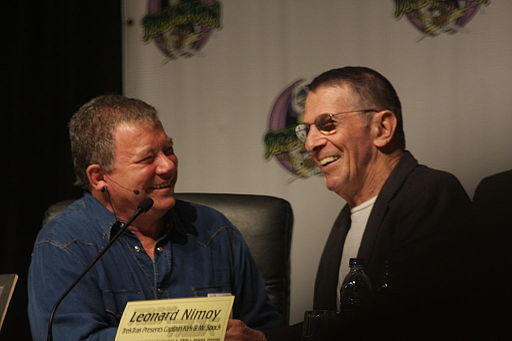 Kirk may have been the one who threw the punches, kissed the women (human and alien) and barked orders from the Enterprise's captain's chair. But it was Spock who could disable you with a simple Vulcan neck pinch, and disarm you with a raised eyebrow.

To me, that made Leonard Nimoy the cool one in the "Star Trek" cast.

While much credit for that goes to show creator Gene Roddenberry and its gifted writers, it was Nimoy's talents that brought the ship's first officer to life in the original 1960s television show and in the series of Star Trek films in the 1970s and 80s. Nimoy was also a respectful caretaker of the character over the years, so much so that when J.J. Abrams resurrected "Star Trek" for the movies in 2009, it wasn't Shatner who made an important cameo appearance; it was Nimoy as an alternate version of Zachary Quinto's Spock. It was more proof of the character's special place in science fiction/geek culture history, and of the unique way Nimoy inhabited the role.

Many actors chafe under the stress of playing the same role over several years. Sean Connery made 007 a cultural icon, then went off to try other things. Nimoy had his own initial struggles with Spock, as he wrote about in his first autobiography, 1977's "I Am Not Spock." But he realized the impact he had on generations of science fiction fans, as you could tell from the title of his second memoir, 1995's "I Am Spock."

He knew what a gift of an original character he was given by Roddenberry - a half-human, half-Vulcan who personified the logic-vs.-emotion conflicts that rage within us Earthlings every day. He could indeed drop you like a sack of potatoes with a Vulcan pinch, but could also unlock key clues to mysteries with his mind-meld. That would give Nimoy a chance to do some actual acting, as was also the case in the episode "This Side of Paradise," where the spores from alien flowers bring his human emotions to the fore. Hey, did Spock just kiss a girl?

Nimoy was able to show off his other talents acquired while playing Spock. He directed "Star Treks" III and IV along with "Three Men and a Baby," which packed theaters in 1987. I remember his excellent acting work in a 1991 film, "Never Forget," in which he played Auschwitz survivor Mel Mermelstein, who took on Holocaust deniers in a court battle.

But on this day of Nimoy's death at the age of 83, I'm remembering him as Spock, just like many others who are memorializing him on Twitter. He certainly did meet the needs of the many sci-fi fans out there. Nimoy's Spock was a pretty good hero for a generation of nerds; he was intelligent, could calmly (and at times hilariously) parry Dr. McCoy's insults, and was loyal to his friend James T. Kirk. He also had a hidden reservoir of strength and courage.

In a show full of special effects, Leonard Nimoy provided the best onscreen magic: he created a enduring, much-loved character.