Residential Meets Retail: How To Remix An Atlanta Suburb 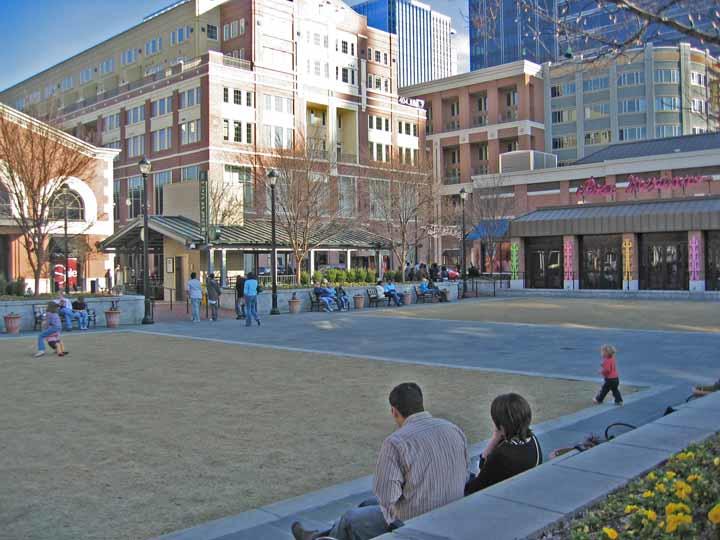 John’s Creek is an affluent suburb in northeast Atlanta. It's fairly small -- only about 80,000 people live there -- but it has big dreams.

The city wants to transform some of its 728-acre office park into a town center with homes, shops and offices. John's Creek mayor Michael Bodker calls the redevelopment project "The District," referring to an area that would become the city's downtown sector. Bodker believes this project will broaden the city's tax base.

"John's Creek does not have a healthy and sustainable tax digest," Bodker said in his most recent State of the City address. "Homeowners are disproportionately supporting the load by covering 81 percent of the tax digest versus 19 percent for commercial." Without doing something to change the current model, he says, there will be less money for public services like road repairs.

Similar walkable, urban developments are popping up all around the country. Ellen Dunham-Jones, an architecture professor at Georgia Tech and co author of Retrofitting Suburbia, says that's in part because more communities want to attract a younger workforce. Listen to her talk about that here:


Generally, such large scale, mixed-use projects are discussed and debated and after construction begins, they’re often criticized heavily. On Second Thought wondered if it would be beneficial to have a conversation about common mistakes made with big developments before plans are finalized and get some advice for John’s Creek on how to move forward.

So, we asked two experts in real estate and urban planning for tips. Here are their suggestions.

Geoff Koski, Senior Real Estate Consultant at Bleakly Advisory Group and President of the Atlanta chapter of the Congress for the New Urbanism (CNU) says:
• Create the framework. A framework for redevelopment that will allow the city to achieve the vision and then let private development create the actual development.
• Be patient. There will be ebbs and flows in the development cycle. 700+ acres could take a decade or more. But, again, create the proper framework that will allow the city to achieve its vision and stick with it.
• Don’t get too hung up. If possible, don’t get hung up on particular uses of individual land parcels. Successful urban centers often have buildings that change use over time (from office to residential, for example). Create a vision for the form of the buildings on the parcels and allow the market to respond to which uses (residential, office, etc) will go there. This is call “form-based planning.” This could quicken the pace of the development.
Note: the mayor is absolutely right to look at maximizing the value of the land in the district. Assessing the contributing value on a per acre basis, which he is doing, really shines a light on why increased density in this area could be a savior over time for the residents and their tax bills.


David Reiss, Law Professor at Brooklyn Law School and Research Director of the Center for Urban Business Entrepreneurship (CUBE) says:
• Think transit-oriented design. Integrating transit is the sustainable option for new development. Young people without cars and senior citizens who have grown less comfortable driving would prefer an alternative way to get around. If the mayor wants families to put down lifelong roots, mass transit can be part of the solution.
• Listen to the people’s voice. Town halls and surveys are important for public opinion, but people often say things and act differently when they have to open their wallets. Make sure people are on board in every step of the process.
• Be flexible. Is it really a plan if it is geared to be completed over 30 years or more? Which constituencies will ensure that the plan is implemented over such a long time frame? Be flexible with the design because it will most likely change over time. In terms of funding, other similar proposals have large private or public partners (like Mesa del Sol in New Mexico, which has Forest City Enterprises and the University of New Mexico as partners) who will be committed to the plan for the long term and will be directly invested in it.


GA Tech architecture professor Ellen Dunham-Jones also offers this caution to neighborhoods that want to redevelop long-term: "There's a real question of getting some developers to put their money at risk, to get bankers to buy into this, to prove there is enough of a market for urban living in John's Creek," Dunham-Jones says.

In other words, sometimes projects sound good on paper, but success hinges on getting people on board.

LISTEN to Koski and Reiss discuss the John's Creek redevelopment plan on On Second Thought with Celeste Headlee here: