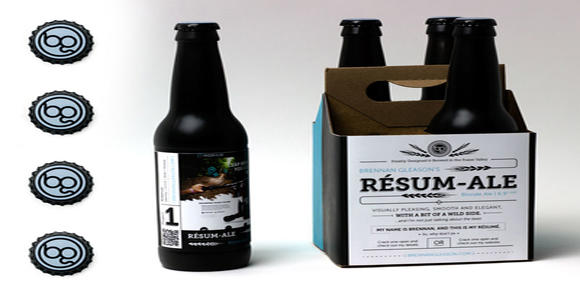 It's no secret that it takes a lot to get noticed in today's job market. Sometimes, it's about who you know more than what you know and others, it's about the one detail that caught the hiring managers eye. The question is, when there are hundreds if not millions applying online to the same company, how do you stand out? Do you send a hard copy of your resumé to the hiring manager? Do you call them to introduce yourself? Do you connect with them on LinkedIn and other professional networking websites?

While all of the above are good starting points, Brennan Gleason, a recent graduate of the University of theFraser Valley in Abbotsford, British Columbia, took it a step forward. Gleason incorporated a hobby and his profession to catch the eyes of many to where he had more job offers than he could have dreamed of stating, "I've always been inspired by those wacky resumes, and I recently got into home brewing and I thought: Why not put the two together?"

That he did as he sent out four-packs of his brew, a smooth blonde ale with 6.9% alcohol content. On the four-pack cardboard package, Gleason printed a description of himself and the beer as well as supplying information about his professional and educational experience on the back. Essentially, a resumé printed on a four-pack of beer, he called it,Resumé-Ale.Gleason's idea was a major hit for many employers; he received three job offers from top contenders and ultimatley accepted one with digital marketing agencyTechtone. As to how his current employers thought of the creativeResumé-Ale, Gleason says, "They were definitely kind of thrown off at first. They were like, ‘What’s this?’ But when they actually saw it, they thought it was great and really liked the idea."

Have you ever sent a resumé in with a clever idea such as Resumé -Ale? I knew a guy who once dressed up like a pizza delivery guy so he could personally deliver to the hiring manager, trick being that when he opened the pizza box, his resuméwas on top of the pizza!