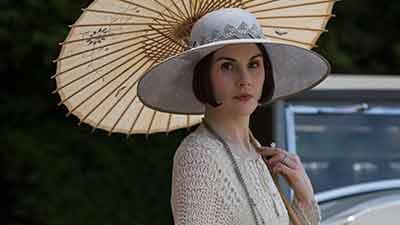 On Sunday nights at 9 p.m., we usually watch Downton Abbey. We decided not to let that habit go just because we aired the series finale last week.

We’re throwing our own tribute to Downton Abbey Sunday, March 13 at 9 p.m. by airing the series finale again in all of its fun and glory. This is not just the encore of the final episode. This is a rebroadcast of the live finale event we hosted at GPB headquarters last weekend.

You’ll get to see members dressed in their loveliest Downton Abbey period outfits, what people were saying on Facebook, Twitter and our live chat room about the episode and who won our costume contest.

Stick around afterwards to watch the BAFTA Celebrates Downton Abbey special where the cast gets together again - even cousin Matthew is resurrected in a tux! Plus Dame Maggie Smith and Hugh Bonneville delight in a humorous skit.

Downton Abbey is a juggernaut. The series finale scored a 9.6 rating overall and is PBS' best performing show. Of course, we could never have aired a show like this without your help. So we urge you, when you watch the rebroadcast of the finale, to heed the calls of our on-air hosts to be generous and give a financial donation. You can also give online here. And you never know, a new Downton Abbey could soon be discovered because of your monetary contribution!