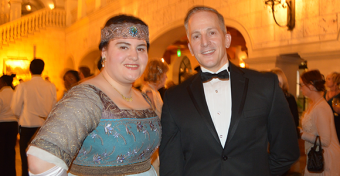 It’s not uncommon while watching Downton Abbey to think to yourself “I’d like to live there.”

But beyond the trials and tribulations the Crawley family endures, it’s perhaps the process of becoming glamorous and living extravagantly that causes us as viewers to long to step back in time and experience it, if just for one night.

It’s advertised on the Sea Island resort's website every year during their Downton Abbey Weekend that regardless if you dress up upstairs or downstairs, you’re bound to enjoy yourself at the final Downton Abbey costume ball. And the reasons mentioned above do certainly factor into the merriment. But it’s a sense of camaraderie too, to not only step out of the world of errands and meetings but to surround yourself with people who, like you, are pleased to immerse themselves in all things Downton, dressing the part included. It’s a far cry away from watching the show on your own with a glass of wine or cup of tea. In fact, it’s much better. Since you may not have attended, here's a review of what the wonderful affair was like.

A Review Of The Costume Ball

The cozy lobby with soft sofas and wooden board games is transformed to reveal a dance floor, a line of servers with champagne and a roaring fire. In fact, it’s just like when Lady Rose surprised Robert in Season 4 with the band from The Lotus Club. An ornate cake decorated to look just like Downton is the centerpiece of the room and beyond indulging in glasses of wine and cutting a rug with your friends, you’re taking and posing for pictures.

I’ve never been to a post-awards show party (though post-Oscars coverage is an indulgence of mine), but this is precisely what I imagine it would be. Instead of a selfie with a celebrity though, you’re asking for a picture with Mrs. Patmore or Lady Mary. Most of the time, everyone is more than happy to pose with you and likely wants a photo of their own to commemorate the event.

That isn’t to say that celebrities are scarce. If you love Downton, they aren’t hard to find in the room. Each year, the invited guests are happily surprised by the effort and creativity put into the fans’ costumes and often want to pose with the costumed guests. It’s heartwarming to see the individuals responsible for bringing the show we love to life be equally enthusiastic towards us.

Take A Look At The Photo Gallery Of The Costume Ball

From the reception, we’re led into the dining room filled with round tables and elegant settings. It’s a set dinner, so there are no menus to get in the way of dinner conversation. While in Downton it’s customary to alternate whom you speak to by each course, this dinner has all the table manners with none of the stuffiness. It’s not difficult to find a common topic to discuss over three delicious courses.

Coffee and tea service end the meal, and after a short introduction we’re shown the newest episode a day early on two giant screens. And unlike the aforementioned experience of watching Downton alone with a glass of wine, the crowd isn’t afraid to laugh, mourn and cheer at the appropriate moments - this particular time, it was Dowager Countess calling out Lady Cora during the open house day for charity. It’s a sense of kinship and kindred spirits you don’t get while watching alone, the ability to react and discuss in person keeps the series, though it’s ending, alive.

The series finale of Downton Abbey airs Sunday, March 6th at 9 p.m. Join our online parties on Facebook, Twitter and via live chat on this blog.