VIDEO: That Time Mrs. Hughes Popped Up At Dragon Con 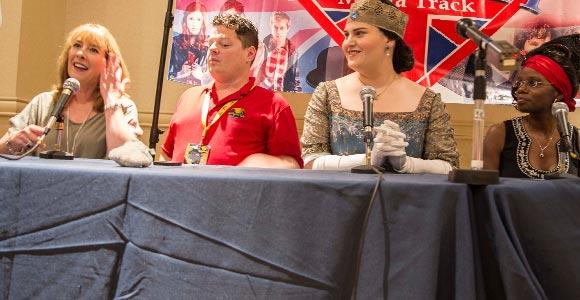 Fellow Desperate for Downton blogger Rosemary Jean-Louis and I will be in attendance covering it, so follow our posts social media Twitter, Facebook and Instagram to experience it with us. And return to this blog next week to get a wrap up in photos and video.

This won’t be our first time rubbing elbows with Logan. Rosemary and I remember that time we met the lovely Mrs. Hughes at Dragon Con in 2014 during the Downton Abbey panel.

(We have video to prove it! Scroll down to watch the full panel video).

She was a surprise guest, as she was accompanying her husband, actor Kevin McNally, to the convention (he was an invited guest to the event). However, once word had gotten out that she was there, a little Dragon Con magic allowed her to attend and speak on the Downton Abbey panel, currently held annually by the convention’s BritTrack.

Phyllis Logan, surprised guests and herself at Dragon Con in 2014 by popping up to speak at a Downton Abbey panel.

She was greeted by the entire room standing as she entered, and seemed very surprised and flattered that so many fans were eager to listen to her every word. With her husband in the audience, she happily accepted questions from panelists and attendees.

She discussed the process of physically becoming Mrs. Hughes, which actors she loves working with, whom she’d love to play if she were an upstairs character and more.

Watch the entire video below.

Were in the audience in 2014 when Phyllis Logan showed up at the Downton Abbey panel? If so, tell us what you thought.