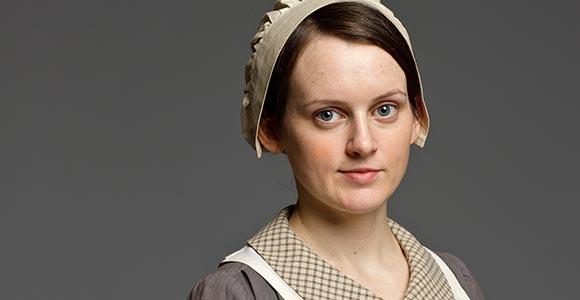 Downton Abbey season 6 episode 4 brought out Thomas’ conniving ways, Daisy’s immature impulses and a flash from the past doing well.

Scroll down to join the live chat at 9 p.m. to talk about this and more.


The latter turned Thomas into his mean butler persona. (You never know which Thomas you’ll get these days!) Here’s what happened: Former housemaid Gwen Dawson returned to the Abbey with a new husband and new last name - Harding. The Hardings visited Downton to see Robert’s sister Lady Rosamund about donating money to Hillcroft, a college for women.

A housemaid no more, Gwen walked through the front door and didn’t say much to her former workmates, which got under Thomas’ skin. On top of that, the Crawleys didn’t remember her either so she was treated like any other upper crust guest and invited to eat lunch. Cue Thomas embarrassing Gwen at the table by bringing up that she used to work as a housemaid at the estate.

Yes awkward! But Gwen salvaged the situation by explaining how Lady Sybil helped her land her secretary job and move up in the world. All was smoothed over once everyone began a round of reminiscing about how good and kind Lady Sybil was and how she helped Tom move up in his station by marrying him.

Meanwhile Daisy almost lost her job - yet again - by marching to Lady Cora’s room to complain about Mr. Mason not getting the vacant tenancy at Downton. Thankfully the Crawleys shared the news that Mr. Mason was awarded the farm job just before Daisy opened her big mouth.

Too bad she didn’t get to talk first. It would have made great chat room fodder to see how Cora and Robert responded.

There will be much to discuss tonight during our live chat for Downton Abbey season 6 episode 5. Scroll down to the chat box below, enter your name and comment to take part in the conversation. Remember we do not air the episode online so watch from your home tv. You can return on Monday to gpb.org/desperatefordownton to see the episode online.

Do you think Lady Mary will find happiness with the easy on the eyes, but unfortunate racing buff Henry Talbot? And what sort of mystery illness is Robert suffering from? We hope he stays conscious this episode!