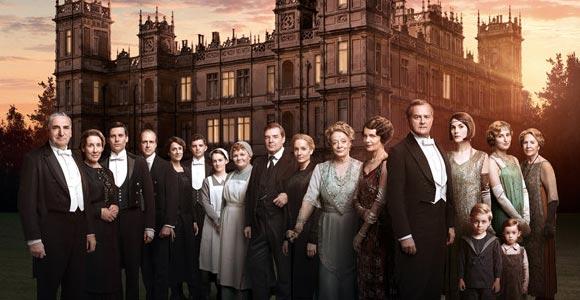 It’s a wrap for Downton Abbey. How do I know? Photos from the show’s last ever wrap party at the Ivy this past weekend have surfaced.

Her sister from another mum, Laura Carmichael, also dazzled in a black A-line dress.

Scroll down to see the photos.

It was a pleasure to make up these two wonderful women for the final wrap party last night. #DowntonAbbey pic.twitter.com/qM0RVrKCBO

It appears the gang was apparently all there including actress Lily James and Allen Leech as seen in this photo.

The @Telegraph has so many great photos of the #DowntonAbbey cast at the series wrap party. http://t.co/H728O61vgv pic.twitter.com/khAReqkyFL

Since James and Leech are not featured in the official Downton Abbey season 6 promotional image, some speculated whether they would appear in the final season. (James had a pretty busy schedule earlier this year promoting her film “Cinderella”.) But this photo indicates she’ll likely pop up in the final series.

No doubt, actress Joanne Froggatt who seemed caught off guard in this photo from the party, will play a large role in the final season. The Bates have such a tumultuous and unresolved storyline. But she looked perfect in this black mini sheath too.

For more photos from the party, check out this article from the The Daily Mail.

Tell us what you think of the party photos. Wish you were there right?