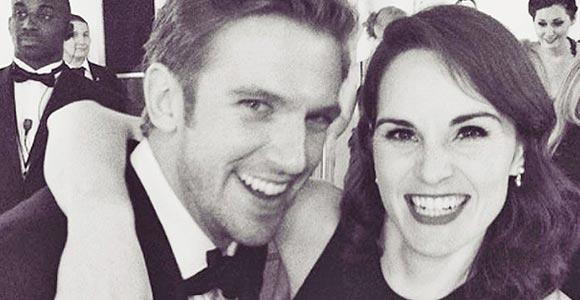 Downton Abbey's Lady Mary and Cousin Matthew were reunited for one night and it felt so good!

Dan Stevens and Michelle Dockery came together for a BAFTA event Tuesday in Richmond, England.

Dockery posted the photo of herself arm draped around Dan Stevens on her @theladydockers Instagram account with the caption: “Reunited. @thatdanstevens I've missed this face."

How did it make you feel to see Mary and Matthew together again in this photo? Let us know in the comments section.

"BAFTA Celebrates 'Downton Abbey'" brought cast, producers and crew together once more to toast the show’s sixth and final season. During the event, creator Julian Fellowes, Liz Trubridge and executive producer Gareth Neame received a BAFTA Special Award given by Julie Walters to honor the show’s impact on international audiences. (The Harry Potter franchise is the only other group to receive such an honor.

Ever the prolific photographer, Michelle Dockery snapped a shot of the trophy and shared it on social media.


Thank you @BAFTA for a magical evening #LastDaysOfDownton

Dockery and other cast members have been saying goodbye to fans and each other through social media as they finish up shooting the Downton Abbey.

One featured Michelle Dockery looking at Lady Mary’s bedroom for the last time.

Since Julian Fellowes is not on social media, he opted to say goodbye to the Downton mates with a traditional written message featured below:

“You know, it’s almost strange,” he said. “I’ve lived with these people for seven years now. They’ve taken me and all of us to the top of the mountain. We’ve had this incredible global phenomenon. Most people in this business, even those who have been very successful, never have something like that…Each time I realize I’ve written the last line of a particular character, I feel rather sad. At the same time I don’t think we’ve done the wrong thing. I’ve never felt, ‘Oh my God, what are we doing? This is a mistake!’”

Well you can always write the Downton Abbey movie script, Julian, to cheer yourself up!