Welcome To Downton Kate! Highlights Of The Royal Visit 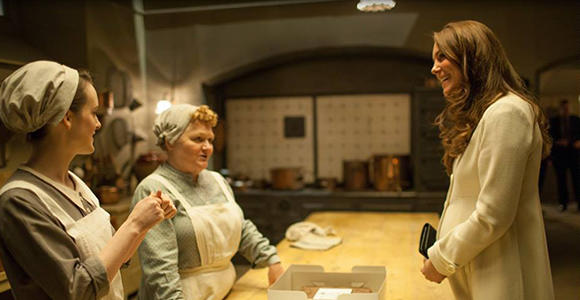 Welcome to Downton Abbey, Kate Middleton - and by Downton Abbey, I mean the famous Ealing Studios where the servants’ parts of the show are filmed. The Duchess of Cambridge got an exclusive tour and meet and greet with the cast and crew today.

The itinerary included a pit stop in the hair and make-up department, a cast and crew portrait and a viewing of a scene being filmed. Judging by the photos tweeted and recaps written, everyone had a lovely time.

Because you and I could not attend (maybe next time), I’ve pulled together highlights of the royal visit that you can consume at your leisure. Enjoy!

Greeted by Julian Fellowes and George Upon Arrival

Surrounded by a crowd of onlookers who also gathered to meet her, Her Royal Highness (Kate to us) was greeted by Julian Fellowes and given a posey and later a wooden train by child actor Zac Barker. He and twin brother Oliver play George.

Kate got to check out the costumes up close and personal as well as see how the make-up magic happens. Poor Phyllis Logan just happened to be getting her face done when Middleton stopped in. We don’t know whether that was contrived, but Rob James-Collier was also there and quipped, “ "You've come just at the right time, Phyllis is about to  have her Botox put in."

Due to illness, Dame Maggie Smith was unable to be present for the royal visit. But Kate met most of the rest of the cast including Raquel Cassidy (Baxter), Kevin Coyle (Mr. Moseley), Brandon Doyle (Mr. Bates) and Michelle Dockery (Lady Mary). On the kitchen set, Lesley Nicol (Mrs. Patmore) and Sophie McShera (Daisy) presented her with cakes.

The Duchess of Cambridge Seemed to LOVE her visit to @DowntonAbbey at @EalingStudios this morn #DuchessAtDownton pic.twitter.com/rfAsZSHbMZ

Here are a few more photos of The #DuchessAtDownton - thank you @DowntonAbbey for having us! pic.twitter.com/ePzH4LByls

The Duchess of Cambridge visits the #DowntonPBS set! To be a fly on that wall... #DuchessatDownton @PBS pic.twitter.com/gfDX2SdyrL

Molesey and Baxter offer to polish The Duchess's shoes in The Boot Room #DuchessAtDownton pic.twitter.com/AGIWhWDWHA

A Cast And Crew Portrait

Kate snapped a portrait with the cast and crew. I can imagine they were reduced to puddles like fans like us would have been.

The creator, producers & cast of award-winning production @DowntonAbbey gather for a photo with HRH #DuchessAtDownton pic.twitter.com/mCDA1Tk8Kv

The "Downton Abbey" set is notoriously secretive. No word on what scene Kate watched. But I hope she is allowed to tweet it out soon.

Here Is A Video Recap From ITV