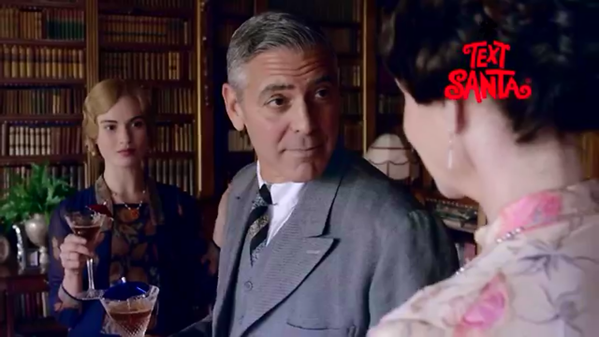 Back in September, I mentioned that I learned that George Clooney would be appearing on “Downton Abbey” in a special charity skit for the charity  event #TextSanta.

While the entire skit hasn’t been published online yet - I’m not sure it ever will - a snippet of his appearance is now available.

And George looks so dapper!

In the scene, Lady Cora calls a man with his back turned to her “Dearest.”

“Lord and Lady Carlyle have asked us over to dinner tonight,” she says to him.

George turns around, faces her and gives her his famous wry smile.

Unfortunately our preview ends there as a graphic that reads “George has done his bit, now you can do yours” appears encouraging people to donate to #TextSanta.

I wonder why Lady Cora addressed him with such an affectionate term? Is George playing a relative?

It’s possible Cora was speaking to Rose. Lady Rose appears in the corner of the room and George’s character is facing her at the start of the scene.

Judge for yourself and if you were lucky enough to see the entire skit, tell us about it and the character George plays in the comments below. Also check out how the Dowager Countess reacted when George was on set filming his scene. I would have done the same thing!