Downton’s Dowager Based on a Fellowes 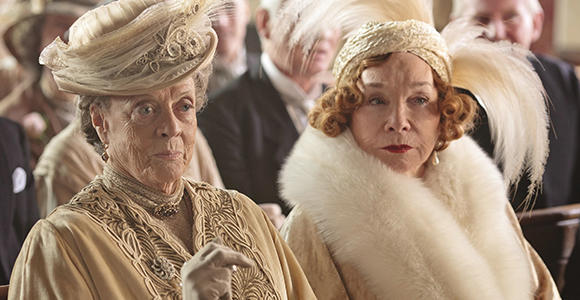 I recently uncovered this nugget in an older Masterpiece Theatre column: Downton’s dowager Countess is based on a Fellowes’ relative.

Isie apparently had the same “mix of severity and kind heart.”

“She was formidable, a woman who had married into a great fortune but suffered her own difficulties and tragedy,” says Fellowes. “During the First World War, she went to the docks to greet her husband returning on leave. She expected him to run down the gangplank and sweep her into his arms; instead, he was carried off dying.”

On the show, Violent has spoken of her past tragedies in veiled terms. “I do not speak often of the heart,” Violet has said in season 3. “Since it is seldom helpful to do so. But I know well enough the pain when it is broken.”

We’re supposed to learn more about Violet’s past in season 5 and there is a plot that involves her and Lady Rose taking in Russian refugees.

Jessica Fellowes has written several books about "Downton Abbey". A new one, "A Year in the Life of Downton Abbey: Seasonal Celebrations, Traditions, and Recipes", co-authored with her uncle, comes out in October.

Last year, I interviewed her about Season 4 and she had much to say about Lady Violet’s witticisms. Check out the "Your GPB" iPad magazine interview here or download the app to play it.