George Clooney May Get Married at Downton Abbey - so We Hear 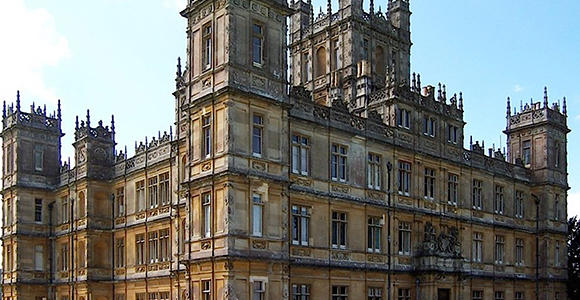 Update - June 10 3 p.m. - As of this writing, newer reports state he may wed in his house in Italy. But it was fun to speculate :)

The world’s most famous former bachelor may tie the knot at Lady Mary’s house. George Clooney may get married at Downton Abbey otherwise known as Highclere Castle - so we hear.

British and American media outlets have gone crazy speculating that the nuptials may take place there after Clooney whisked his bride to be Amal Alamuddin for a not so secret late night visit. Hugh Bonneville, now a Clooney pal after they appeared together in “The Monuments Men,” arranged the private tour.

Alamuddin is among the long list of prominent people who are Downton Abbey fans. "The Daily Mail" reports while she doesn’t watch much television, she loves "Downton Abbey".

She was apparently blown away during the estate tour. A source told the "Daily Mail" that, "when [Clooney] saw his bride-to-be’s reaction to the spectacular Victorian castle, set on 1,000 acres of parkland, he began making some discrete inquiries about having their wedding performed there. And he was told they would be most happy to accommodate them!"

Media reports say the wedding may take place in September.

You Can Get Married at Highclere

You can get married at Downton Abbey if you have the money and the time. According to the castle website, you can rent the venue for a little over $25,000.

The castle is licensed for a civil ceremony and many of those take place in The Saloon. Brides can walk down a sweeping Oak Staircase as over 100 guests look on.

Smaller parties can hold their event in The Victorian Library or Dining Room.

Highclere also has a wedding coordinator, in-house caterers and a chef. Photographs can be taken but can be used for commercial use.