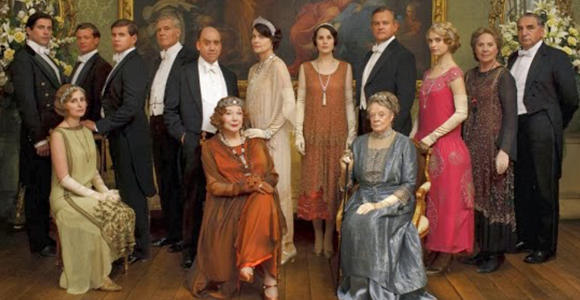 If you’re a member of the Downton Abbey cast, stay away from Twitter while the season is filming. That’s the message Julian Fellowes is sending in so many words after a new castmate tweeted out a photo of himself on set.

Richard E. Grant was added to the Downton family to play an art historian and guest of the Grantham house. Grant saw no harm in tweeting a photo of himself in period costume on the set.

That didn’t sit well with writer/creator Julian Fellowes. “He’s very naughty. The trouble we’ve had with things like Twitter,” Fellowes told
The Telegraph during the launch party for Grant’s perfume.

“We had to explain to the cast about the dangers of tweeting as no one realized how interested everybody was in the show. You’re in a bubble when you’re filming.”

“You’re just tweeting these nice things,” Fellowes added, “and you don’t realize there are millions of people worldwide trying to pick up the plot.”

Grant later tweeted a more innocent photo of himself and Julian Fellowes at the launch party.

Fans have scoured the Internet looking for clues about what is going to happen on season 5.

Back in February the "Daily Mail" showed photos of Lady Mary and Lord Gillingham sharing a passionate kiss, hinting that the two of them may end up together in season 5.

I’m a fan of the any publicity is good publicity rule. So I think an innocent tweet or two from cast members won’t hurt.

What do you think - should the cast be allowed to tweet photos of themselves while filming? Let me know.