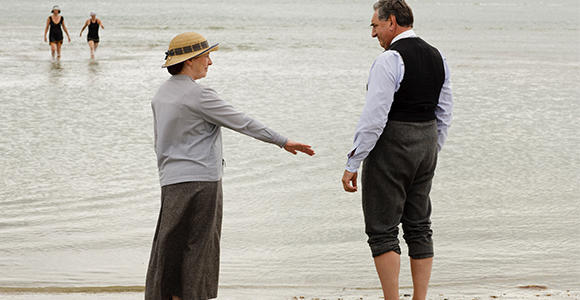 Note the episode is no longer available to watch online.

Downton Abbey ended with a whisper instead of a bang this season. No shocking car crashes. The biggest surprises of this finale were that Carson had the courage to show his bare feet AND take Mrs. Hughes hand to stroll into the water at the beach.

Oops I forgot to preface that with the words SPOILER ALERT.

Of course that ending was not very dramatic. The rest of the finale contained enough eyebrow raising moments though. Scroll down to watch the Downton Abbey season four finale if you don't want me to ruin things for you.

Here is a recap in bullet points.

As I mentioned, the final episode ended softly. Overall the season's over the top storylines left many fans and critics squawking and rolling their eyes. Rape, pregnancy, race relations and a love quadrangle? A bit much Julian Fellowes, don't you think?