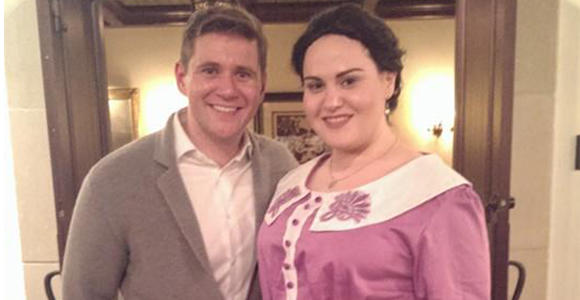 Can you believe that Allen Leech was only supposed to be on two episodes of Downton Abbey? I can’t believe it either! But these are some of the insider tidbits that GPB member and faithful Downton Abbey live chat participant Rachel Buchman learned when she attended the Downton themed weekend with Leech and Jessica Fellowes at the Georgia Sea Island resort.

In Part 2 of this miniseries, the 27 year old personal trainer shares her account of what transpired that weekend. (Read about GPB member Meimi Hartman’s experience in Part 1 of this series.)

Buchman went with her mom thanks to her father who gave her the trip as a Christmas gift.

Desperate for Downton: Share some of the highlights of your weekend.

Buchman: My mother and I drove to Sea Island from Atlanta on Friday morning. It was around a 4 1/2 hour drive, but when we arrived we were quickly shown to a beautiful room overlooking the river and had complimentary refreshments in our room. After exploring the resort a little, we got ready for Friday night's activity, Downton Abbey trivia.

I opted to don my first costume, one of Sybil’s purple day dresses from series 1.

We were seated at round tables, and our dinner companions became our trivia team. As we had an all female team, we were the Downton Dames. There were eight questions and five rounds, with a quizmaster. In between rounds, Jessica Fellowes and Allen Leech shared behind the scenes stories from the set!

Desperate for Downton: What show details did Allen and Jessica reveal to you that we didn’t know about?

Buchman: Maggie Smith didn’t trust Allen to drive the car at all in series one. So whenever he would drive her to the front of Highclere Castle, she’d remind him where to stop even though he was well aware of the mark.

Desperate for Downton What did you learn about Allen Leech that you didn’t know before? Any other show details we didn’t know about?

Buchman: (Here are) full details from the Saturday Q&A:


What You Didn't Know About Allen

Behind the Scenes Tidbits

Desperate for Downton: What was it like to watch “Downton Abbey” with everyone, Allen and Jessica?

Buchman: We all watched Episode 3 together (though I missed watching it with all of you at GPB!). There were lots of oohs and ahhs, and boos at Mr. Green, the valet. Everyone seemed to have sympathy for Anna and Tom. I looked over at Allen Leech during some of the Edna scenes, and he definitely caught me! Edna received quite a few boos as well, and everyone cheered when Mrs. Hughes put her in her place.

After the viewing, there was a professional photographer on hand to take pictures with Allen and Jessica for anyone who wanted it, so there was quite a line! Several ladies dressed as flappers in front of me commented they were Edna-inspired if it meant getting close to Allen, and naturally I had to disapprove.

Finally, there was a fantastic after-party! While I was sipping on a lovely rose champagne, some of the people who worked at Sea Island wanted pictures with me and of me. It was a little odd, but since I'm used to going to fan conventions it felt like just another day in costume. They kept insisting I had the best costume of the night!

One of the organizers of the event even pulled me aside to take several more pictures with Allen Leech, so I wonder where those pictures will end up.

Allen Leech jumped onstage to join the live band! It turns out that he sings and plays guitar, so he joined them in playing and singing Van Morisson's Brown Eyed Girl. I wish I'd recorded the performance, but I have lots of pictures!

Desperate for Downton: What was the Georgia Sea Island Resort like and why was it chosen to host the event.

Buchman: Jessica Fellowes, when asked about how she liked the Sea Island resort, had this to say: “If Downton Abbey was located in the USA, then Sea Island would be the perfect setting.” After exploring the resort and some of the shopping areas nearby, I began to see why.

Sea Island is located in southern Georgia, close to St. Simon’s Island. As for the resort itself, there is only one entrance and exit (which made it ideal for the G8 summit back in 2004!). It’s comprised of three main hotels:The Cloister (where all the Downton events were held) and spa/fitness center, The Lodge, and The Beach Club, the latter of which is ideal if you want to stay on the beach (or have friends or family who plan on spending most of their time at the beach). The Beach Club also had a small ice cream parlor, cafe, gift shop, and a movie theater on site, as well as several heated swimming pools and bar areas.

Desperate for Downton: Did you get a chance to interact personally with Allen and/or Jessica and if so what was that interaction like?

Bachman: The (exclusive) dinner (Saturday) had a maximum of sixty guests, sat at six tables of ten. How the dinner worked was that Allen and Jessica would sit at a different table for each course, which was ideal as there were six courses to be had. The exclusive dinner was 21+ only, due to alcohol pairings with each course.

Allen sat at my table for the Amuse course. He was across the table from me, so unfortunately I didn’t get to talk to him much directly ( several older ladies were taking most of his attention!). But he did talk about his family a little (his brother is a pro golfer), and some of his favorite places in Dublin. He loves Trinity College. He did mention his favorite pub in Dublin, but I unfortunately forgot to write it down! He did mention this pub was where James Joyce could go and have a quiet drink with other Irish writers, so perhaps someone more familiar with Dublin can fill me in.

I managed to ask Allen about the instagram picture where Laura Carmichael is sitting on him, and explained that in an earlier post on tumblr. His answer was that he'd filmed that scene still a bit drunk from the night before, and Laura Carmichael thought it would be amusing to sit on him while he sat down on the sound mats in-between takes. Apparently Michelle Dockery joined in.

Jessica sat at our table for the entree course, and I honestly don’t remember a lot of that. I apologize. She was lovely to chat with, though! What I do remember was asking the difference between American and British fans of Downton, and she insisted American fans are much louder and friendlier, more than happy to come up to you on the street and talk about Downton.

Allen Leech and Jessica Fellowes also mingled quite a bit during the cocktail hour. According to the organizer of the event (we sat next to her at Saturday's dinner) there were to be around 160 guests and nearly everyone made an attempt at period costume! I chatted with Jessica Fellowes and posed for a picture with her, and she was in awe of my costume. She was surprised how accurate it was in construction. I also managed to ask Allen Leech for a picture as well, and he was more than happy to accommodate. He thought my outfit was "brilliant"!

View Rachel's Slideshow of the Weekend: