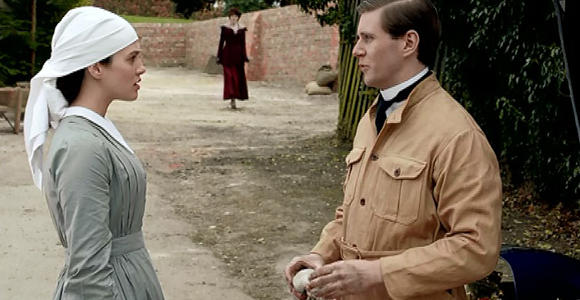 Even Iron Man is in love with Downton Abbey or at least a member of his staff is! If you happened to catch Iron Man 3 this weekend, you noticed that Downton Abbey did a cameo in the film. In the sequel, Happy Hogan, Iron Man’s former bodyguard and now head of security at Stark Industries, is injured in a blast. When Tony Stark (aka Iron Man) visits an unconscious Happy in the hospital, he tells the nurse he’s switching the television channel to PBS because it’s Sunday night. And it’s time for Downton Abbey.

“It’s his favorite show.” Tony says, as a scene from season 2 featuring Branson and Lady Sybil plays on the screen. “He thinks it’s elegant.”

Near the end of the movie, when Hogan regains consciousness in the hospital, he wakes up to see his nurse and more romantic images of Branson and Lady Sybil during happier times. And of course that makes Happy - well happy!

The Downton Abbey placement and the scenes chosen for the movie were carefully selected. Executive producer Gareth Neame tells Entertainment Weekly that Downton producers approached him about adding a clip to the movie as they felt it was appropriate.

When Neame looked at the context of it and felt it was just right.

Jon Favreau who plays Happy Hogan alerted fans to it with this tweet:

Pay attention to what #DowntonAbbey scene Happy is watching in #Ironman3. It was carefully selected.

It was news to Downton cast member Allen Leech who plays Tom Branson. But he was pretty stoked about it:

“@booboomcgoo: some bits where Iron Man's bodyguard is watching Downton Abbey the scenes with Branson & Sybil in the garage.” Ha brilliant x

What do you think of the Downton Abbey placement in Iron Man 3? Maybe the Dowager Countess will appear in the new Captain America movie too!