Three Reasons Why Matthew Crawley Had to Die 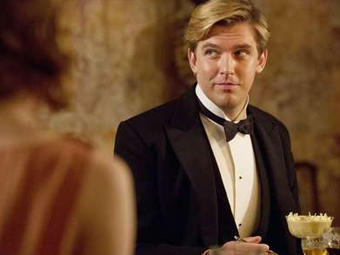 The proverbial cat is out of the bag. Last night we, that is American audiences who watched the season finale of Downton Abbey, found out what British viewers and the Internet already knew: that Matthew Crawley got killed in a car accident. And what a horrible way it happened!

One moment Matthew was happily speeding down the road after having met his newborn son at the hospital. The next his lifeless ,bloody corpse was laying on the grass a few feet from his car after it veered off the road to keep from hitting an oncoming vehicle. Adding an extra stake to our already broken hearts, the episode ended on that upsetting note!

Mary and the upstairs/downstairs family don’t know about Matthew’s death. We’ll have to find out how they take it NEXT season.

So why in the world would the Downton producers kill off such an integral character to the show and why would Dan Stevens (the guy who plays the now deceased Matthew) let them? I did a little research and discovered three legitimate reasons why Matthew had to die. Take a look and tell me whether you agree or not.

1.) Dan Stevens didn’t renew his contract: Rumors were swirling that Stevens wasn’t planning on re-upping his contract for season four. In an interview with Entertainment Weekly producer Gareth Neame explained that the British television system is different than the American one. British agents typically sign three year contracts for their actors. That gives the actors the freedom to move on to the next best thing when the term is up. They do have the option to sign again, but British studios don’t have the same budgets to increase salaries if shows do well. Stevens decided it was time to move on.

2.) They didn’t want to recast Matthew: Could you bear to see Matthew Crawley being played by Hugh Jackman or David Tennant of Dr. Who fame next season? Neither could the producers of Downton. They felt that a better way to deal with Stevens’ exit was to kill off the character. As creator Julian Fellowes reveals in the New York Times, when a servant leaves, the (character ) finds a new job. “With members of the family, once they’re not prepared to come back for any episodes at all, then it means death. Because how believable would it be that Matthew never wanted to see the baby, never wanted to see his wife? And was never seen again at the estate that he was the heir to? So we didn’t have any option, really. I was as sorry as everyone else.”

This of course leaves the door open for Mary to potentially find a new beau next season who could be played by - well Hugh Jackman or David Tennant.

3.) Shooting Downton is grueling: Stevens was offered the option of appearing in a couple of Downton episodes in season four that would give him a proper “send off”. But he declined because of the rough shooting schedule. It would have meant a commute from the states to Dublin and the U.K. That’s why the Christmas episode ended tragically because it was literally Stevens last working days on the series.

Don’t expect season four to pick up with Matthew’s funeral. Fellowes says the new season fast forwards six months later. “We don’t have to do funerals and all that stuff. That’s all in the past by then."

Ah Downton you are so mean! We will have to mourn Matthew on our own, in our own ways. Rest in peace, Mr. Crawley!