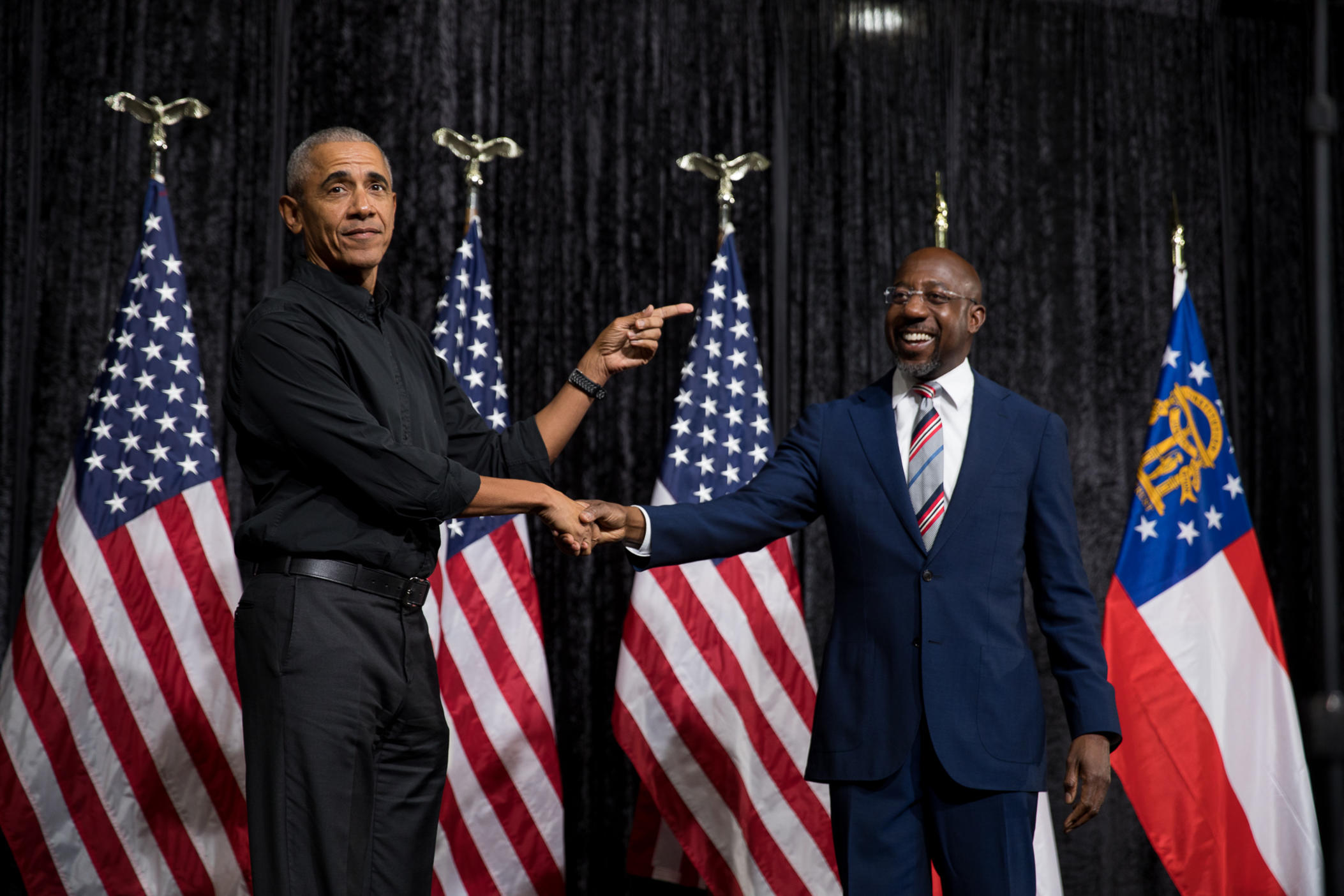 After tens of millions of dollars in TV ads and mailers, texts and calls, canvassing and campaign stops, the U.S. Senate runoff between Sen. Raphael Warnock and Republican Herschel Walker will soon be over.

Whomever Georgia voters elect will serve the state in Washington for the next six years.

Neither candidate managed to clear the 50% threshold needed to win outright in November’s midterm election, with Warnock finishing with 49.4%, nearly 38,000 votes ahead of Walker’s 48.5% and Libertarian Chase Oliver garnering 2.1%.

After Republican lawmakers overhauled the state’s election rules in 2021 to slash the runoff period from nine weeks to just four, both campaigns have engaged in a sprint to get Georgia voters to show up and cast ballots before polls close on Dec. 6.

As of Thursday night, nearly 1.5 million people have voted in the runoff, which is an electorate that is Blacker and more suburban than the same point in the general election, according to absentee data from the state.

At least 32% of early voters so far are Black, according to the absentee voter file, and many of the counties with the most votes so far are concentrated around metro Atlanta.

The abbreviated timeline has seen both campaigns take different approaches to mobilizing voters one more time.

Warnock targeted college-age students, Black voters and moderates who also supported Republican Gov. Brian Kemp in the final stretch. In stark contrast, Walker doubled down on cultural issues salient with the older, whiter base of the Republican party. 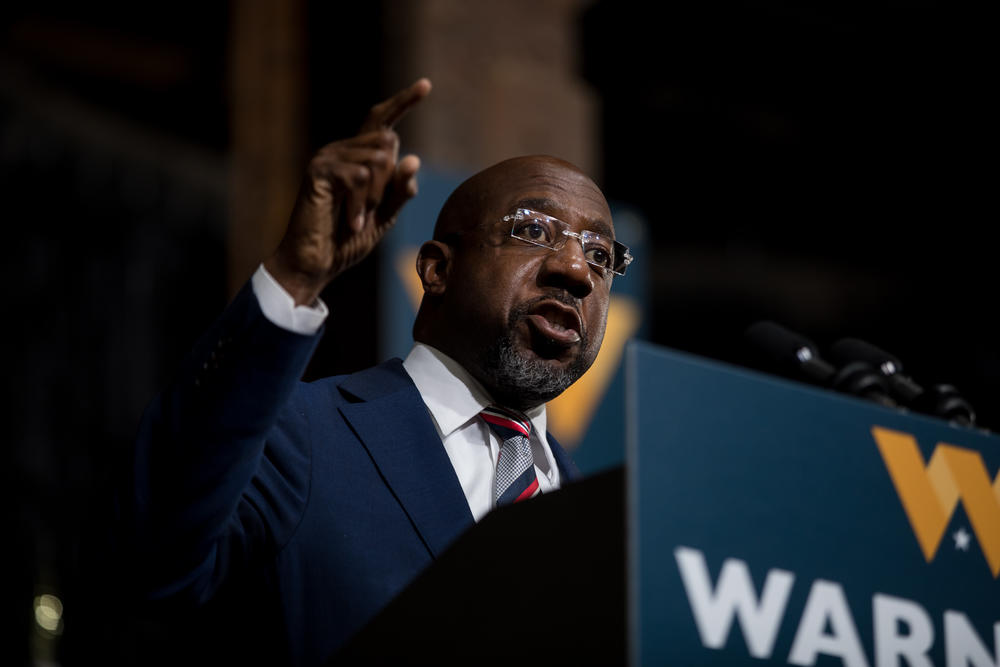 After largely avoiding directly mentioning Walker and the constant controversies surrounding his campaign for much of the general election, Warnock launched his runoff sprint by calling the race a battle of “character and competence.”

“You understand the importance of competence and character,” Warnock said at the base of a mural of late U.S. Rep. John Lewis in Atlanta two days after the midterm. “This is not a race about Democrat and Republican. It’s not a race of right versus the left. Fundamentally, this is a race about right and wrong: Who's right for Georgia, and who's clearly wrong for Georgia.”

The pastor of the historic Ebenezer Baptist Church in Atlanta has pitched himself as willing to work across the aisle on policy that benefits Georgians, touting lowered health care costs for insulin and other legislative victories since winning in a Jan. 2021 special election runoff.

In a midterm election where Democrats struggled mightily with voter turnout — losing the governor’s race and other statewide offices by wide margins — Warnock managed to finish ahead of Walker on the strength of split-ticket voters who supported incumbent Republican Gov. Brian Kemp and opposed Walker’s campaign.

In recent weeks, the Democrat campaigned in deep-red strongholds including Forsyth and Cherokee counties where Walker underperformed Kemp the most.

He also paid visits to the campuses of schools like Morehouse College, Emory University and Georgia State University as part of an effort to mobilize students home over the Thanksgiving holidays and where counties had early voting sites. Those efforts appeared to pay off during the optional weekend of voting after Thanksgiving, where 18- to 24-year-old voters made up a sizable share of votes in mainly Democratic-leaning counties that were open.

Warnock, the Democratic Party of Georgia and the Democratic Senatorial Campaign Committee sued the state of Georgia over Saturday voting after the Secretary of State’s office said state law prevented polls from being open.

“We believe that this is not only wrong, but it is a clear misinterpretation of the law,” Warnock said at a press conference Nov. 15. “Accordingly, we have filed lawsuits to protect the voices of Georgia voters and their ability to utilize their vote on Saturday, Nov. 26.”

A Fulton County judge agreed, an appeals court rejected the secretary of state’s office’s request to stop Saturday voting and the state Supreme Court similarly denied a request from the state and national GOP and the National Republican Senatorial Committee to prevent voting. 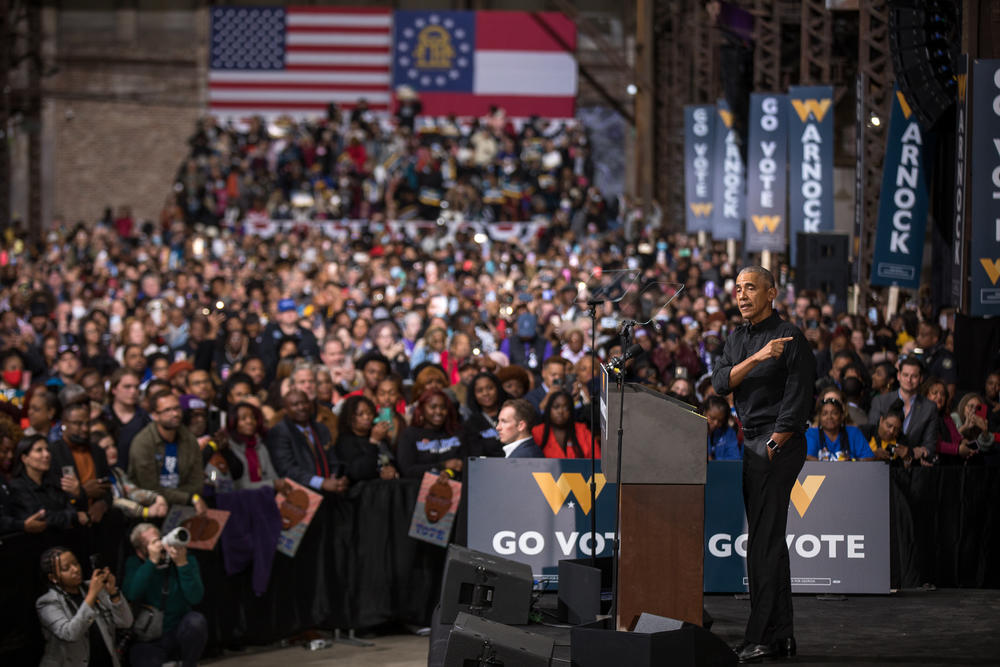 Former President Barack Obama stumps for a second time this election cycle in Atlanta on Dec. 1, 2022, for U.S. Sen. Raphael Warnock ahead of the Dec. 6 runoff next week.

Unlike the 2021 runoffs where Warnock, fellow Democratic Sen. Jon Ossoff and their incumbent Republican opponents were fighting over control of the U.S. Senate chamber, Democrats have already won the 50 seats needed to be in charge for the next two years.

The party held battleground seats in Nevada and Arizona and flipped a seat in Pennsylvania. But the race in Georgia represents different, equally important stakes.

In front of a crowd of about 5,000 people in Atlanta on Thursday night, former President Barack Obama reminded voters their support for Warnock would still have a big impact in Washington.

“Some folks are asking, 'Well, if Democrats are to have control of the Senate, why? Why does this matter? What's the difference between 50 and 51?'” Obama said. ”The answer is a lot.”

“An extra senator gives Democrats more breathing room on important bills,” he explained. “It prevents one person from holding up everything. And it also puts us in a better position a couple of years from now when you've got another election.”

The former president, Democrats’ most effective campaign surrogate on the trail in recent years, pointed to significant partisan battles ahead after Republicans regained control of the House — including efforts to codify federal abortion protections.

Obama also upped his attacks on Walker’s sometimes-nonsensical policy statements and controversial past record since his last visit to Atlanta just before the November midterms.

“Now, if you had forgotten what I said [about Walker] the last time, it's okay, because you just have to wait a minute,” Obama said. “He reminds you every time he opens his mouth.”

He poked fun at Walker’s recent campaign ramblings about vampires and werewolves and claims he beat the former president in a game of basketball — when they have never actually met.

“Listen: this would be funny, if he weren’t running for Senate,” he said.

Above all, Warnock and Obama urged Democrats to show up and vote on the final day of early voting Friday and election day Tuesday because they said that was the only way to ensure the state had meaningful representation for the next six years.

“It's the biggest reason 51 is better than 50,” Obama said. “Because it means Reverend Warnock will keep representing you in Washington.” 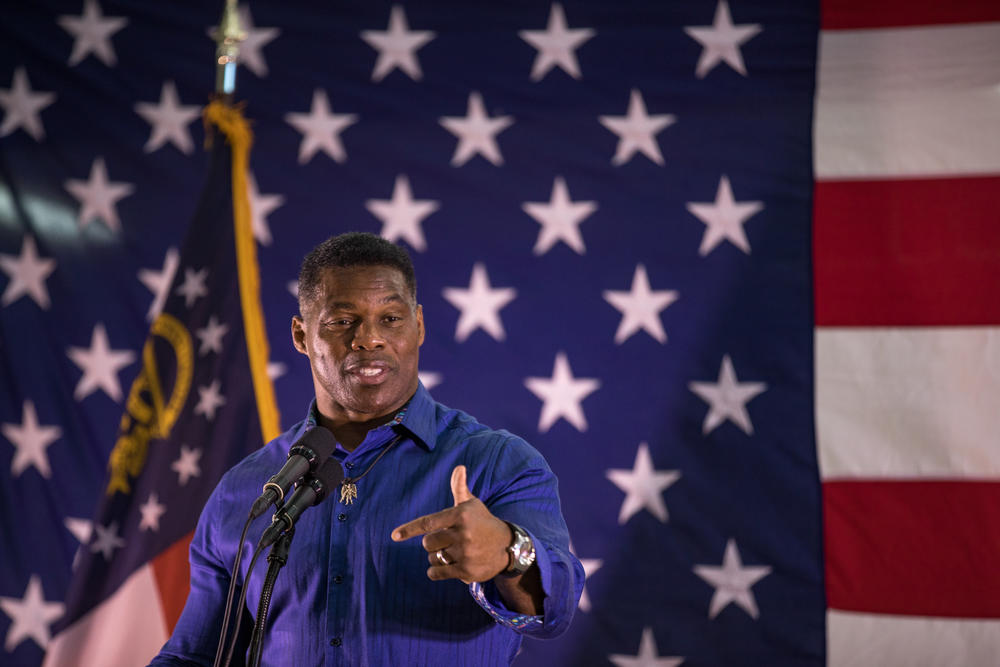 Republican Senate candidate Herschel Walker campaigns in Dalton on Nov. 30, 2022, ahead of the runoff election.

Walker runs on a familiar playbook

Meanwhile, Walker, the former football star, spent his final days ahead of the runoff scouring the state for last-minute votes in Republican strongholds after taking five days off from the trail over the Thanksgiving holiday.

On Wednesday, in the gym of the Mack Gaston Community Center in Dalton, Walker stuck to a similar message: that Warnock and President Joe Biden are bad for Georgia.

“It is time for us to get this thing right,” he told the sparse, mostly white crowd. “Get somebody in Washington that’s got common sense — that’s going to be that leader, that we need to be a leader, and not just a follower.”

Walker won more than 72% of the vote in Whitfield County during the midterm election, while Kemp earned closer to 78%.

Since its inception, Walker’s campaign has aimed to boost enthusiasm among the Republican base by focusing on far-right topics including a crackdown on immigration, attacks on so-called “critical race theory” in schools and anti-transgender policies.

The Republican’s campaign ahead of the midterm election and during the four-week runoff period leaned heavily on anti-transgender rhetoric and featured appearances from former University of Kentucky swimmer Riley Gaines, who competed in the NCAA championships against University of Pennsylvania’s Lia Thomas — a transgender athlete.

“Men shouldn’t be in women’s sports,” Walker told the crowd in North Georgia. “You all don't want Herschel Walker competing against your daughter, do you?”

Walker’s bid for U.S. Senate has been marred by allegations of violence against women — including claims from two women that he forced them to have abortions despite his public stance opposing abortion rights.

Just days before the Dec. 6 runoff, an ex-girlfriend of the football star came forward with accusations of a violent incident with Walker in 2005 driven by his mental health diagnosis of dissociative identity disorder.

Walker has been upfront about his struggles with mental health and denied all allegations made against him. But details that have emerged about his history caused some Republicans to slam the party’s criteria for selecting candidates.

The Republican’s campaign has been dogged by a steady drumbeat of revelations that his backstory and achievements are full of lies and exaggerations, from business exploits to claiming to be in law enforcement to graduating from the University of Georgia.

Even before the runoff, Walker largely avoided discussing policy positions if he were elected, addressing any of the myriad allegations made against him or talking with local media. Walker’s last press conference was more than six weeks ago — his aides opting not to make him available at campaign stops.

But with Georgia’s battleground state status — where elections can go either way depending on turnout — the Trump-backed Republican hopes that the rest of his party’s good fortunes in the midterm can carry over one more time to the runoff.