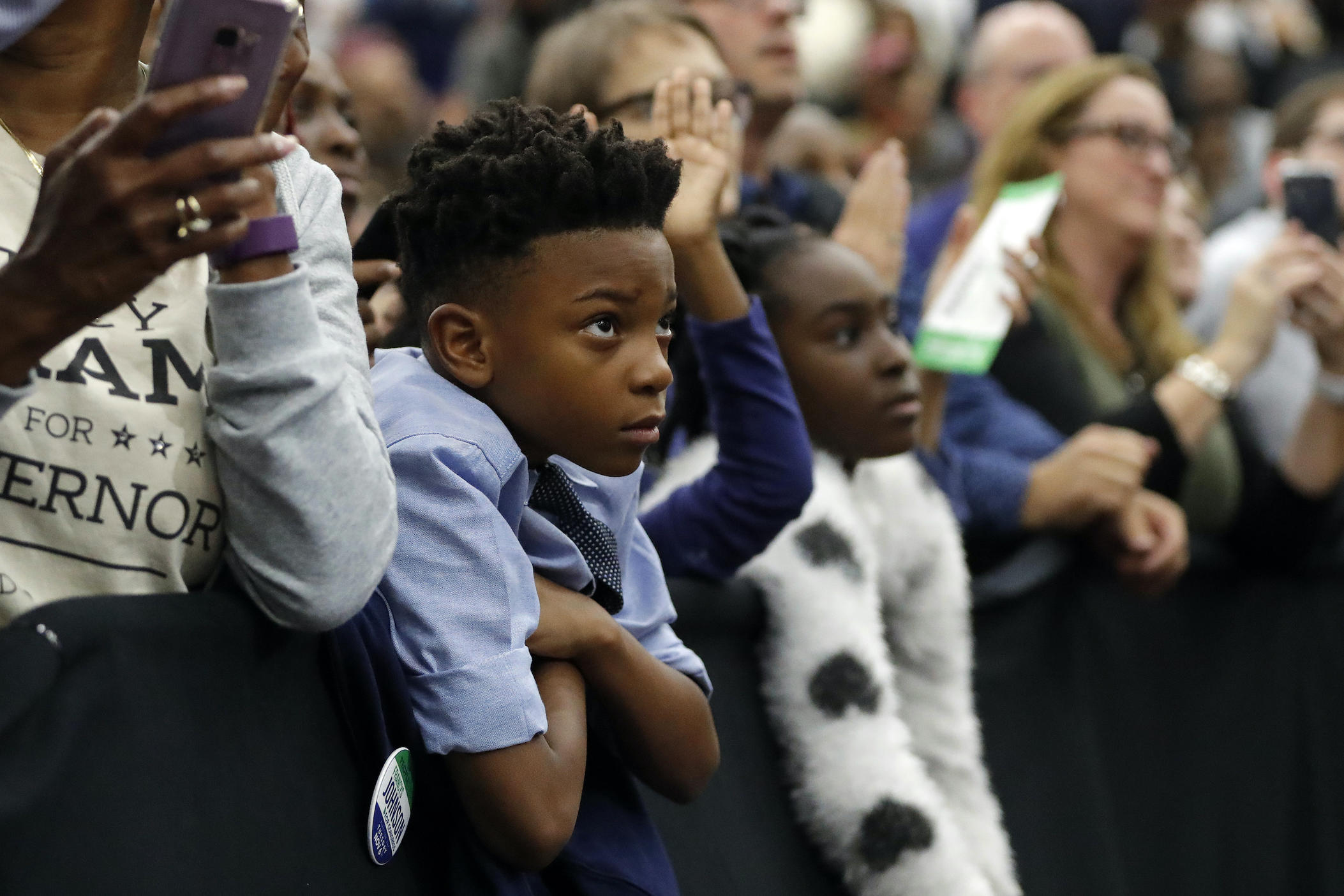 On this episode of "Battleground: Ballot Box," we take a look at voter registration, demographic changes and why Georgia is an electoral battleground.

The most recent time Georgia voted for a Democratic presidential nominee was Bill Clinton in 1992; the most recent Democratic U.S. Senator was Max Cleland, elected in 1996, and the last Democratic governor elected was Roy Barnes in 1998, when only 4.2 million Georgians were on the voter rolls.

Today, that number is over 7.6 million as a recent surge of younger, more diverse voters has changed the equation of politics in the Peach State, culminating in the 2018 governor's race where Democrat Stacey Abrams came within about 50,000 votes of flipping the state. Even suburban Cobb County, home to former Speaker of the House Newt Gingrich, voted for Hillary Clinton in 2016.

A big part of Abrams' campaign strategy was registering and mobilizing these new voters, which was also helped by some state laws enacted by Republicans.

So I sat down with Lauren Groh-Wargo, Abrams’ campaign manager and now CEO of Fair Fight Action, a voting rights group founded by Abrams, to talk more about voter registration laws, trends and why Georgia is one of the closest-watched states ahead of the November election.

Voter registration works a few different ways: there's an online portal, a paper form to fill out or through an interaction with Georgia's Department of Driver Services.

The so-called “motor voter law” has been a huge driver for getting people on the rolls. Georgia led the country in automatic voter registration in 2018, and state officials point out that statistic as evidence of how easy it is to vote in Georgia.

But Groh-Wargo said while improvements have been made, there are some other barriers to the voter registration process that can make it harder for younger, nonwhite Georgians — such as the lack of same-day registration.

“And if you're new to Georgia or new to voting, you may not realize that the voter registration deadline is about a month out from Election Day," she said. "Unlike some other states where you can register the same day that you vote, we don't have that opportunity here in Georgia."

While the deadline to register for the November election was Oct. 5 and has passed, hundreds of thousands of Georgians have registered to vote since the 2018 election.

Groh-Wargo said that another barrier to easy registration until recently was Georgia's exact match law, which held up a voter registration application if the information a voter put in did not exactly match what was on file in a state or federal database.

More specifically, your full name, date of birth, driver’s license number and last four digits of your social security number had to exactly match either the Department of Driver Services database or Social Security Administration database.

So if a voter had a typo, or if the county worker entering your information mistypes it, they would be flagged.

“In fact, I have a hyphenated last name and I got caught up in an exact match and I had trouble registering and had to have a couple interactions with elections officials," she said.

In the 2018 governor’s race, many voters became aware of exact match after a news report found 53,000 names were held up in pending status — meaning their registration was not yet approved — because they did not exactly match those databases, and most of them were Black.

A previous settlement in 2017 meant Georgia no longer canceled applications that did not match up, and a law passed that year gave voters 26 months to correct any issues before that pending application was canceled.

Data obtained from the secretary of state’s office showed that 75,000 applications were actually pending before that election, and about a third of them had made-up addresses, were duplicates or belonged to people not eligible to vote.

Officials did not allow people named Jesus Christ, Magic Mike or Badeye to become registered voters, but most of the remaining pending list were applications submitted by real people on paper forms that had a higher likelihood of error.

After HB 316, an omnibus elections law that authorized Georgia's new voting system, exact match was no more, and voters with flagged applications again become active voters but must show photo ID, like all Georgia voters, before casting a ballot.

Groh-Wargo says voters should always check their registration on the state’s My Voter Page to ensure there are no problems.

"I always check my registration there periodically because I've had challenges, and you can put in your first initial, your last name, your date of birth, your county and you can check your registration status," she said. "It'll have your polling location and show whether or not you've requested an absentee ballot. But that's a good portal to be keeping up with what's going on with both your registration and your voting.”

Georgia is one of many states that have added millions of voters in recent years thanks to better laws and targeted outreach — and Groh-Wargo says this changes the game for political parties heading into the next several elections.

“Georgia, along with Arizona, are two battleground states that this decade are going to become majority people of color," she said. "There's a lot been a lot of literature about how the United States overall is becoming more racially and ethnically diverse ... Georgia is really on the tip of the spear.”

“And we're seeing migration from folks moving to Georgia from around the country, a lot of northerners moving to the south, etc., and also immigration — folks moving here from other countries," Groh-Wargo said. "So the influx of Georgians, both from around the country and around the globe is meaning our population is growing as part of trends that we see across the Southeast, but are particularly acute here in Georgia.”

That’s especially true since 2018, when more than 750,000 new voters have registered since that election. An analysis by the Atlanta Journal-Constitution found that Georgia’s share of voters under 35 has grown by a third since the 2016 presidential election and those 65 and older have dropped.

Groh-Wargo says also there’s a shift in college-educated white voters moving to the Democratic party as well, making Georgia all the more competitive.

But almost as important as who is being added to the rolls is who gets removed.

“We're one of only a few states in the United States where if you do not vote after you become registered, after a couple of cycles you can be removed from the rolls for not voting," she said. "We refer to it as 'use it or lose it.'"

Georgia’s voter list maintenance — some call it a voter purge — is required by federal law to keep voter rolls free of people who are no longer eligible to vote. This mainly applies to people who have died or moved out of state. But there’s also the “use it or lose it” piece.

First, you have to become an inactive voter, which means not voting or having any contact with elections officials for several years. Then, the state sends you a postcard notifying you of your inactive status. If an inactive voter did not vote in the next two general elections, then they would have their voter registration canceled.

The list maintenance can only happen in odd-numbered years too, so in 2019 Republican Secretary of State Brad Raffensperger announced more than 300,000 inactive registrations were about to be canceled, and also published the list of names.

Most of them were people who filed a change of address form or had mail returned as undeliverable. The rest were inactive voters that had no contact with officials.

But Fair Fight and other voting rights groups said those parameters don’t set up a foolproof way to remove registrations, ending up erroneously purging some who still belonged.

“In fact, we sued the state over the winter and engaged a data expert who found about 20,000 voters who had been erroneously purged," she said. "There just isn't a great history of data management of our voter registration rolls, unfortunately, in Georgia. And so we've seen folks purged erroneously in the past and we've been able to get them restored through the years at times.”

More than 4,500 voters reactivated their registrations last December, even getting Democratic presidential candidates to help reach voters after the primary debate in Atlanta.

Not everyone votes in every election, and not everyone should stay on the voter rolls if they aren’t eligible, so Groh-Wargo says keeping things up-to-date is key for voters to not get left out when they do want to cast their ballot.

“Long story short, if you die, you will get removed from the rolls; that is a good thing," she said. "I agree with calling it list maintenance because we do not need a bunch of dead folks bloating our voter rolls."

We’ll note here that the makeup of the canceled voter list mirrors Georgia’s demographic and geographic makeup, but Groh-Wargo says conversations about voting problems or registration issues contributes to a larger issue that affects overall participation for both parties.

"Unfortunately, what happens a lot is that, you know, there's sort of two different fights that go on in politics," she said. "One between the candidates — 'I'm going to vote for Trump or Biden' — and then there's a whole other campaign: 'Am I going to vote or not vote?'”

While she has a preference for who will win come Nov. 3, she says that making everyone aware of Georgia’s voting laws is not a partisan issue.

“All the past year, we've just been really pushing, encouraging people to check their voter registration status because a lot of people haven't really thought about when did they last vote — irregular voters, periodic voters, sporadic voters, super voters," she said.

Whether you’re a super voter or participating for the first time, this election will be one of the most consequential in recent history — so make sure you check your voter registration and the My Voter Page before you cast your ballot.

Please leave us a rating and review on Apple Podcasts. Our editor is Wayne Drash, our intern is Eva Rothenberg, our show is mixed by Jesse Nighswonger and the director of podcasting is Sean Powers. 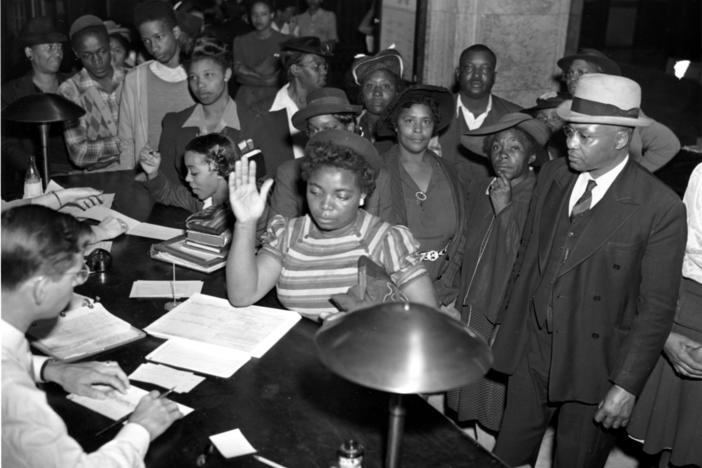