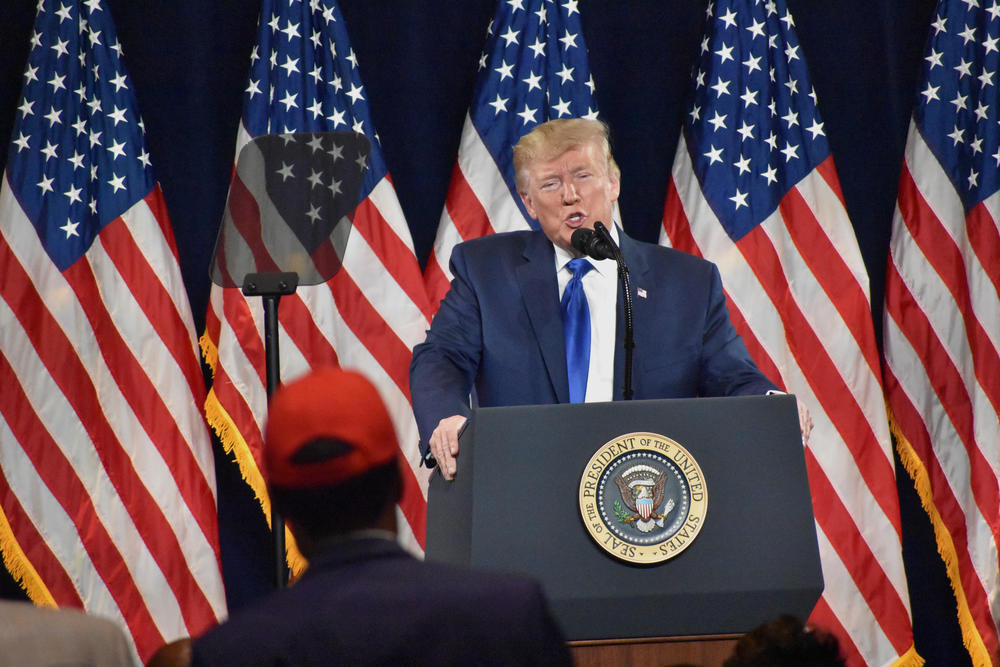 President Donald J. Trump kicked off a new effort to increase support among African American voters in Atlanta Friday, as local Democrats and other groups denounced his policies.

Speaking to a full capacity room of several hundred at the Georgia World Congress Center in downtown Atlanta, Trump launched his "Black Voices For Trump" coalition by arguing his policies were beneficial to black Americans.

The president riffed on some of his favorite topics, like immigration, the economy and even “the deranged hyper-partisan impeachment witch hunt, a sinister effort to nullify the ballots of 63 million patriotic Americans.”

But the main message was a pitch to ditch the Democratic party and vote for him in next year’s election.

“Radical Democrats are waging an all-out assault on the historic values and traditions of the black community,” he told the enthusiastic crowd bedecked in things like colorful custom MAGA hats, patriotic blazers and official coalition t-shirts.

Speaking with a number of attendees before the program began, a common theme was excitement and relief at seeing other black conservatives.

59-year-old Jermane Enoch is from Powder Springs and volunteered with the campaign in 2016. He’s so glad to see so many other black Trump supporters, saying he felt “alone” when Trump was first elected. #gapol pic.twitter.com/kt3r6VB4n8— stephen fowler | georgia politics reporter (@stphnfwlr) November 8, 2019

59-year-old Jermane Enoch came to the event from Powder Springs.

He volunteered with the Trump campaign in 2016 and said he was glad to see so many black Trump supporters, saying he felt “alone” when Trump was first elected.

Jamaal Reynolds came from Chattanooga, Tenn. It was his third time seeing President Trump. He said he felt comfortable being around so many fellow black conservatives, adding that people get too caught up in skin color when it comes to politics.

“We’re past that, America’s past that,“ he said. “America is a place where we all should be able to work together no matter our skin color."

39-year-old Tammi Taylor (center) from Adamsville, AL brought her whole family plus a neighbor to be first in line.

Tami Taylor drove with her husband and three children from Alabama to hear the president speak. She said the most important issue for her is making sure Congress passes legislation to preserve the birthright of African American descendants of slaves.

And Bryson Gray took a bus from North Carolina. Donning an oversized foam “Make America Great Again” hat, he said it was rare and cool to see so many other black conservatives in one place.

Gray was retweeted by the president hours before for something called the #MAGACHALLENGE, where he rapped about his hat and his support for Trump, among other things.

I will be announcing the winners of the #MAGACHALLENGE and inviting them to the @WhiteHouse to meet with me and perform. Good luck! https://t.co/3PYzOvYz17— Donald J. Trump (@realDonaldTrump) November 8, 2019

Atlanta jeweler Bruce LeVell helps run the National Diversity Coalition for the Trump campaign. He said that black voters, especially black men, will be “gamechangers” for the president’s re-election efforts in 2020.

“It’s growing bigger and bigger,” Levell said of support for Trump in the black community. “There are a lot of folks [who like Trump] who are not as courageous as myself.”

But according to Rev. Tim McDonald of First Iconium Baptist Church it’s time for black voters to “dump Trump.” Speaking at a press conference organized by the Democratic Party of Georgia, the pastor said it was a “slap in the face to all Americans” that Trump launched his new initiative in a city steeped in civil rights history.

“To have the audacity to come to the home of Dr. Martin Luther King Jr. to launch a program he thinks is going to cause black people to vote for him is outrageous,” he said.

Several black state lawmakers, including DPG chair state Sen. Nikema Williams (D-Atlanta), also spoke out against Trump and Republican policies in Georgia, including the recent abortion ban that was signed into law and temporarily blocked by the courts.

Meanwhile, outside of the Georgia World Congress Center, about 400 people demonstrated against Trump's visit, including Katherine Kennedy.

The campaign is touting strong economic numbers, including record-low unemployment for African American workers, as one of many reasons black voters should get behind the president in his re-election bid.

It'll be an uphill climb: a recent poll from the Pew Research Center also estimates that about 8% of black voters identify as Republican. 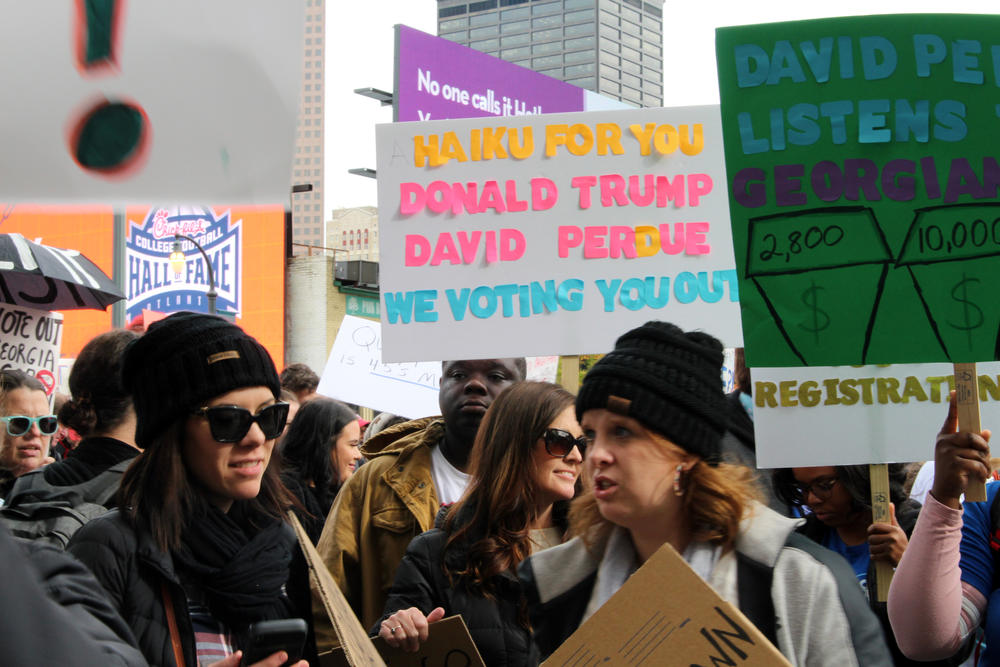 At Least 8,000 Absentee Ballots In Georgia Rejected For Coming In Late

While a record 1.1 million Georgians voted by mail in this year’s June 9 primary, thousands more ballots were not counted because they came in after the...