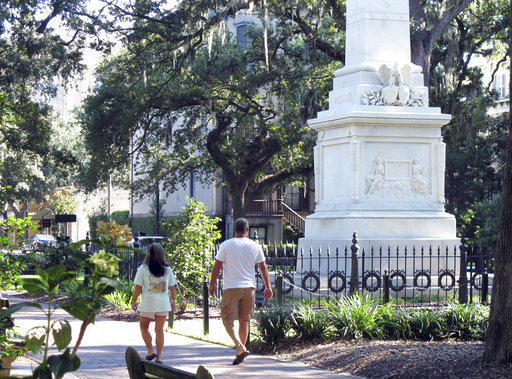 In this Aug. 31, 2018 photo, people stroll through Monterey Square in the historic landmark district of Savannah. Air along the coast earned recent air quality grades of A from the American Lung Association.

A recent study by the American Lung Association shows the air along Georgia's coast and in the mountains is clean and unpolluted. But in the metro Atlanta area, residents should be wary of what they're breathing in.

National Senior Vice President of Public Policy Paul Billings spoke with On Second Thought about what it means that five metro Atlanta counties received failing grades on air quality while the cities of Augusta and Savannah earned A's.

Paul Billings with the American Lung Association speaks with host Virginia Prescott about Georgia's air quality from the metro area to the mountains and coastal counties.

Coastal Georgia has some of the best air in the nation. The same report from the American Lung Association gives the air quality in five metro Atlanta counties a failing grade.

We look at very small particles that are smaller than 2.5 microns and these penetrate deep in the lungs and these come from combustion of coal fired power plants, diesel, wildfires. They also form in the atmosphere from gaseous emissions like sulfur dioxide and nitrogen oxide. Cars and trucks are a big source of nitrogen oxide.

The particles get past the body's natural defenses, penetrate deep in the lungs and they can cause coughing, wheezing, shortness of breath in healthy adults. But for people with asthma or chronic obstructive pulmonary disease they can have an exacerbation and end up in the hospital. And we also know that particles are linked with premature death from heart disease lung disease so that they are also linked to causing lung cancer. So, these are serious pollutants and can cause serious harm.

On why we should care about annual particle pollution in Atlanta

Because these particles are so dangerous and so deadly. So, we don't want to be breathing dirty air and the Clean Air Act promised everyone clean and healthy air to breathe. Yet we're still falling short. And so metro Atlanta is 19th on our nationwide list, which means it's not doing very good.

On receiving a failing grade for air quality

Under the air quality index, we give a weighted average of the number of days that people breathe unhealthy levels of ozone or smog and then we calculate that grade based on a grading scheme that says this has too many days of unhealthy air. And what we know from the monitors in the metro Atlanta area is that far too many Georgians are breathing high ozone on too many days each spring, summer and fall.

It is a powerful respiratory irritant and it can cause what physicians say is like a sunburn in the lung where the cells start to weep, get that redness like you feel with a sunburn. So, it can cause significant harm to the lungs. And it also makes you more susceptible to allergies and infections that can further compromise the health of individuals.

We know that ozone pollution makes people more susceptible to allergens like pollen. We also know that climate change is making both ozone and particulate pollution worse. And we also know it makes the pollen season longer. So, all these things are working together to make people less healthy or to threaten their health. So, it's really important for us to address both the pollution but also people to take steps to safeguard themselves from exposure to pollution or pollen.

On what worsens pollution

Certainly, airports are a big source of precursors for both ozone and particle pollution. So, we see emissions from motor vehicles for people coming to and from the airport. Power plants, particularly coal fired power plants, and you still have plenty of those in the Southeast, produce a lot of pollution that can travel hundreds of miles. Also manufacturing operations, refineries and other small sources like dry cleaners that use chemicals can also contribute to air pollution.

On Augusta getting a good grade

Topography also plays a role, and where the pollution sources are in relation to where the monitors are can also influence the report. So, we are seeing tremendous progress across the countries. We have seen a slight uptick this year in some communities as well.

Because of climate change we're seeing more hot days. Heat is a major factor in creating ozone. You need heat and sunlight to cook those pollutants in the air. We're also seeing the impacts across the country of climate change in drought and dry conditions that lead to wildfire. Wildfires close by and hundreds of miles away are contributing to pollution in our urban areas across the country.

On advocacy for better clean air

We're hard at work pushing the Environmental Protection Agency not to weaken the Clean Air Act. We've seen many attempts in this administration to roll back safeguards of clean up power plants, motor vehicle pollution, oil and gas operations, and so we're fighting very hard to stop those rollbacks. Then we're pushing state and local governments to continue to implement the law and to deploy cleanup strategies to improve the air that we breathe.

On how people can better protect themselves and their families

You can log on to Lung.org/SOTA and see the report and the grades for your county. Also, on a daily basis, you can check the air quality index to determine whether it's a Code Orange day, Code Red day, and if it is a high pollution day, take steps to protect yourself, like not exercising when air pollution levels are high. But also do your part to help reduce pollution by driving less, by consolidating trips or turning off that extra light. Every little bit can help. 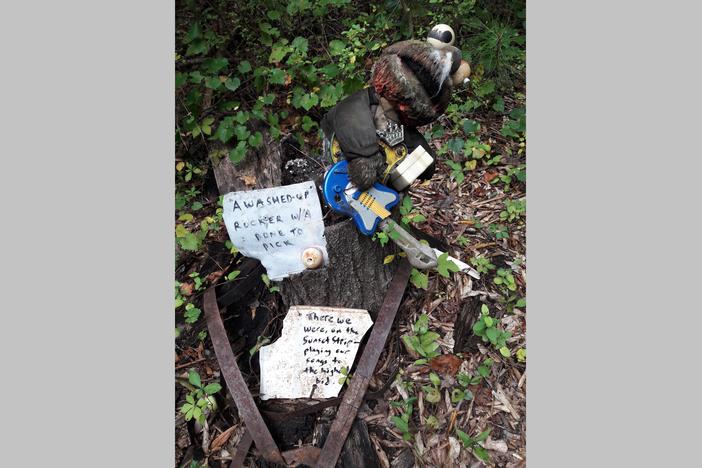 From Trash To Treasure On The Doll's Head Trail

The Doll’s Head Trail is one of Atlanta’s obscure city trails found at Constitution Lakes Park in southeast Atlanta. Along the trail is a collection of...