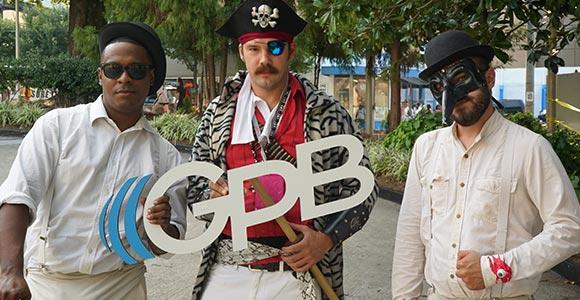 According to Google’s Frightgeist the most popular Halloween costume in Atlanta is a pirate. In Macon, it's Batman and in Savannah droves of people will want to dress up as SpiderGirl.

At Dragon Con, a month ago, we saw our share of pirates, Batmen and SpiderGals. In fact, the convention was a good source of Halloween costume ideas.

If you are a major procrastinator and are still in need of a costume today, let these photos from Dragon Con be a source of inspiration. Of course, some of these costumes are elaborate and took several months for the wearers to make. But some folks simply threw on a bathrobe, put on a pirate hat and called it a day. So there is no reason why you can't whip out a bedsheet or other outfits from your wardrobe and concoct a costume.

But if you are still at the "what should I wear phase", let these costumes from the convention get your creative juices flowing. Here are last minute, Halloween costume ideas from Dragon Con, from photos taken by associate producer and photographer Andrew Riley. View the full photo gallery here.

Be A DC Villain: Poison Ivy, The Joker And Harley Quinn

Be A Jedi, Sith Or Storm Trooper

Be Superheros: Batman And Wonderwoman


Be A Young Indiana Jones - Like Photographer Andrew Riley!


Be Lord Of The Rings Wraiths


Be A Star Trek Cyborg Villain: The Borgs:


Be A Pirate, It’s The Most Popular Costume In Atlanta According To FrightGeist!