Have You Seen the World’s Smallest Movie? 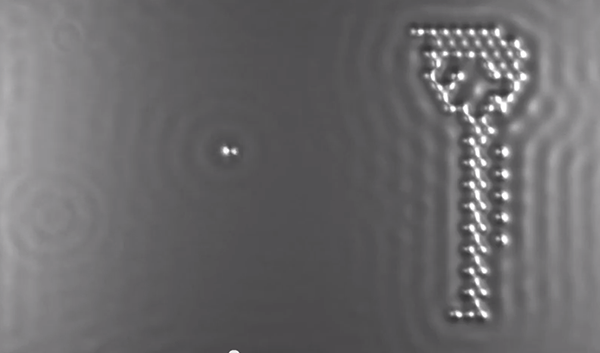 My physical science teacher, the late Mickey Golding, had a way of imprinting scientific knowledge, which is why I can tell you that an atom is (this is how he defined things, by elongating “is” so that we would furiously begin writing down what he says) “a building block for all matter.” While I can't say that I've used that information in my adult life in any real way, others have.

Enter the incredibly creative and obviously brilliant folks at IBM. They investigate and manipulate atoms regularly to “explore the limits of data storage.” For that, we applaud you! It’s this type of work that keeps us from carrying our “portable” phones in shoulder bags. Who remembers those? Show of hands? Zach Morris had his charms, but that massive “cell phone” he had looks so cheesy now, not to mention inconvenient.

By magnifying them 1 million times, IBM has manipulated molecules to create a stop action film. Yes, really. By moving each atom one at a time, taking pictures of those movements, then editing them all together, IBM has made the World’s Smallest Movie. Officially, they hold the Guinness World Record and every thing.

It’s a movie. It tells a story. Ball bounces free, discovers boy, boy plays with the ball, boy loves the ball, we assume they live happily ever after. The only way it could have been improved is if we could see photos of “where are they now” while the credits roll. (Confession: that might be my favorite part of movies, and I am sincerely disappointed when there isn’t something entertaining happening while the credits roll.)

Not ones to simply let us marvel, mouths-agape at the creativity and incredible ability to move atoms into a movie, IBM also made a behind the scenes video. Here’s some perspective from the video: if an atom is enlarged to the size of an orange, then oranges – on scale – would be the size of Earth. Meet the scientists, see the process, and be inspired.