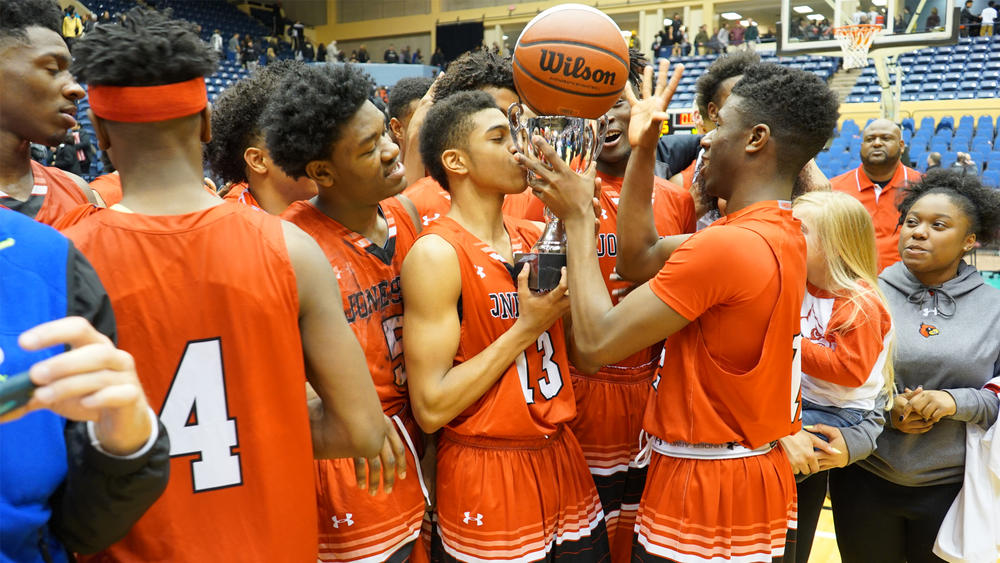 Jonesboro will be seeking its third straight GHSA AAAA Boys State Championship Thursday night when the Cardinals play the Liberty County Panthers at 8:45 p.m. ET on GPB. In the AAAA Girls State Final, it’ll be the Americus-Sumter Panthers meeting the Veterans Lady Warhawks at 7:00 p.m. The 28-4 Cardinals advanced to the state final with a 77-49 rout of Grady in the semi-finals while 27-1 Liberty County reached the state championship game for the first time in school history with an 81-68 semi-final victory over Lithonia. The Panthers had been 0-4 all-time in Final Four action including a loss to Jonesboro in last season’s state semi-finals. Coach Daniel Maelman’s two-time defending state champions are led by M.J. Walker, who is one of the top players in nation. The 6-5, 190-pound Walker is an ESPN 5-star who is rated the number-three player at his position in the Class of 2017, the number-two rated junior in the state of Georgia and the number eight overall player in the nation. Walker has been offered by Auburn and Florida State. He scored 22 in the Cardinals semi-final win over Grady. Coach Julius Stokes’ Panthers are led by Auburn commitment Davion Mitchell. The 6-0, 170 pound ESPN 4-star junior committed to play for Coach Bruce Pearl’s Tigers back in October and is rated the #11 point guard in the nation’s Class of 2017 and the number-four junior in the state of Georgia. Mitchell scored 33 in Liberty County’s semi-final win over Lithonia shooting 9-12 from the floor and hitting five, three-pointers. The Panthers also get big contributions from football star Richard LeCounte who is committed to Coach Kirby Smart’s Georgia Bulldogs. LeCounte is an ESPN 4-star in the Class of 2017 and the number-one rated junior safety in the nation and number-one prospect in the state of Georgia in next season’s senior class. The Girls AAAA State Championship Game will feature one of the top players in the state as Americus-Sumter’s A’tyanna Gaulden leads the Panthers against the Veterans Lady Warhawks. The 5-7 Gaulden has signed with Florida State and is an ESPN 5-star senior, number-five rated point guard and #21 overall prospect in the nation. Gaulden scored 20 points to lead Americus-Sumter to a 51-44 semi-final win over defending state champion Buford, eliminating a Lady Wolves team that had won four state championships in the last seven years. Gaulden has led the Panthers on a remarkable playoff run, leading Americus-Sumter to the state final for the first time ever for a program that had won only three state playoff games before this season. The #1 ranked Panthers are now 30-1 and will face a Veterans team that survived a historic performance to reach the final. Veterans beat Wayne County 28-24 in the lowest scoring semi-final in the state playoffs since girls competition went to 5-on-5 play in 1975. Veterans improved to 27-4 on the season after Coach Nicki Miranda’s team held Wayne County to three, first-half points. Carrington Kee secured the Lady Warhawks victory when she nailed two free throws with 48 seconds to play. It should be a great three days of high school basketball on GPB and it tips-off Thursday. Be sure to join us!