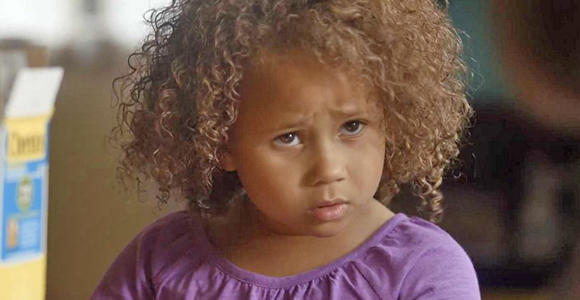 Whoever coined the phrase from the "mouth of babes" - referring to the wisdom of children could not be more spot on. Watch and listen to the wise comments the kids from the Kids React YouTube series gave regarding the “controversial” Cheerios commercial that features an interracial family.

In the ad, a white mother tells her bi-racial daughter about Cheerios' benefits to the heart. The little girl grabs the box and leaves. The last scene shows her sleeping African American father awaking to finds Cheerios piled on his heart. Unfortunately many people thought the video was offensive. It received such a barrage of angry and hateful remarks on YouTube that the comments section was shut down.

When it was first played for the kids and they were asked about it, they commented on the cuteness of the bi-racial girl featured in it. They laughed at the punchline. But once told the ad offended many people because of the mixed race family, the kids were outraged. Here are some of their comments:

“But some people just fall in love like that.”

“It’s just the color of the person’s skin. What matters is whether they're nice or mean.”

“I thought Martin Luther King spoke out against this and fixed this already.”

“People shouldn’t judge each other on the color of their skin or their religion or anything that’s different. You should only judge a person based on their character and personality.”

Wise words indeed. What do you think of the commercial and how the kids reacted to it? Let us know in the comments section.