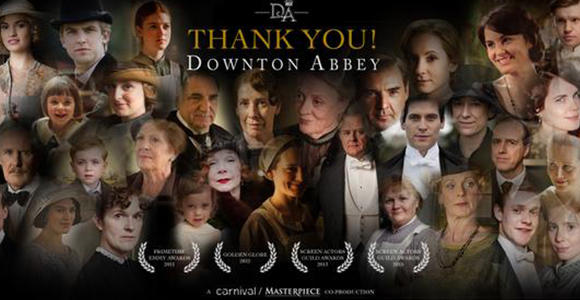 As the saying goes, all good things must come to an end and the show “Downton Abbey” is not immune.

In a tweet sent out today, showrunners announced that season 6 will be the show’s final installment.


”The time has come to announce that Series 6 will be our final visit to #Downton. Thank you for sharing our journey!” were the words quoted on the tweet.

Executive producer Gareth Neame says he knew the show would end after season 6, but he did not want to tell the public while season 5 was still on the air.

Rumors that Downton would be shutting its doors soon hummed in earnest in January when the cast made a big splash at this year’s SAG Awards.

Hollywood insiders noted casting agents were circling the actors like buzzards trying to snap them up for roles.

The time has come to announce that Series 6 will be our final visit to #Downton. Thank you for sharing our journey! pic.twitter.com/s8NWG1w7g9

Her former cousin-in-law, Matthew (a.k.a) Dan Stevens will be headlining the live action version of “Beauty & the Beast”.

Dame Maggie Smith dropped the biggest hint (and then backpeddled through her publicist) that “Downton” wasn’t returning when she said her character will probably die soon given her age.

While its painful to know the words “Welcome to Downton” won’t be uttered for long, at least knowing now that it is ending for sure will give fans enough time to prepare for the show’s farewell and give it the proper send off it deserves.

Remember Mr. Parmuk dying in Lady Mary’s bed? Or Lady Sybil sporting pants? What about Mrs. Patmore figuring out a toaster? Or Mr. Carson and Mrs. Hughes holding hands and walking barefoot on the beach? And one word: O’Brien!

What are your favorite Downton Abbey moments? Sound off in the comments below as we start the long trek to the show’s goodbye (sigh!)