VIDEO: Fabulous Time Had By All At Downton Abbey Season 5 Gala 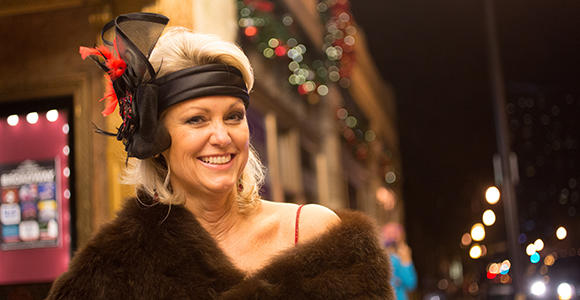 Fans got ready for the fifth season of “Downton Abbey” by attending GPB’s annual gala screening for the first episode. As the video shows, a fabulous time was had by all as the event was held at the Fox Theatre in Atlanta this year.

The elegance of the venue added magic to the night - so did the energy of the fans who turned up in all types of glamorous period costumes (see photos).

Meanwhile the event headliner, “Downton Abbey” historical advisor Alastair Bruce, delighted with a presentation on how he does his job.(See my previous recap on his talk and return for a post this week on the full interview I conducted with him using your fan questions. He provides some intriguing insights on the manners of the period. Incidentally, he peels back the veil on how he ensures the protocols and environment of the time are right in his upcoming special “The Manners of Downton Abbey” which airs January 4 right after the season premiere.)

What did fans think of the first episode of season 5? See for yourselves in the video below. Spoiler Alert! Co-blogger Rachel Buchman reveals some of the scandalous plotlines. But if you watch some of the season trailers, you can pick out the storylines she references.

“Downton Abbey” premieres January 4 at 9 p.m. Don’t forget to join us on this blog for a live chat during the broadcast as we catch up with the Crawleys and Mrs. Hughes and the crew.