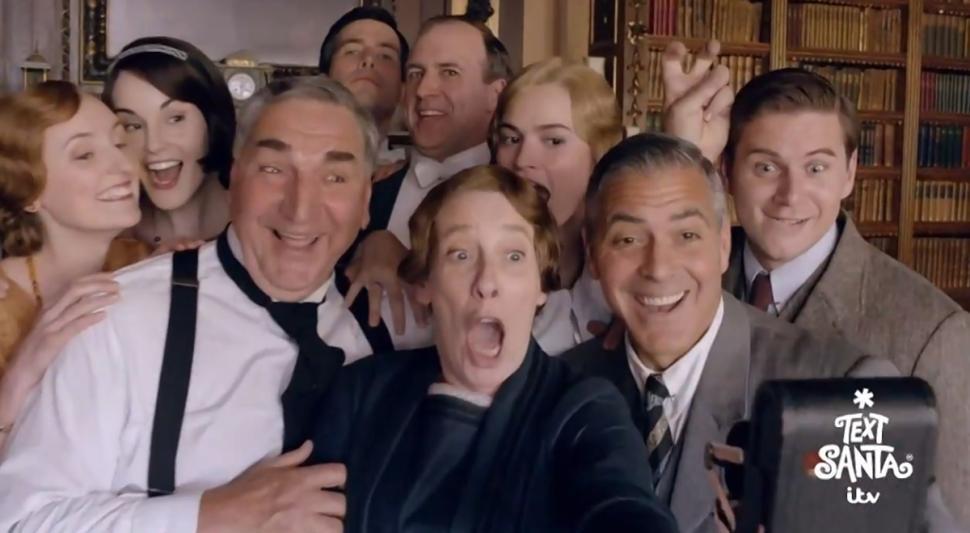 George Clooney has replaced the Earl of Grantham as Lord Hollywood on “Downton Abbey.” Don’t get too excited just yet. It was all in good fun, part of the Text Santa charity skit that aired over the weekend during a telethon. In the spoof, Hugh Bonneville’s Lord Robert ponders what life would be like if he had not been born. An angel, played by “Absolutely Fabulous” star Joanna Lumley, shows him what that reality would look like. And he’s not amused with what he finds. Isobel is having an affair with a “bearded, tradesman” - Mr. Selfridge himself; Mr. Mosely is taking part in a strip poker game with the downstairs staff. And Lady Cora is married to George Oceans Gravity, Marquis of Hollywood, a.k.a Lord Hollywood, played by George Clooney. Clooney is quite the charmer, twirling Cora around in a spontaneous dance and dipping her for a kiss. “She hasn’t let me kiss her like that since,” observes Robert. “Actually she’s never let me kiss her like that!” Clooney then kisses Lady Violet on the hand, causing her to roll off the sofa in a swoon.

The skit goes on to parody Ellen Degeneres' oscar selfie with Mrs. Hughes getting the staff and aristocrats to take a self-portrait with Clooney. At one point Robert sees all of his daughters and wonders how they could have been born if he never existed. The angel escorts him to writer Julian Fellowes to inquire. “You don’t have to worry about that,” says Fellowes. “Nobody cares.” “But if someone eats a grapefruit with the wrong spoon, you go berserk!” wonders Robert. It’s a clever skit. Watch it and let us know what you think.