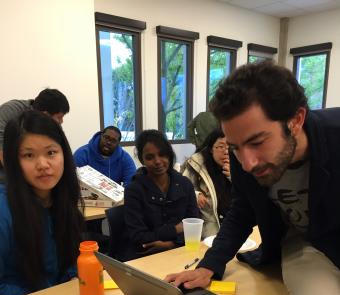 Imagine a public transit system having its own army. Atlanta’s MARTA does. The two-month old MARTA Army is a group of volunteers working to make mass transit more personal.

Founded in September by a group of Georgia Tech graduates and students, several of the group’s leaders grew up in major cities with high-functioning bus and subway systems.

The Army’s first “operation” is called “Adopt-A-Stop.” Volunteers sign up to become MARTA Army “soldiers” who are the boots-on-the-ground working to improve riders’ experience.

At a recent recruitment meeting at Georgia Tech, 26 year-old civil engineering doctoral student Simon Berrebi tells a dozen attendees to pull out their smartphones to locate their bus stops on a map.

Once Berrebi registers the volunteer, co-founder 34 year-old Binh Dam prints and laminates a large bus schedule and route map. It’s the adopter’s job to post the sign on the bus stop pole.

“Adopt-A-Stop is just one way the MARTA Army fulfills its mission – to make riding MARTA as user-friendly as possible,” Dam said.

Both Berrebi and Dam grew up in Paris, but say many in the MARTA Army are native Atlantans who want a better public transit system.

Avhilasha Saroj, a 25 year old transportation engineering student from India, described how she became a soldier in the MARTA Army

“When I was searching as an international student for a place to reside I was really happy to see a bus stop near my home that I thought will give me a lot of accessibility. I want to do something for it,” Saroj said.

Berrebi said that a year ago a MARTA spokesman came to Georgia Tech to ask transportation engineers how to make MARTA “cool.”

“The overwhelming reaction from the crowd was ‘Just leave it up to us.’ If MARTA could let us regular folks do these small things then together we could improve the ridership experience,” Berrebi said.

Once the signs are printed and laminated, Berrebi pulls a rubber hammer from a giant, blue IKEA bag to punch holes to seal with metal grommets.

“They’ve got to be really tight in order to avoid the rain coming through,” Berrebi said.

In response to whether making and posting basic signage should be MARTA’s responsibility, Berrebi said Atlanta’s a region where government institutions are fragmented and nobody has the power to single-handily make transit happen.

“I think people should take it upon themselves to help improve public transportation in their own neighborhood,” Berrebi said.

Improving her neighborhood is why Saroj is adopting her stop.

“It gives me sense of belongingness to be in Atlanta,” Saroj said.

MARTA Army’s next “operation” launches this week. The “MARTA Kudos” program allows MARTA riders to nominate their favorite MARTA employee. Next month, the winner gets a $50 amazon gift card and a medal.

Berrebi and Dam agree that allowing riders to show appreciation for their favorite MARTA bus driver, janitor or public safety officer goes a long way toward improving the system as a whole.