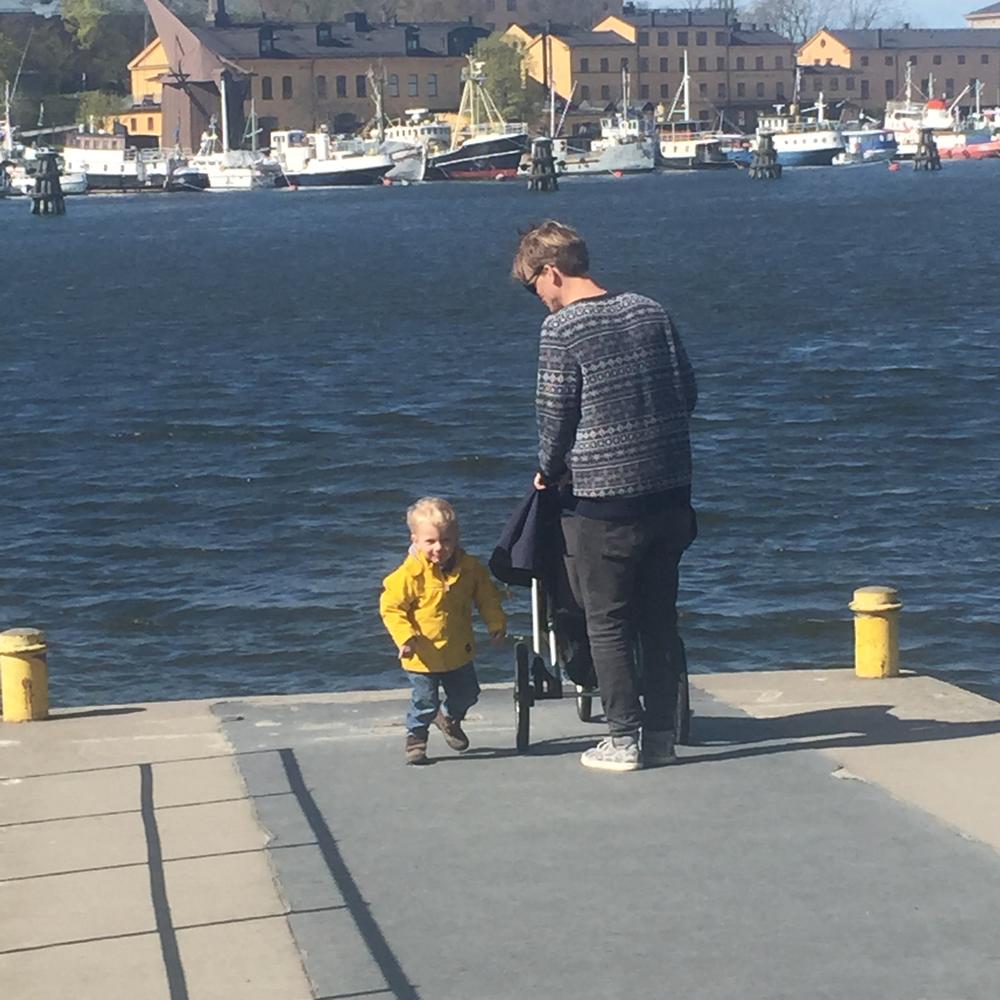 The signs appear here and there as I maneuver my way around the Swedish capital city of Stockholm. On the bus, a professionally-dressed thirty-something rests a protective arm on an infant-laden perambulator while using his free hand to grip the elbow of a squirmish toddler. On the sidewalk, a man in expensive jeans and puffy ski jacket laughs into his cell phone while a tiny baby sleeps soundly in a carrier strapped to his chest. In a museum, a man sitting alone on a bench carefully measures powdered formula into a clear blue plastic baby bottle, then shakes it vigorously as he glances at an infant sleeping in a nearby carriage.

As these family units appear amidst the constant motion of city life, I’m stunned and embarrassed to find myself worrying whether these young children are in competent hands without their mother around. While American men are more involved than ever in child-rearing, Atlanta fathers aren’t typically spotted alone with infants in public.

I’m visiting this country as a Marshall Memorial Fellow of the German Marshall Fund of the United States. My job, so to speak, is to learn about all things European, including nations’ politics, culture, media, and economies. Here in Sweden, six of us Fellows are engaged in a marathon course of meetings with local experts on these topics. But walking down the street is a great way to learn about a place, too.

“A child has a right to its father.” That’s the summary explanation from an elected official illustrating why Sweden provides its male inhabitants 60 days or more of paid paternity leave. To her, it’s a given that men and women who made the baby would share in the joy and sacrifice of caring for it.

Gender roles are a nuanced and fluid dynamic in any society, but data can help paint a broad picture of a people’s attitudes and behaviors when it comes to parenting.

Since 1993, the Family Medical Leave Act, or FMLA, has required employers in the United States to allow a worker to take up to 12 weeks off without losing their job. This covers full-time workers at companies with more than 50 people, and it doesn’t require employers to pay people during their time off.

As President Obama pointed out in his 2015 State of the Union address, 43 million Americans don’t fall under FMLA. When those workers have a child, it’s up to them to figure out how to keep their jobs, maintain a stable household income and care for a newborn. Here’s a recent PBS NewsHour story about family leave in the United States.

Contrast this with Sweden, where parents are entitled to 480 days of paid parental leave. Each parent gets 60 non-transferrable days and then they can choose how to divide the remaining 360 between them. A single parent gets the full 480 days. While mothers continue to take the bulk of the time off, in 2012, Swedish men took about 24 per cent of parental leave.

Add to that Sweden’s affordable and high-quality public daycare and pre-kindergarten programs and you have some very happy parents. Our local guide, a mother of a 14-month old, told us she pays $200 a month in daycare, which is offset by a monthly check every Swedish parent gets of around the same amount until each child’s 18th birthday.

Before you gasp at the disparity (and possibly start packing your bags for a move to Sweden!), keep in mind that Swedes elect to pay as much as 70 percent in taxes for access to this generous social safety net.

Although it can be tempting to place value judgements, the goal of my travels through Europe over the next few weeks is to simply compare and contrast. Europeans do things in all sorts of ways that differ from America’s.

My goal is to ask questions. When asked why Sweden has more women in high elected office, one local politician suggested it could be a result of children growing up watching their fathers and mothers share a more equal burden and benefit of raising a family.

When asked why there are baby changing tables in a men’s public restrooms, our local guide - the one with the 14-month-old - reminded us that fathers change diapers too.