About 1 In 5 Households In U.S. Cities Miss Needed Medical Care During Pandemic 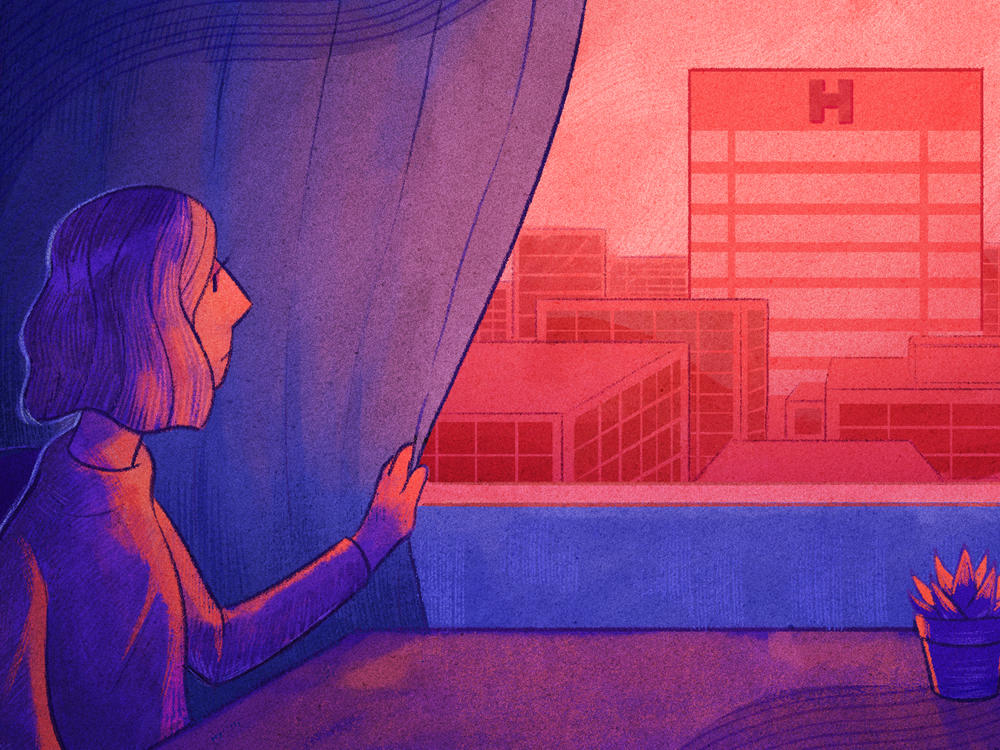 When 28-year-old Katie Kinsey moved from Washington, D.C., to Los Angeles in early March, she didn't expect the pandemic would affect her directly, at least not right away. But that's exactly what happened.

She was still settling in and didn't have a primary care doctor when she got sick with symptoms of what she feared was COVID-19.

Kinsey, who works as a federal consultant in nuclear defense technology, found herself coughing through phone meetings. And then things got worse. Her energy took a dive, and she felt achy all over, "so I was taking naps during the day." She never got a fever but worried about the coronavirus and accelerated her effort to find a doctor.

She called nearly a dozen doctors listed on her insurance card, but all were booked. "Some said they were flooded with patients and couldn't take new patients. Others gave no explanation, and just said they were sorry and could put me on a waiting list." All the waiting lists were two to three months' long.

Eventually Kinsey went to an urgent care clinic, got an X-ray and a diagnosis of severe bronchitis — not COVID-19. Antibiotics helped her get better. But she says she might have avoided "months of illness and lost days of work" had she been able to see a doctor sooner. She was sick for three months.

Kinsey's experience is just one way the pandemic has delayed medical care for Americans in the last several months. A poll of households in the four largest U.S. cities by NPR, the Robert Wood Johnson Foundation and Harvard's T.H. Chan School of Public Health finds roughly one in every five have had at least one member who was unable to get medical care or who has had to delay care for a serious medical problem during the pandemic (ranging from 19% of households in New York City to 27% in Houston).

There were multiple reasons given. Many people reported, like Kinsey, that they could not find a doctor to see them as hospitals around the U.S. delayed or canceled certain medical procedures to focus resources on treating COVID-19.

Other patients avoided critically important medical care because of fears they would catch the coronavirus while in a hospital or medical office.

"One thing we didn't expect from COVID was that we were going to drop 60% of our volume," says Ryan Stanton, an emergency physician in Lexington, Ky., and member of the board of directors of the American College of Emergency Physicians.

"We had people come in with heart attacks after having chest pain for three or four days," Stanton says, "or stroke patients who had significant loss of function for several days, if not a week. And I'd ask them why they hadn't come in, and they would say almost universally they were afraid of COVID."

Stanton found that to be particularly frustrating, because his hospital had made a big effort to communicate with the community to "absolutely come to the hospital for true emergencies."

He describes one patient who had suffered at home for weeks with what ended up being appendicitis. When the patient finally came to the emergency room, Stanton says, a procedure that normally would have been done on an outpatient basis "ended up being a very much more involved surgery with increased risk of complications because of that delay."

The poll finds a majority of households in leading U.S. cities who delayed medical care for serious problems say they had negative health consequences as a result (ranging from 55% in Chicago to 75% in Houston and 63% in Los Angeles).

Dr. Anish Mahajan, chief medical officer of the large public hospital Harbor-UCLA Medical Center in Los Angeles, says the number of emergencies showing up in his hospital have been down during the pandemic, too, because patients have been fearful of catching the coronavirus there. One case that sticks in his mind was a middle aged woman with diabetes who fainted at home.

"Her blood sugar was really high, and she didn't feel well — she was sweating," the doctor recalls. "The family called the ambulance, and the ambulance came, and she said, 'No, no, I don't want to go to the hospital. I'll be fine.' "

By the next day the woman was even sicker. Her family took her to the hospital, where she was rushed to the catheterization lab. There doctors discovered and dissolved a clot in her heart. This was ultimately a successful ending for the patient, Mahajan says, "but you can see how this is very dangerous — to avoid going to the hospital if you have significant symptoms."

"That's yet another signal that something is going on where patients are not coming in for care," Mahajan says. "And those folks who died at home may have died from COVID, but they may also have died from other conditions that they did not come in to get cared for."

Like most hospitals nationwide, Harbor-UCLA canceled elective surgeries to make room for coronavirus patients — at least during the earliest months of the pandemic, and when cases surged.

In NPR's survey of cities, about one-third of households in Chicago and Los Angeles and more than half in Houston and New York with a household member who couldn't get surgeries or elective procedures said it resulted in negative health consequences for that person.

"Back in March and April the estimates were 80[%] to 90% of normal [in terms of screenings for cancer]" at Memorial Sloan Kettering Cancer Center in New York, says Dr. Jeffrey Drebin, who heads surgical oncology there.

"Things like mammograms, colonoscopies, PSA tests were not being done," he says. At the height of the pandemic's spring surge in New York City, Drebin says, he was seeing many more patients than usual who had advanced disease.

"Patients weren't being found at routine colonoscopy," he says. "They were coming in because they had a bleeding tumor or an obstructing tumor and needed to have something done right away."

In June, during patients' information sessions with the hospital, Drebin says patients typically asked if they could wait a few months before getting a cancer screening test.

"In some cases you can, but there are certainly types of cancer that cannot have surgery delayed for a number of months," he explains. With pancreatic or bladder cancer, for example, delaying even a month can dramatically reduce the opportunity for the best treatment or even a cure.

Reductions in cancer screening, Drebin says, are likely to translate to more illness and death down the road. "The estimate," he says, "is that simply the reduction this year in mammography and colonoscopy [procedures] will create 10,000 additional deaths over the next few years."

And even delays in treatment that aren't a matter of life and death can make a big difference in the quality of a life.

For 12-year-old Nicolas Noblitt, who lives in Northridge, Calif., with his parents and two siblings, delays in treatment this year have dramatically reduced his mobility.

Nicolas has cerebral palsy and has relied on a wheelchair most of his life. The muscles in his thighs, hips, calves and even his feet and toes get extremely tight, and that "makes it hard for him to walk even a short distance with a walker," says his mother, Natalie Noblitt. "So, keeping the spasticity under control has been a major project his whole life to keep him comfortable and try to help him gain the most mobility he can have."

Before the pandemic, Nicolas was helped by regular Botox injections, which relaxed his tight muscles and enabled him to wear shoes.

As Nicolas says, "I do have these really cool shoes that have a zipper ... and they really help me — because, one, they're really easy to get on, and two, they're cool shoes." Best of all, he says they stabilize him enough so he can walk with a walker.

"I love those shoes and I think they sort of love me, too, when you think about it," he tells NPR.

Nicolas was due to get a round of Botox injections in early March. But the doctors deemed it an elective procedure and canceled the appointment. That left him to go months without a treatment.

His muscles got so tight that his feet would uncontrollably curl.

Today he is finally back on his Botox regimen and feeling more comfortable — happy to walk with a walker. Even so, says his mom, the lapse in treatment caused setbacks. Nicolas has to work harder now, both in day-to-day activities and in physical therapy. 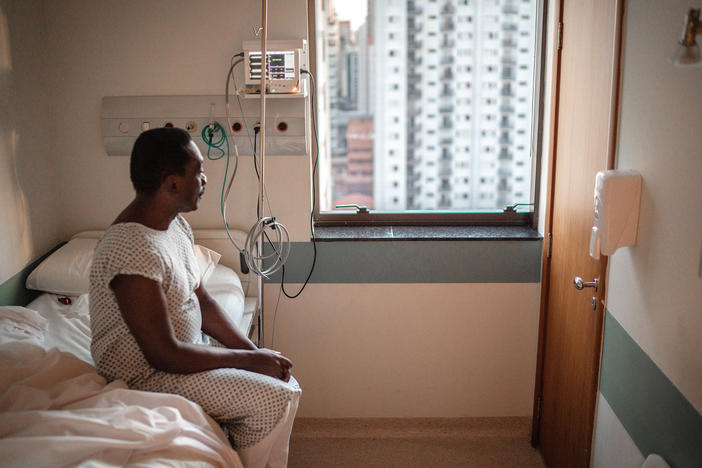 For many cancer patients, daily life can feel full of risky choices involving work, family, friends and money. Nearly every option pits the risks of catching the coronavirus against other downsides. 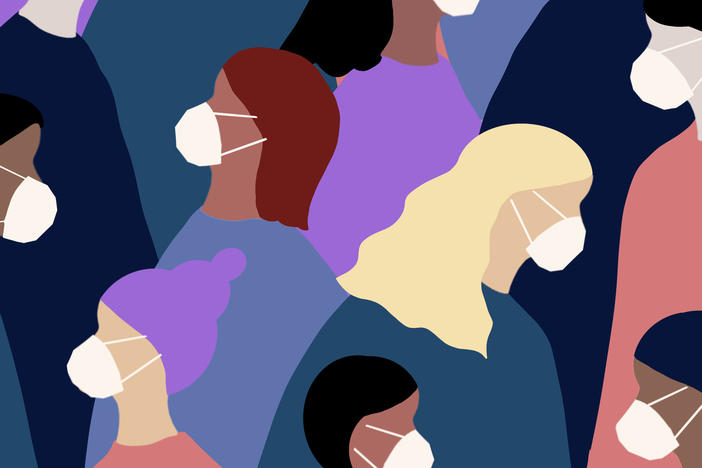 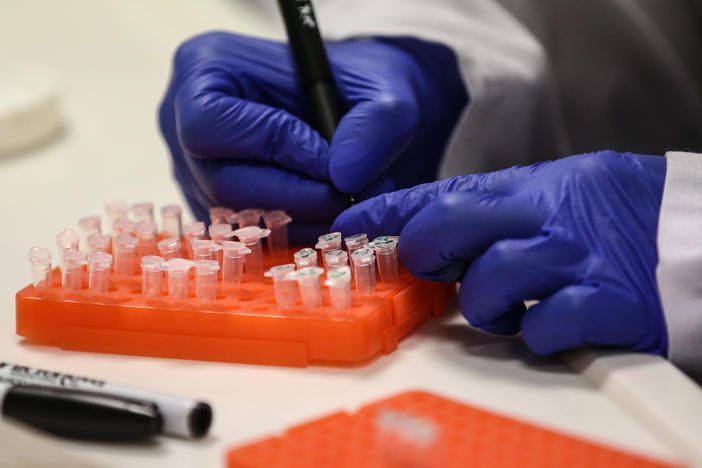 How Can You Tell If A COVID-19 Vaccine Is Working?

Several COVID-19 vaccine candidates are being tested now. But why does it take 30,000 volunteers to know if one is safe and effective? And what does it mean to say a vaccine candidate is working?