This Kenyan family got solar power. High-level climate talks determine who else will

Last month, the Muisyo family turned on the lights for the first time thanks to climate financing from rich countries. But the fund is falling short of its $100 billion goal to help poor countries.

Developing nations have a message at the climate summit in Scotland, a message that has the benefit of being true - the countries with the fewest resources face the greatest climate change threats. To combat the disparity, developed countries promised $100 billion a year to help, but they are not meeting that goal. NPR's Lauren Sommer has more.

MARTIN: At a small house outside of Nairobi, Kenya, there's a big moment happening that's also big for the climate - Winifred Mumbua Muisyo is getting electricity at her home for the first time.

LAUREN SOMMER, BYLINE: An installer from the company d.light is putting a solar panel on her metal roof, which they captured by smartphone. Muisyo is a small-scale farmer who lives there with her three kids. And the solar system comes with more. With a new flock of chicks running around underfoot, they unpack lights, a phone charger and a small TV.

SOMMER: Before this, Muisyo and her family used a kerosene lantern for light.

SOMMER: "It was expensive to buy kerosene," she says, "and it was still too dark." She would hear sounds outside but not be able to see what was going on. Now she'll have an outdoor light and lights inside, too, for her kids to do schoolwork. D.light has installed 1 million of these systems in Kenya, mostly in places where the electric grid doesn't reach. CEO Ned Tozun says that's important for climate change because the energy isn't coming from fossil fuels.

NED TOZUN: There are hundreds of millions of people in the world today that don't have any electricity access, and solar provides a way to get people immediate access to energy and do it in a way that is completely sustainable.

SOMMER: Some of d.light's investment comes from the Green Climate Fund, which gets its money from a coalition of wealthier countries. It's part of a promise that's central to the world's plan to tackle climate change - that by 2020, richer countries will provide $100 billion a year for developing countries to reduce their emissions through things like renewable energy and to prepare for more intense disasters.

SOMMER: Saleemul Huq directs the International Center for Climate Change and Development in Bangladesh. He says the funding was promised 12 years ago, when the inequity of climate change was becoming clear. Developing countries have done little to cause climate change - their emissions are low - but they bear the brunt of the impacts.

HUQ: The case is very simple - it's a moral case. You caused the problem; we are suffering because of you causing the problem. It's your pollution.

SOMMER: But the most that wealthier countries have given was a total of $80 billion in 2019, and Huq says the majority of that is in the form of loans that developing countries have to pay back, which is a burden.

HUQ: For poor people to adapt to floods and cyclones and droughts, they can't repay that. So that doesn't work with loans. That has to come as grants.

SOMMER: Huq says the broken promise for $100 billion has created a huge rift between wealthier and poorer countries, one that's casting a big shadow over the international climate talks in Glasgow.

JOHN KERRY: I know the issue of finance has been much on everybody's minds.

SOMMER: At the summit, Climate Envoy John Kerry says the U.S. plans to quadruple its climate finance to $11 billion per year within a few years. Japan also announced a new pledge, potentially putting the world's goal within reach.

SONAM WANGDI: So far, the progress here is disappointing and, in a way, also frightening.

SOMMER: Sonam Wangdi of Bhutan chairs a coalition of the 46 poorest countries. He says developed nations aren't offering detailed plans for rolling out the funding. The U.S. funding still needs to be approved by Congress.

WANGDI: These figures cannot be verified. They're not that authentic. And we cannot wait any longer. We would like to request governments to stop skirting responsibility.

SOMMER: Even reaching $100 billion may not be enough. A new U.N. report says developing nations need five to 10 times more than is being spent now to prepare for more extreme storms, flooding and droughts. 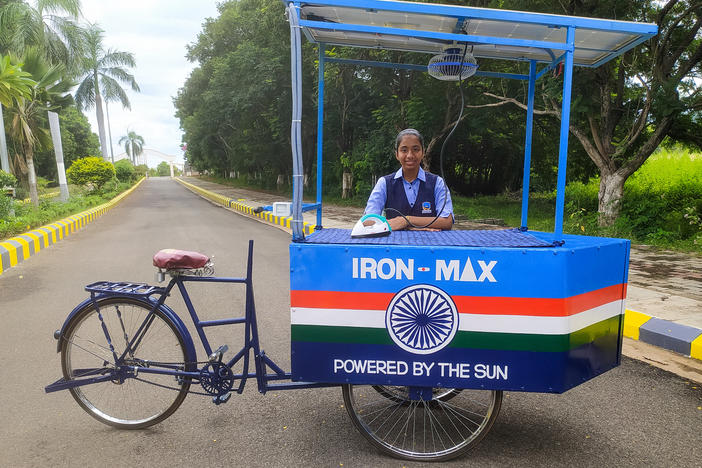 Vinisha Umashankar came up with the idea of solar power instead of charcoal to heat street irons. "Iron-Max" was a finalist for Prince William's Earthshot Prize, and this week, she spoke at COP26. 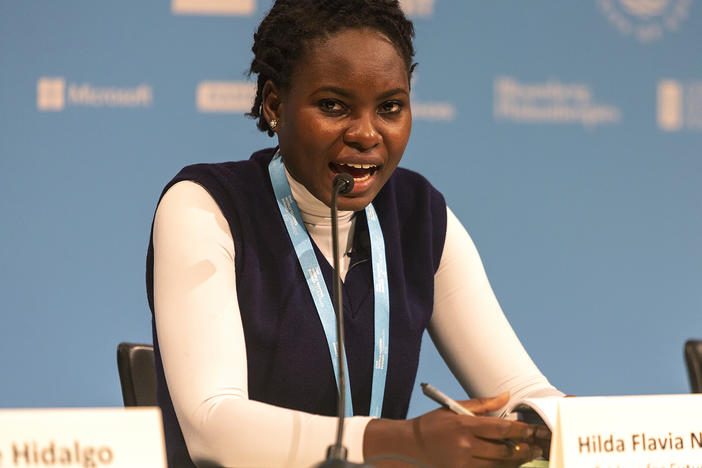 When Hilda Flavia Nakabuye was a girl, a severe storm flooded her family's farm. Now she realizes that climate change was a factor — and she's become an advocate for change. 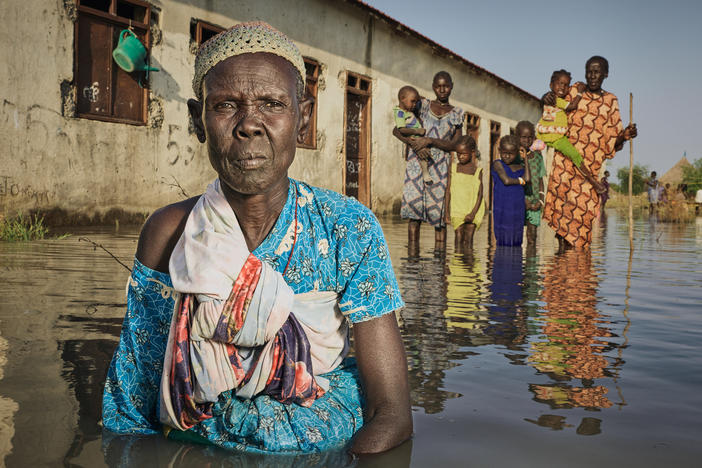 The photo series Unyielding Floods recently won its fifth award this year. It captures the strength and hardship of those affected by flooding of biblical proportions in South Sudan.