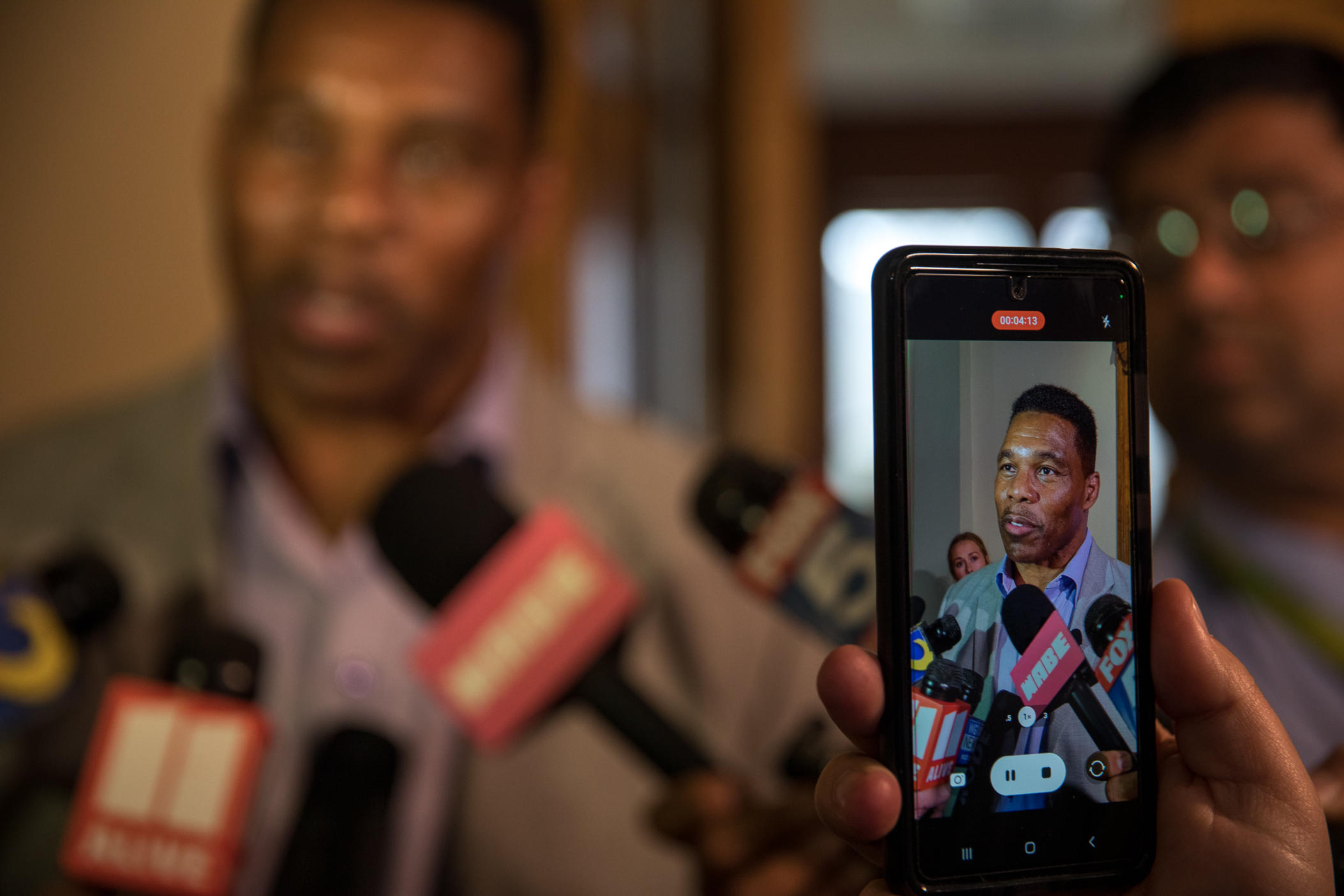 Georgia Republican Senate nominee Herschel Walker finally says he will participate in a debate this fall — though not one of the three meetings Sen. Raphael Warnock accepted months ago.

Walker appeared on Fox News on Tuesday to say he accepted an invitation to debate in Savannah on Oct. 14 in a debate sponsored by Nexstar Media Group, which owns several local TV stations in Georgia, including WSAV in Savannah.

"This debate is gonna be about the people; it's not about some political party, it's not about the press," he said on Sean Hannity's show Tuesday night. "The people need to see the differences between Sen. Warnock and Herschel Walker."

Walker has boasted on the campaign trail and in interviews that he would take on Warnock in debates, but his campaign regularly put out press releases leaving the door open for the Trump-backed candidate to avoid the debate stage, similar to his refusal to debate in the Republican primary.

"Debates only work when the voters are the first priority — not the press or a political party," Walker's spokeswoman Mallory Blount said in a July 21 release."Team Herschel doesn’t care about the old way of doing things and we don’t buy into past political debate traditions. Any debate we agree to must have a fair and equitable format and unbiased moderator."

When asked via email if Walker would be declining the three longstanding debate invitations to face Warnock, Blount did not respond to the question.

After winning the primary on May 25, Warnock's campaign announced the incumbent senator would participate in three general election debates. On June 23, Warnock announced he accepted invitations from a consortium of newsrooms in Macon, the Atlanta Press Club and local TV station WTOC in Savannah.

Georgia Public Broadcasting is a production partner of the Atlanta Press Club debates and a newsroom partner of the Macon debate put on by the Mercer Center for Collaborative Journalism, The Macon Telegraph, 13WMAZ, Atlanta's 11Alive and The Macon Newsroom. The reporter of this story is a board member of the Atlanta Press Club but does not have any involvement in the planning or execution of the debate.

Walker's campaign said in an email that it accepted the Nexstar debate because the "format and the moderators are fair and would allow each candidate equal opportunity to share their message," as well as the debate taking place in front of a large audience.

According to a proposal sent to both campaigns Tuesday, the Nexstar debate would have Fox 5 Atlanta Russ Spencer and WSAV anchor Tina Tyus-Shaw as panelists, be held in a Savannah theater and include questions from Georgia voters and journalists from stations that carry the debate. The topics would be shared with the candidates beforehand, but not the questions.

The Nexstar debate would also give a percentage of the audience tickets to each campaign and would feature a post-debate "spin room" where reporters could interview the two candidates.

A Nexstar-sponsored debate was one of several debate invitations sent to both campaigns over the summer. Warnock's campaign responded that they had already accepted three general election debates, while Walker did not publicly accept any debate until this week. A Nexstar representative called the Walker campaign late last week with a renewed pitch about a debate, and the campaign expressed interest if the debate could be held in Savannah. Discussions led to the new proposal, which was sent Tuesday to both candidates.

In a statement, Warnock's campaign manager Quentin Fulks indicated the proposal for a different Savannah-based debate months after Warnock accepted three well-established statewide debates did not change their plans.

"Herschel Walker has not yet accepted the invitation to participate in our debate," Atlanta Press Club debate coordinator Lauri Strauss said in an email. "However, I have been in touch with his campaign, and we are still discussing some of the details. This is a standard process with many of the debates we host, and we are still hopeful Herschel will participate in our debate."

In Macon, the invitation to Walker and Warnock notes the debate would be moderated by veteran WMAZ anchor Frank Malloy and that questions would be asked by reporters from The Telegraph, GPB, 11Alive and The Macon Newsroom. The organizers of the Macon debate said they have not received any reply or acknowledgement from the Walker campaign.

WTOC in Savannah did not respond to a request for comment about the status and format of their debate.

Walker's acceptance of a separate debate months after Warnock announced three he would attend could create difficult decisions for debate organizers and for members of the public seeking to gain greater insight into the typically reclusive candidate. The Press Club already held a GOP primary debate with Walker represented by an empty lectern earlier this year.

Despite a favorable national environment for Republicans, Walker has lagged in the polls amidst a never-ending stream of controversies about his past, including allegations of domestic violence, overstated personal story and questions about his business record.

The first-time candidate and former Heisman Trophy winner has done relatively little in the way of public events or media availability throughout his campaign beyond interviews with Fox News and other friendly outlets.

The campaign as also been dogged by several high-profile policy gaffes and statements Walker has made, such as the claim that "bad air" floated from China to replace our "good air, saying there are 52 states, musing that a solution to school shootings include "a department that can look at young men that's looking at women that's looking at social media" and responding to a reporter's question about gun laws that “what I like to do is see it and everything and stuff."

An earlier version of this story read:

Walker appeared on Fox News on Monday to say he accepted an invitation to debate in Savannah on Oct. 14 in a debate sponsored by Nexstar Media Group, which owns several local TV stations in Georgia, including WSAV in Savannah.

Walker appeared on the network on Tuesday, not Monday. GPB News regrets the error. 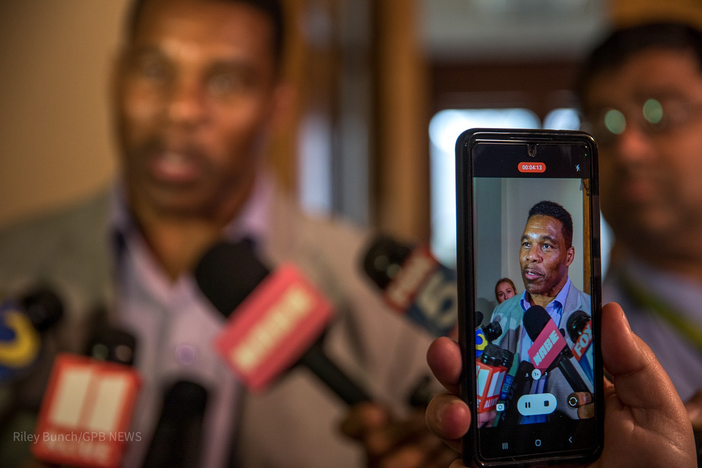 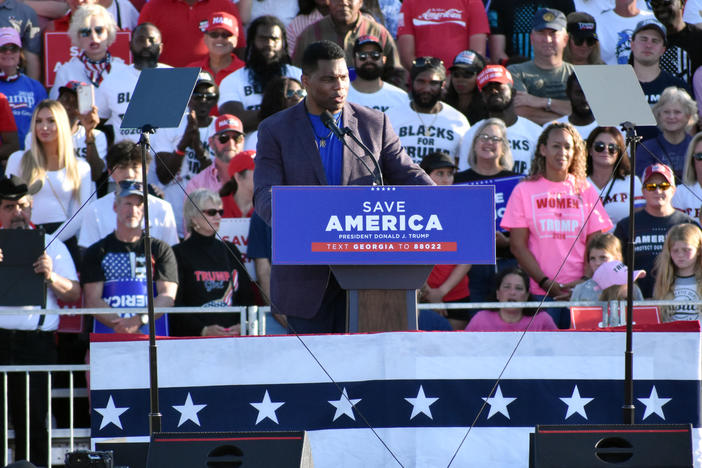