Why fixing Georgia's deadliest roads for pedestrians remains out of reach 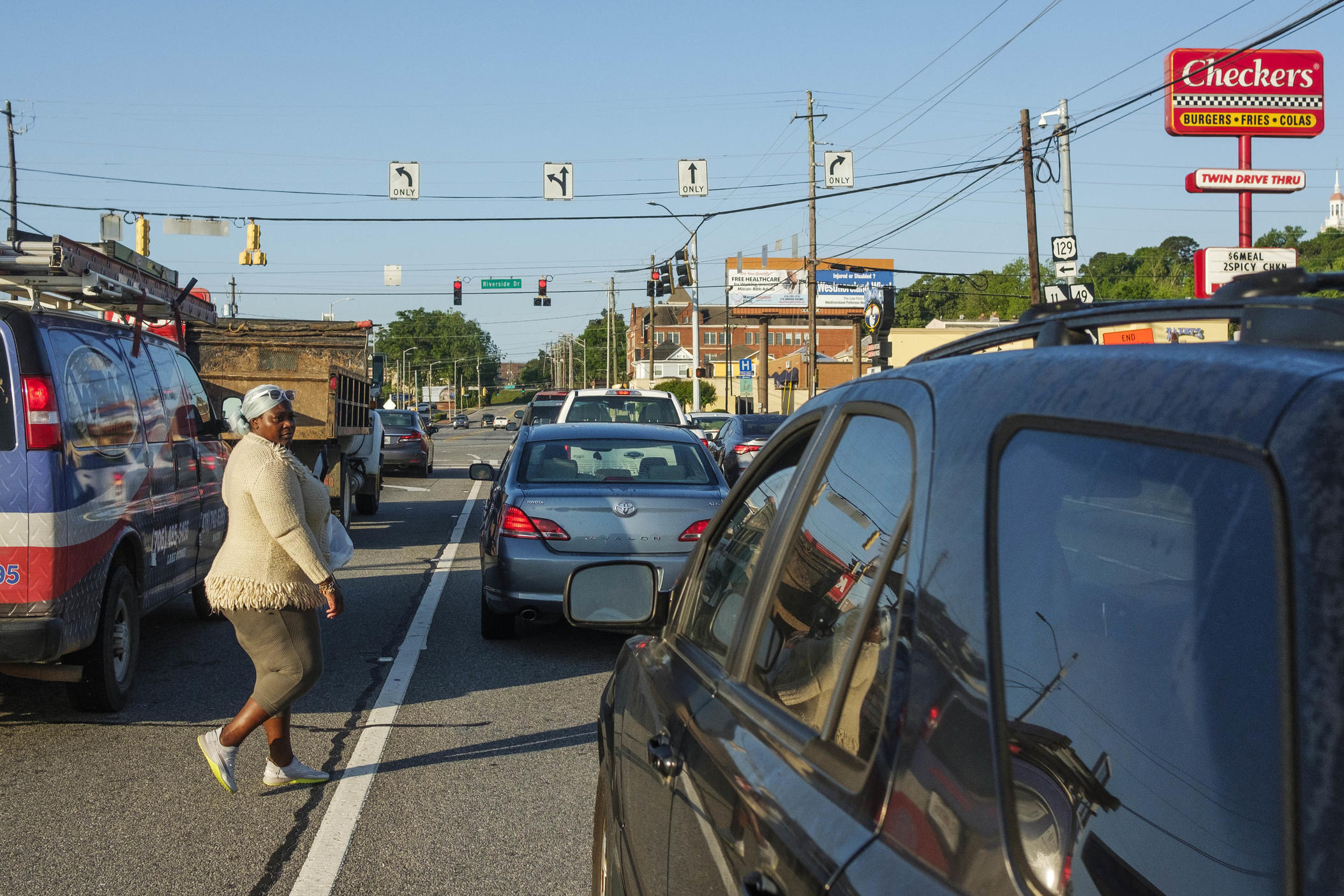 Caption
Mika Shills crosses Spring Street in Macon with the red light going her way by about 20 yards from the crosswalk a few hours after another pedestrian was hit and killed near the same spot. Shills is careful about crossing Macon roadways on foot but says nowhere is really safe to do it. "They'll speed up and try to hit you out here," she said.

A narrow trail of matted grass that stretches for a mile or so through knee-high weeds along the deadliest corridor here for pedestrians marks the route Thomas Bemke treads twice each week to buy groceries.

The 60-year-old U.S. Navy veteran from Warner Robins said he moved to Twin Pines apartments on Gray Highway a couple of years ago with help from the U.S. Department of Veterans Affairs in Dublin. He doesn’t have a car.

“They ought to cut the grass,” Bemke said as he cautiously stepped around an eroded pit fall in his path. “I just don’t understand.”

Traffic moves fast along the six-lane state highway and there are lots of semi trucks, Bemke said, “so you have to be careful.”

Gray Highway has long been identified as a hotspot for pedestrian deaths in Macon but little if anything has been done to make it or other corridors with high pedestrian fatalities safer.

There were six pedestrian deaths in Bibb County in 2015 when the Macon-Bibb County Board of Health identified pedestrian fatalities as a critical public health issue and the county created the Pedestrian Safety Review Board.

Even so, the number of people who’ve been killed on foot here has remained high. There were 17 pedestrian deaths in 2021 and in the past month there have been three pedestrians killed. 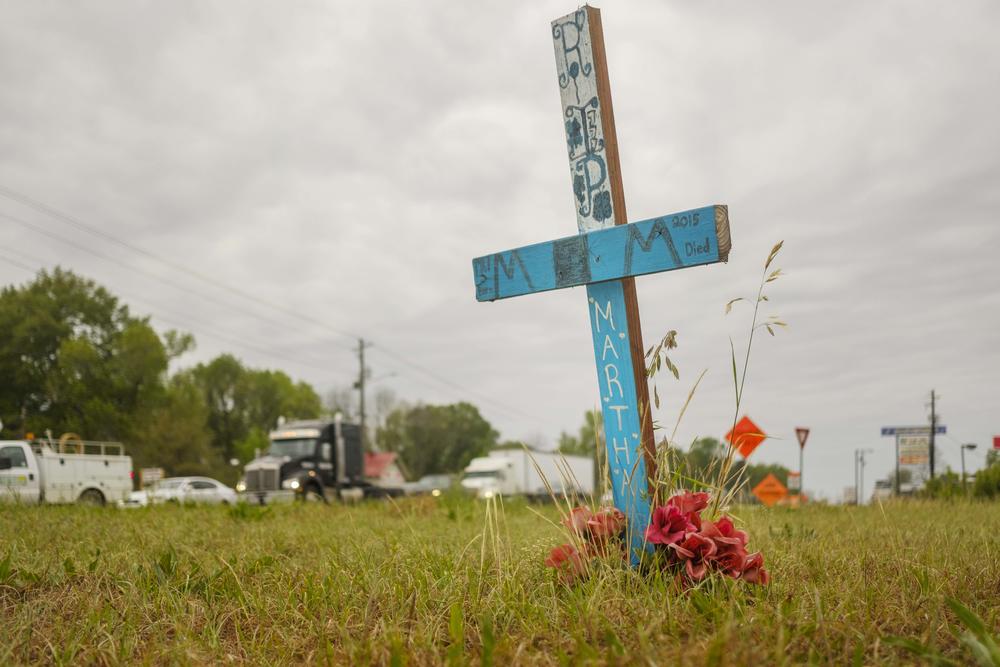 A roadside memorial for a Martha Ard, killed in 2015 at this spot in Macon where three major arterial roads funnel into US 247 South. Four pedestrians have been killed near the spot since 2006.

At its inception, the Pedestrian Safety Review Board was tasked with reviewing  each pedestrian death, determining its cause and preparing recommendations for measures that ensure future safety for foot traffic in those areas, according to county ordinance.

The board meets monthly and has made recommendations for improvements to county roads such as lowering the speed limit in high-pedestrian traffic areas and installing traffic calming devices. Even so, the deadliest roads in Macon are ones the county has no authority to improve.

The need to identify hotspots where people have been killed on roads here is a concern that has been raised repeatedly by board members at meetings since October.

The sheriff’s office and the coroner’s office — county agencies that keep records and reports related to traffic deaths here and have appointments to the board — are rarely present at the monthly meetings, according to meeting minutes over the past two years.

Bibb County Coroner Leon Jones attended meetings in 2016 but said he stopped coming because “it just wasn’t headed in the direction I thought it should be headed.”

Jones said safety issues were discussed but rarely acted upon.

“These are areas that I was concerned about,” Jones said. “I expressed my concern and it seemed like wasn’t nothing done about it or they didn’t have an aggressive approach in doing it.” 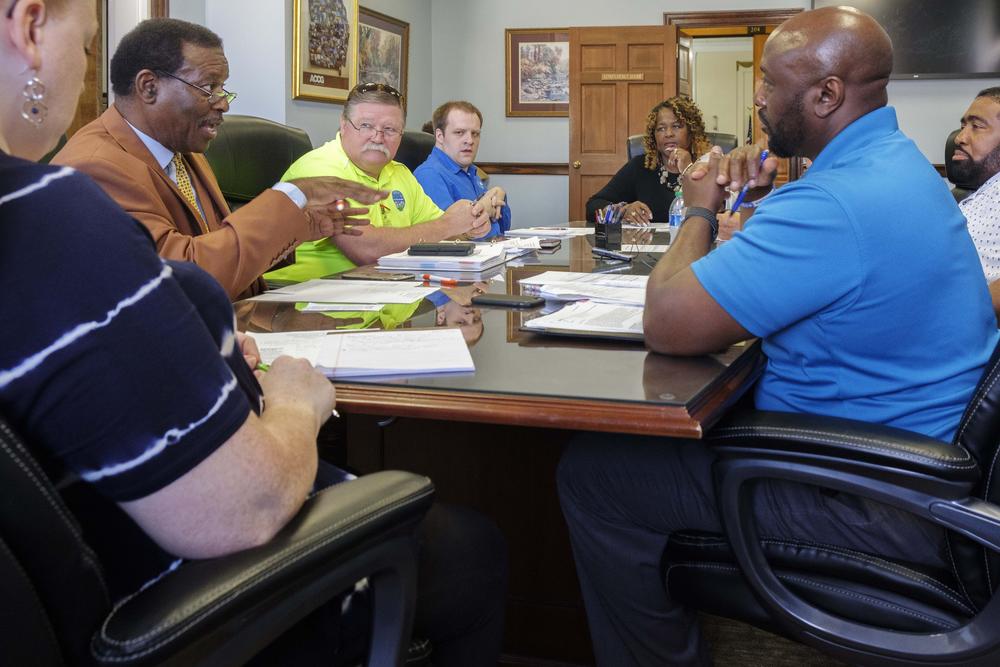 The Macon-Bibb County Pedestrian Safety Review Board in their May 17, 2022 meeting.

Despite its original name and duties in county ordinance, the board does not review pedestrian deaths. Most of its resources are devoted to advocating for safety through educational campaigns and promoting pedestrian awareness through events.

As the county was on track for its deadliest year on record for pedestrian fatalities in late 2021, none of the PSRB members who attended the final meetings of the year could even say with certainty how many such deaths there had been.

GETTING THE STATE’S ATTENTION

The deadliest roads in Macon are ones the county has the least control to improve.

“We don't have any control over state routes,” Macon-Bibb County Traffic Engineer Nigel Floyd said. “We can only ask and hope that they would look at it and help us in trying to do it.”

One of the first steps municipalities can take to get the Georgia Department of Transportation’s attention to mitigate a dangerous state road is to conduct a Road Safety Audit. The audits, often done in tandem with GDOT, result in a formal report that lays out safety issues and how to improve them.

In October 2016, the Macon-Bibb Planning & Zoning Commission and the county engineering department led a Road Safety Audit of Gray Highway from Shurling Drive to the Jones County line. The audit was prompted by four pedestrian deaths and two serious injuries. The final report notes there are “hundreds of residential housing units with no or limited access to vehicles” along the corridor and virtually “no pedestrian facilities.”

Pictures of the beaten path Bemke walks to the Dollar Tree are referred to in the report as “pedestrian desire lines” which are “clear evidence of pedestrian use.” 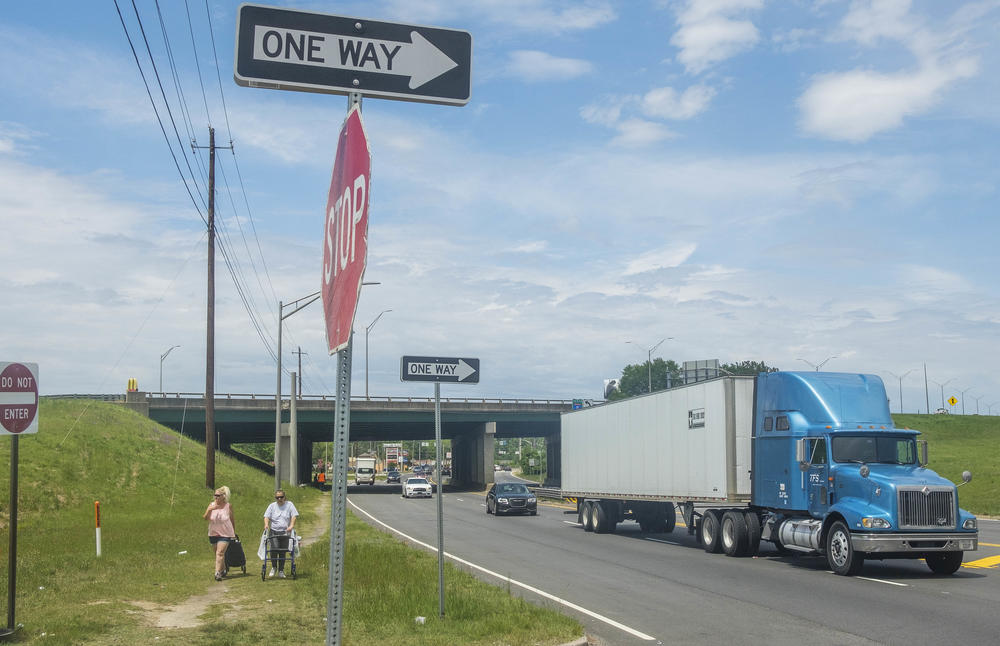 Two people on foot, one with a walker, negotiate the dirt path, or "desire line", on Pio Nono Avenue in Macon after it passes under Interstate 75. The spot is one of the most deadly for pedestrians in Macon with five people killed within about a quarter mile of it since 2006.

In the six years since the road audit was completed, none of the issues identified have been addressed and three more pedestrians have been killed on that stretch of highway.

GDOT’s traffic operations said recently the 2016 road audit was not on its radar but had recently resurfaced after receiving questions about it from reporters.

Floyd said the challenge is less about how to fix the roads over which the county has no control and more about “just dealing with the bureaucracy” to get GDOT to prioritize safety improvements.

Upon learning the audit wasn’t on GDOT’s radar, Macon-Bibb County Commissioner Elaine Lucas, who spearheaded the creation of PSRB, said she “can’t understand why or how in the world that could be.”

“People have talked about the difficulty in working with GDOT and how they have their own plans for how they do things,” Lucas said. “That’s why we have initiated that increased contact with our legislators.”

Lucas added there has not been a PSRB meeting during which safety concerns on Gray Highway weren't discussed.

GDOT said it accepts two Road Safety Audits each year from each of its seven districts. Some of the road audits are initiated by GDOT while others are initiated and conducted by municipalities with GDOT support.

In Bibb County, road audits initiated by GDOT have gotten results faster. For example, improvements have already been made as the result of the state-led audit of Eisenhower Parkway in 2016, a few months before the county-led audit of Gray Highway.

The Eisenhower audit resulted in the installation of a flashing pedestrian crosswalk at C Street and Eisenhower Parkway among other safety improvements.

Macon-Bibb County committed in 2016 to implementing a strategy from the Institute of Transportation Engineers called Vision Zero. The goal is to eliminate fatalities and serious injuries on roads here by 2040.

Bob Dallas, a lawyer from Dunwoody who was appointed by former Gov. Sonny Perdue as director of the Governor’s Office of Highway Safety 2003-11, was hired by the county in 2019 to be its Vision Zero consultant. Dallas was paid $80 per hour to help the county through the process for adopting a Vision Zero Action Plan, according to financial records obtained from the health department through the open records act.

Dallas charged between $400-$800 for each meeting he attended and was paid by the minute for participating in phone calls with staff from KLS Engineering, a Virginia-based federal highway consultant group, to create the Vision Zero Action Plan adopted by the county in late 2020. 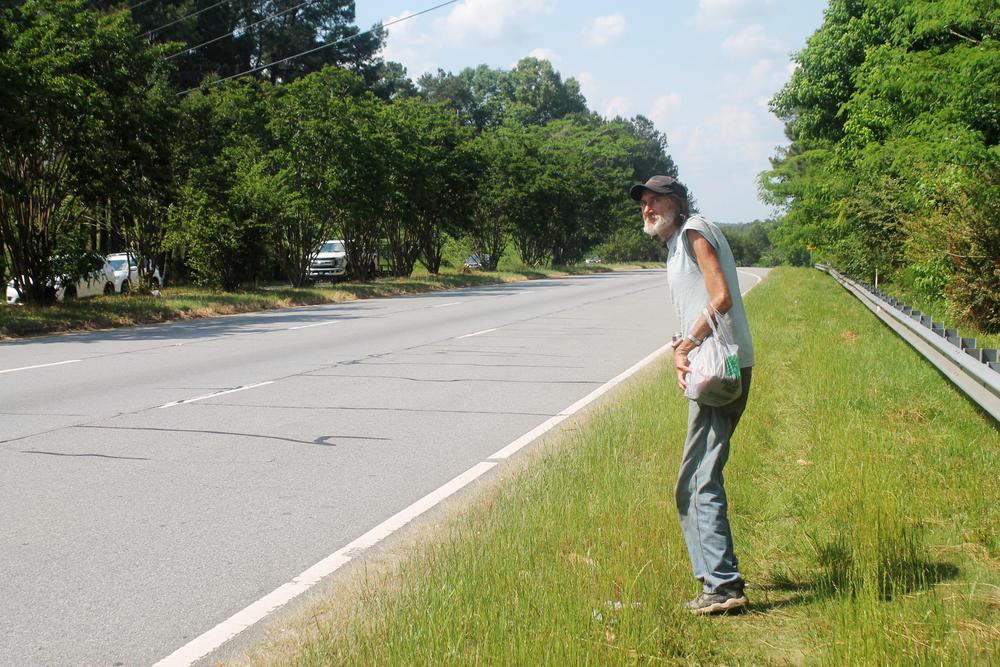 Thomas Bemke, 60, carries his shopping as he prepares to cross six lanes of Gray Highway in Macon recently.

A short-term goal identified in the action plan was to create a full-time county position to oversee and develop strategies to improve traffic safety. The employee also would be tasked with keeping the county’s road safety issues on the radars of GDOT and transportation policy makers.

Ideally, Floyd said, the person hired in that role “would be a mouthpiece for the county that, you know, can actually go up to GDOT and, you know, just deal with the bureaucracy up there.”

However, two years have passed and PSRB has not identified a source of funding for the position. Assistant County Attorney Adrianna Beavers said the board has come up with a tentative job description and is working with GDOT on terms of an official agreement. It is unclear what the timeline is for when the county might be in a position to fill the job.

Gregory Brown, chairman of PSRB and assistant planning director for Macon-Bibb Planning & Zoning Commission, said the county attorney’s office is working on a memorandum of understanding agreement with GDOT that will include those details. 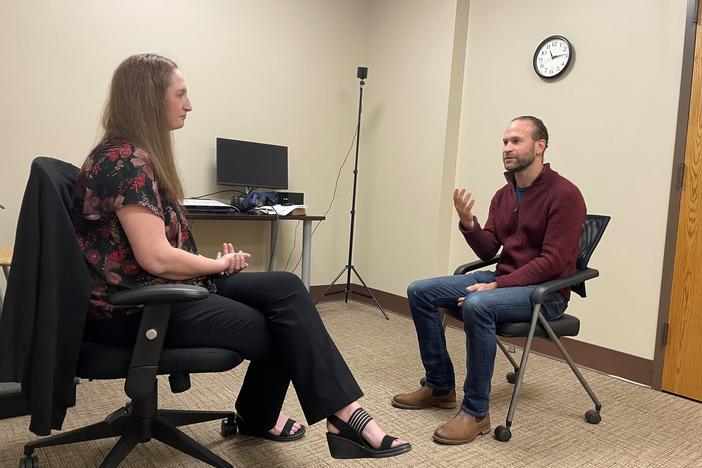 Encouraging the next generation of clinical and, potentially, school-based psychologists

By the year 2030, there could be a nearly 23% increase in the need for mental health care jobs nationwide. That includes therapists for K-12 schools in Georgia. 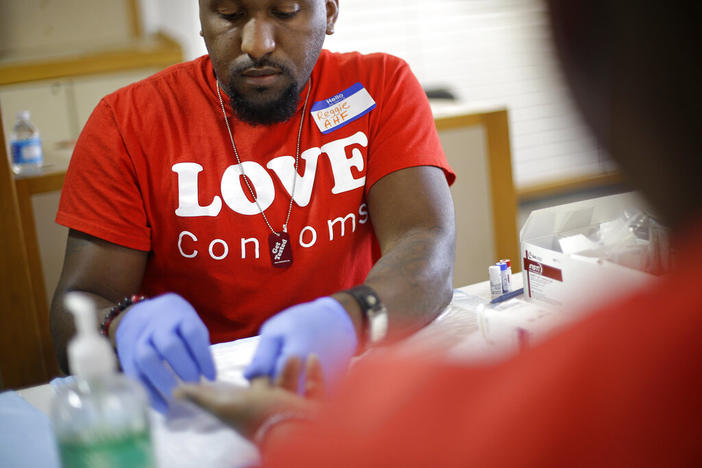 Georgia is far from meeting the kind of goals that have been established for the nation for 2030 in terms of reduction of new HIV infections and suppression of the virus for people living with HIV. 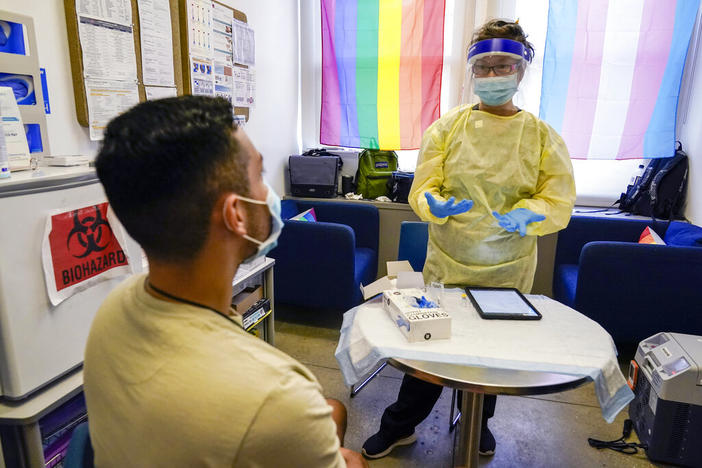