Cases of the omicron variant are surging in Georgia during this fifth wave of the COVID-19 pandemic, and that’s impacting people of all ages. GPB’s Ellen Eldridge reports. 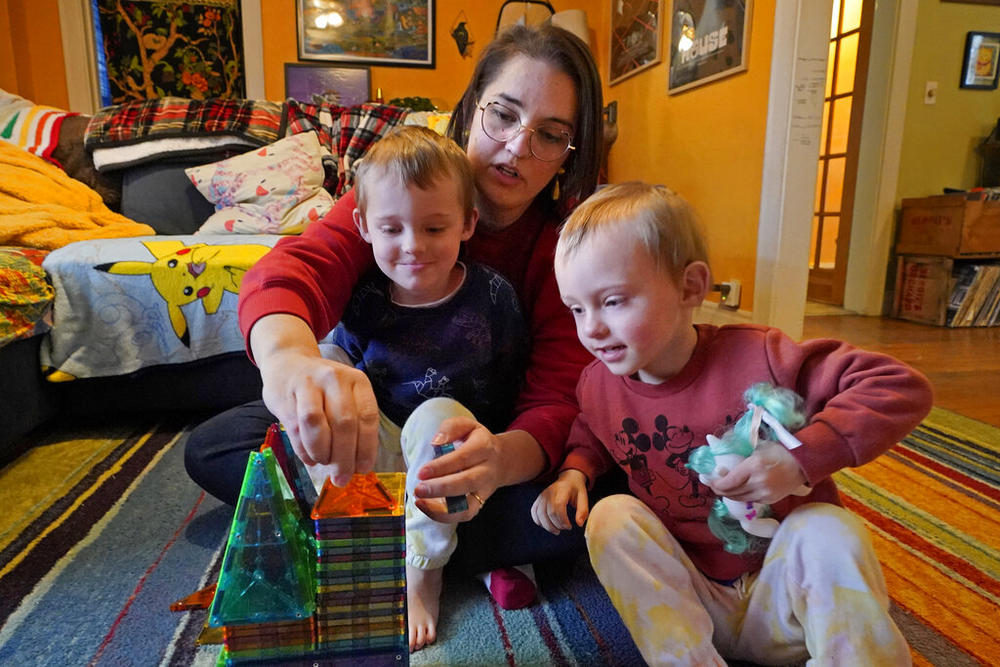 Heather Cimellaro, builds a toy house with her twins, Milo, left, and Charlie, at their home, Wednesday, Jan. 5, 2022, in Auburn, Maine. Heather Cimellaro is one many parents concerned about the omicron surge and the dilemma it's posing for families of children too young to be vaccinated.

Many parents hoped end-of-year holidays and vacation would lead to a better sense of peace, if not normalcy, with respect to the ongoing pandemic.

Instead, as we head into the third year of COVID-19, Georgia is seeing its highest case counts — particularly among children — since the virus appeared. Much of that comes thanks to the omicron variant.

This latest variant, which only made its debut in Georgia about a month ago, moves much more quickly than the delta variant. That’s the bad news.

The good news is that vaccines are doing their job, said Dr. Syra Madad, an infectious disease epidemiologist at Harvard’s Belfer Center for Science and International Affairs and the NYC hospital system.

In New York City, where COVID cases are currently leading the nation, many patients sick enough to need hospitalization are elderly or have other health issues that put them at higher risk for severe disease or death, Madad said.

“In addition to those being hospitalized, as you look at their vaccination status, by and large a majority of those that are hospitalized are unvaccinated,” she said. “And so, again, that really just shows you the power of vaccination in our communities.”

Infections in children spiked in the last 14 days of 2021, with Rockdale and Newton counties seeing the highest case counts in the metro Atlanta area, which leads the state.

More adults get sick when community spread is high, which inevitably leads to more sick children. This is also the time of year when students return to school after winter break.

Available data show that severe illness due to COVID-19 is uncommon among children, but more pediatric patients are being admitted to hospitals.

Hospitalized children with COVID are most often unvaccinated, Madad said.

Also, attention should be paid toward the longer-term impacts of the pandemic on children, including ways the virus may have negative emotional and mental health effects, according to the American Academy of Pediatrics.

Pfizer’s mRNA vaccine is now available for children as young as 5 years old, but instead of curbing community spread by vaccinating, Georgia, with its 55% vaccination rate, is experiencing a fifth wave of COVID cases.

Emory University School of Medicine Distinguished Professor Dr. Carlos del Rio told Political Rewind on Tuesday that everyone entering an emergency room is tested for COVID-19, and that this is a procedure doctors have been doing for months now.

Lately, roughly 30% of patients test positive for the disease despite seeking care for unrelated medical issues, such as treating injuries after a car crash.

That estimate predates data available Monday from the Georgia Department of Public Health. The state said an overwhelming amount of data could not be sorted quickly enough to meet the usual deadline for the weekly report.

Holiday travel and indoor gatherings will likely lead to even more testing as well as higher percent positivity, Del Rio said, adding that everyone should remain “on guard.”

That means a return to masking in public — and wearing a proper mask correctly, with a strong seal, he said, suggesting KN95 or N95 brands. Del Rio admitted many masks for sale are not NIOSH approved, and consumers must be wary.

As of Thursday, Jan. 6, the rate of positivity in Georgia has risen to 25%. The goal experts aim for is less than 5% positivity.

Back in August, when students returned to in-person classes, the delta variant pushed test positivity to 29%. At that time, Georgia had not seen more than 40,000 new COVID cases in a week since January, reported microbiologist Amber Schmidtke.

Del Rio said the best way to protect children under 5, who currently cannot get vaccinated, is to vaccinate those around them.

MORE: They were pregnant when the pandemic hit. Now these moms are eager to vaccinate their new kids

“As a grandparent of two kids under 5, it’s something we’re all concerned about,” Del Rio said. “At this time, what we need to tell parents of kids under 5 is that the best way to protect the kids is to have everybody around them vaccinated.”

Many Georgians now feel like every step forward gets pushed two steps back by new variants. Many people are burned out on all aspects of the pandemic. Many gave up wearing or never wanted to wear masks, and, now, many people are shutting out any information about coronavirus.

The experts haven’t changed their advice: All people age 5 and above should get at least one dose of an mRNA or the Johnson & Johnson vaccine as soon as possible.

The Centers for Disease Control and Prevention predicts the surge of cases from the omicron variant will peak later this month. 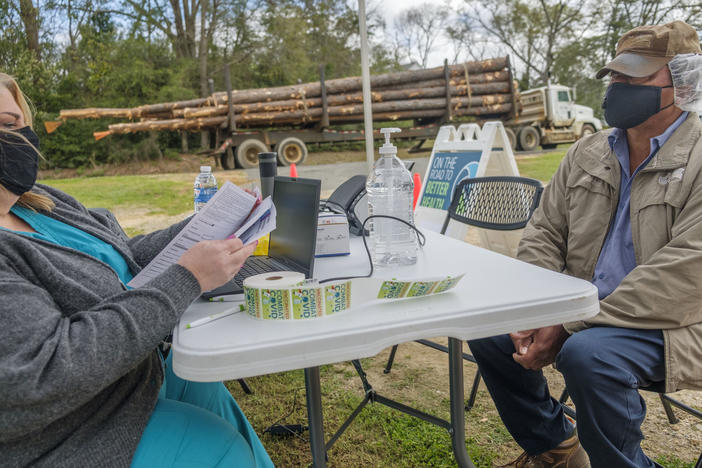 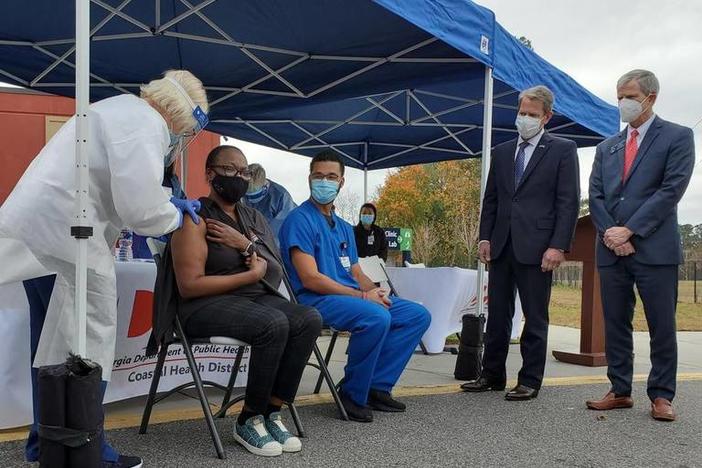 The first COVID-19 shots arrived a year ago. Just 50% of Georgians are fully vaccinated

Public health and government officials sighed with relief when COVID-19 vaccinations came to Coastal Georgia last December. The first 84,000 doses were set aside for those working in health care, including Dr. Kathleen Toomey, the commissioner for the Georgia Department of Public Health.

She spoke after receiving her first shot, saying vaccination felt like the "light at the end of a tunnel" after a long, hard year.