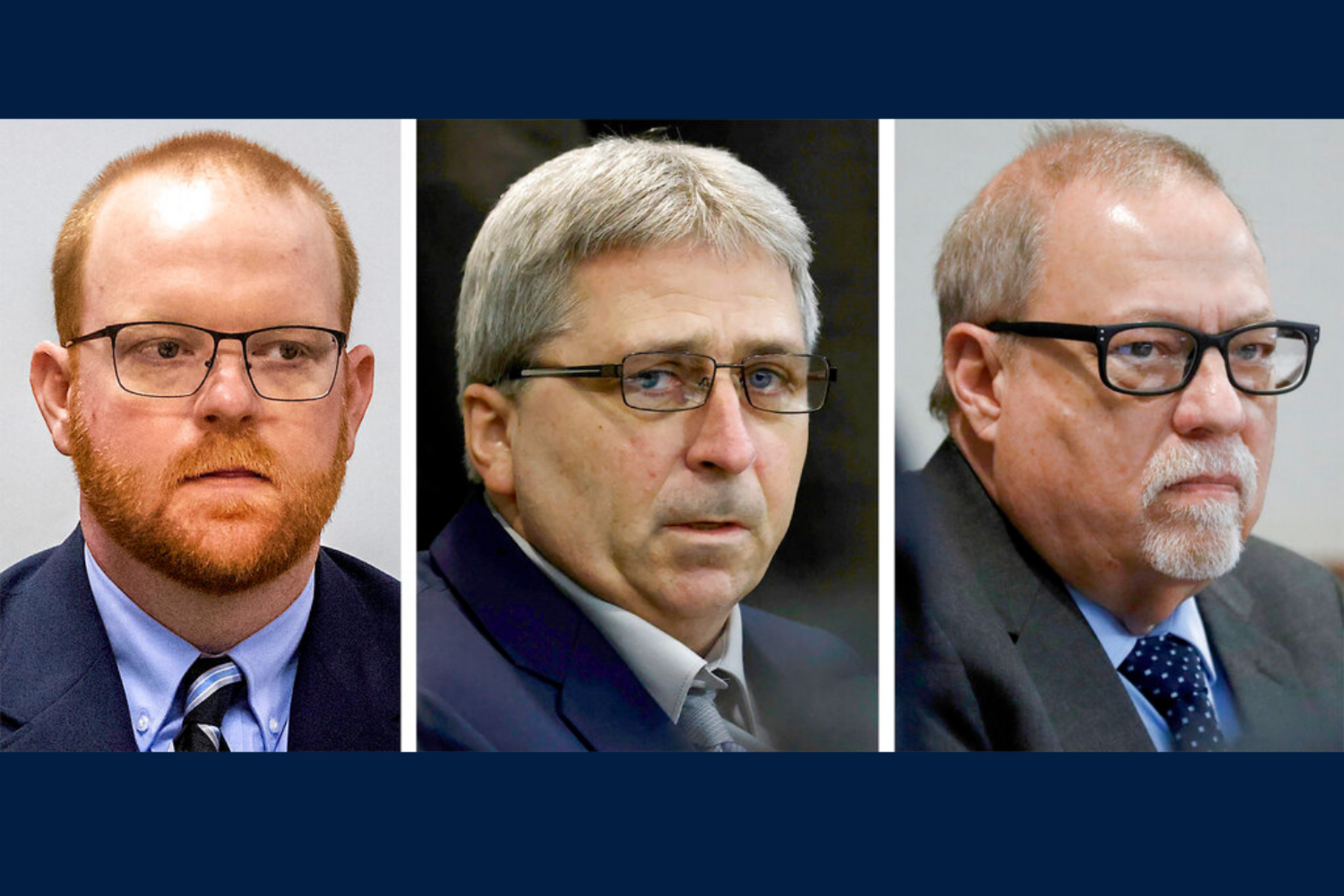 Caption
This photo combo shows, from left, Travis McMichael, William "Roddie" Bryan, and Gregory McMichael during their trial at at the Glynn County Courthouse in Brunswick, Ga. Jurors on Wednesday, Nov. 24, 2021 convicted the three white men charged in the death of Ahmaud Arbery, the Black man who was chased and fatally shot while running through their neighborhood in an attack that became part of the larger national reckoning on racial injustice.
Credit: Pool, file via AP

All three defendants were found guilty of murder in the February 2020 killing of Ahmaud Arbery.

The nearly all-white jury in Glynn County reached its decision on Wednesday on Day 2 of deliberations in a racially charged case that has become one of the most-watched trials in the nation amid a reckoning over racial justice.

Gregory McMichael, 65, his son Travis McMichael, 35, and William Bryan, 52, were charged with murder, false imprisonment, and aggravated assault for chasing Arbery, a 25-year-old Black man, in pickup trucks as he jogged in a Coastal Georgia neighborhood and shooting him to death. Bryan filmed the killing on his cellphone. 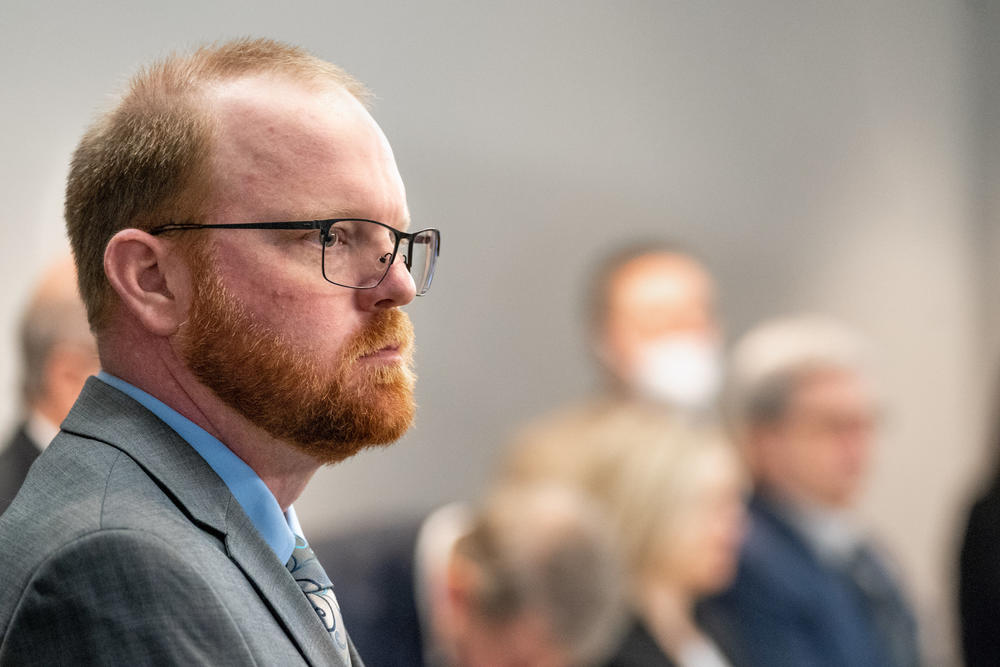 Defendant Travis McMichael stands as the jury enters the room at the Glynn County Courthouse on November 8, 2021 in Brunswick, Georgia.

They face the possibility of life in prison without parole. The three also separately face an array of federal hate crimes charges.

Arbery’s mother, Wanda Cooper-Jones, looked up, appearing to mouth a silent prayer as the judge began to read out the verdict. As the judge announced the first guilty verdict, Arbery’s mother sobbed aloud: “Oh!”

Her head sank to her chest as she wept, with the Rev. Al Sharpton holding her hand.

Arbery's father, Marcus Arbery, leapt up at the first guilty verdict, cheering the verdict and throwing his arms up in celebration. Superior Court Judge Timothy R. Walmsley scolded him and asked for people in his courtroom not to react any further. The judge asked Arbery’s father to leave.

Sheriff’s deputies came over and escorted him out.

“It’s been a long time coming,” he said, and left.

The defendants sat quietly, looking stunned in the courtroom.

“I’m floored, floored with a capital ‘F,’” Laura Hogue, one of Gregory McMichael’s lawyers, told Leigh McMichael as she sat in the courtroom gallery, the room emptying out around her, her face was red with tears.

Outside the courtroom, protesters erupted in cheers and chanted Arbery's name.

Speaking to reporters and the crowd outside, Sharpton said, "Let the word go forth all over the world that a jury of 11 whites and one Black in the Deep South stood up in a courtroom and said that black lives do matter."

“Let’s be clear: That almost 10 years after Trayvon, God used Wanda and Marcus’s son to prove that if we kept marching and kept fighting, we would make new heroes,” Sharpton said, referring to the 2012 killing of unarmed 17-year-old Trayvon Martin in Florida. “We’ve got a lot more battles to fight, but this was an important battle today. This was proven that our children know their value.”

Arbery's mother told the crowd, "It's been a long fight. It's been a hard fight. But God is good."

"I never thought this day would come," Cooper-Jones said, thanking marchers and other supporters who rallied to her cause. She said her son could "now rest in peace."

The three defendants claimed they had acted in self-defense and said they believed Arbery was connected to a string of burglaries in a suburban Brunswick neighborhood. No evidence was ever presented tying Arbery to any crimes; he was jogging through the neighborhood when he was gunned down in broad daylight.

Lead prosecutor Linda Dunikoski blasted the men’s claims of self-defense, telling jurors that the three men were the ones who started the confrontation, chasing Arbery for nearly five minutes.

"You can't claim self-defense if you are the unjustified, initial aggressor," Dunikoski said. "This isn't the Wild West." 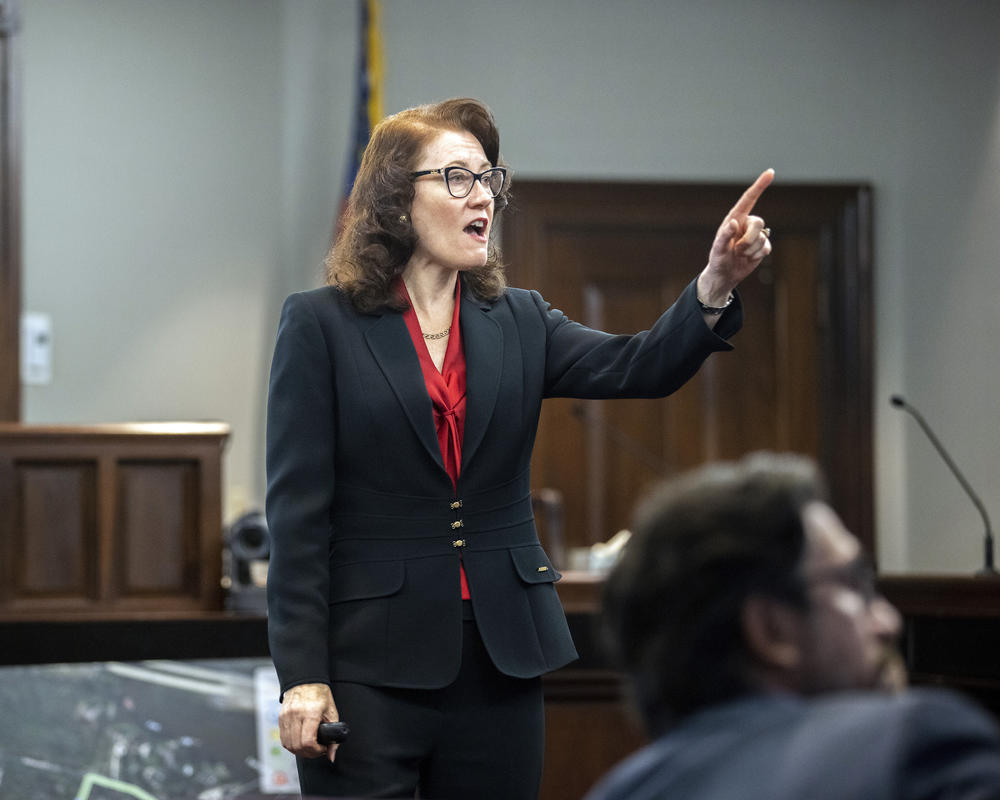 Prosecutor Linda Dunikoski presents a closing argument to the jury during the trial of Travis McMichael, his father, Gregory McMichael, and William "Roddie" Bryan, at the Glynn County Courthouse, Monday, Nov. 22, 2021, in Brunswick, Ga.

The jury was comprised of 11 white people and one Black person, despite Glynn County having a nearly 27% Black population.

Arbery was killed in February 2020, but the defendants were not charged for months — and only after the video of the killing surfaced. Widespread protests calling for social justice swept the nation — and only grew after the police killing of George Floyd in Minnesota.

RELATED: The killing of Ahmaud Arbery: A timeline of events

Travis McMichael fired the fatal shot with a shotgun.

During the trial, he took the stand in his own defense, telling the court: "It was obvious that he was attacking me, that if he would've got the shotgun from me, then it was a life-or-death situation. And I'm gonna have to stop him from doing this, so I shot." 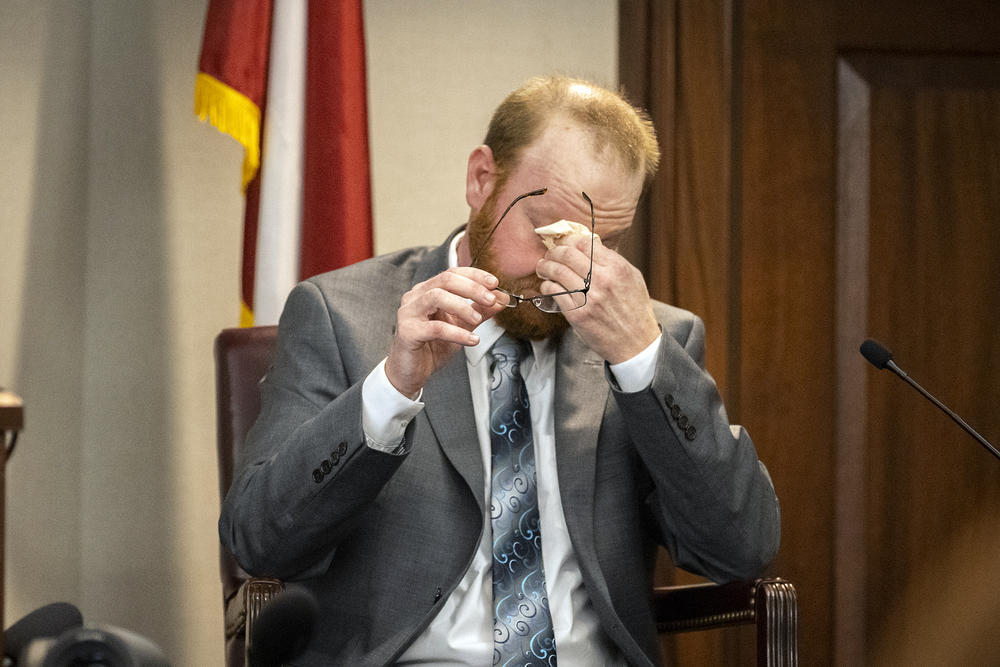 Travis McMichael reacts to questions during his testimony in the trial of he and his father Greg McMichael and neighbor William "Roddie" Bryan in the Glynn County Courthouse, Wednesday, Nov. 17, 2021, in Brunswick, Ga.

Dunikoski questioned the men’s motives and self-defense claims, saying it was Arbery who was under attack, not them.

“All three of these defendants did everything they did based on assumptions,” Dunikoski said. “And they made decisions in their driveways based on those assumptions that took a young man’s life.”

"Not once during your statement to the police did you say that you and your father were trying to arrest Mr. Arbery, did you?" Dunikowski asked.

RELATED: Ahmaud Arbery's death fueled calls for change. Here are the top five things it did

The prosecutor asked McMichael about his views of vigilantism and highlighted several comments he made to his Satilla Shores neighbors on Facebook, including one in July 2019 when he told people to arm themselves to confront criminals.

In January 2019, Dunikoski said, McMichael praised a woman who called for making example of people who steal.

"That's right," McMichael said, confirming to the prosecutor those were his words.

The prosecutor also pointed out McMichael had at least three opportunities to stop chasing Arbery and to let the police handle the situation, but he did nothing to alert authorities.

At one point, the prosecutor noted Arbery was running away from the three men.

"Why in the world would Mr. Arbery be a threat to you?" Dunikoski said.

The attorneys for the defendants repeatedly asked for a mistrial but Superior Court Judge Timothy R. Walmsley denied the requests.

At one point, an attorney for Bryan asked for “high-profile African Americans” to be denied entry into the courtroom after prominent Black pastors showed up in support of Arbery’s parents.

That request was also denied, and led to a large protest outside the courthouse with Black pastors and others rallying to support the family. 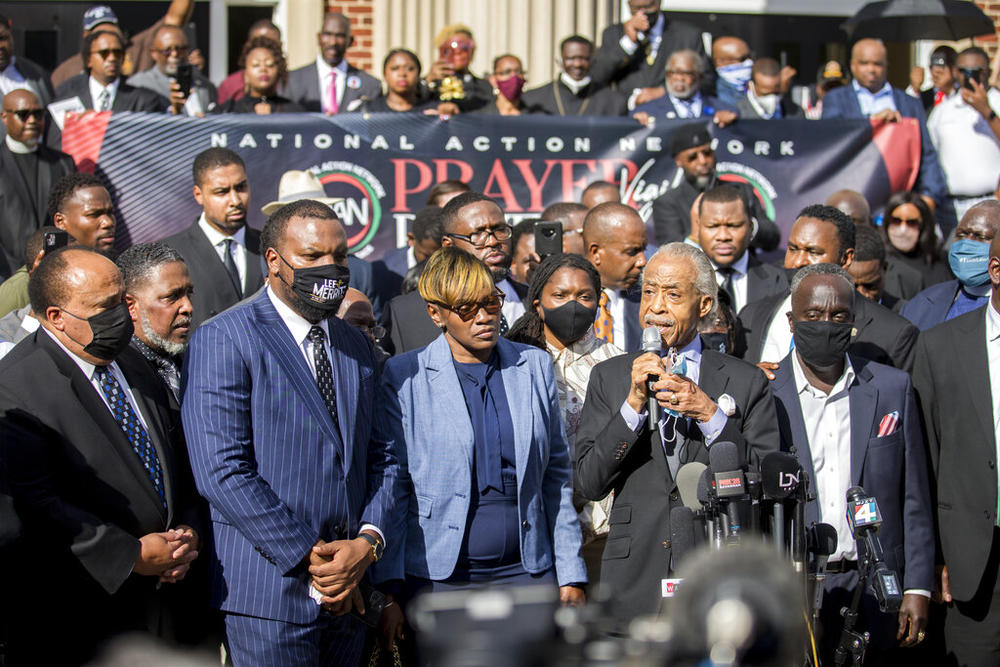 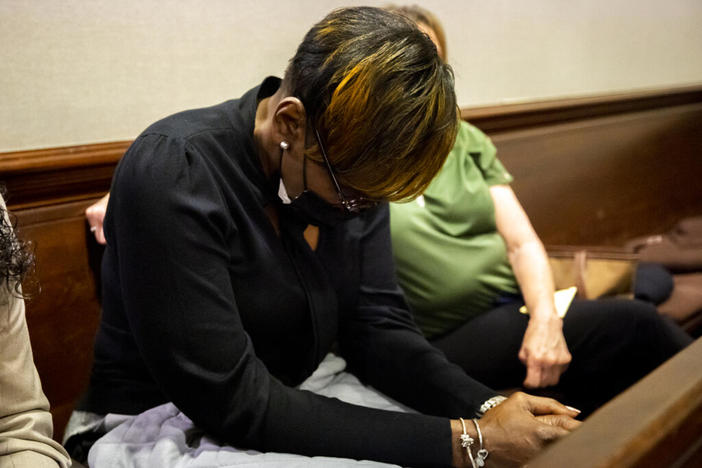