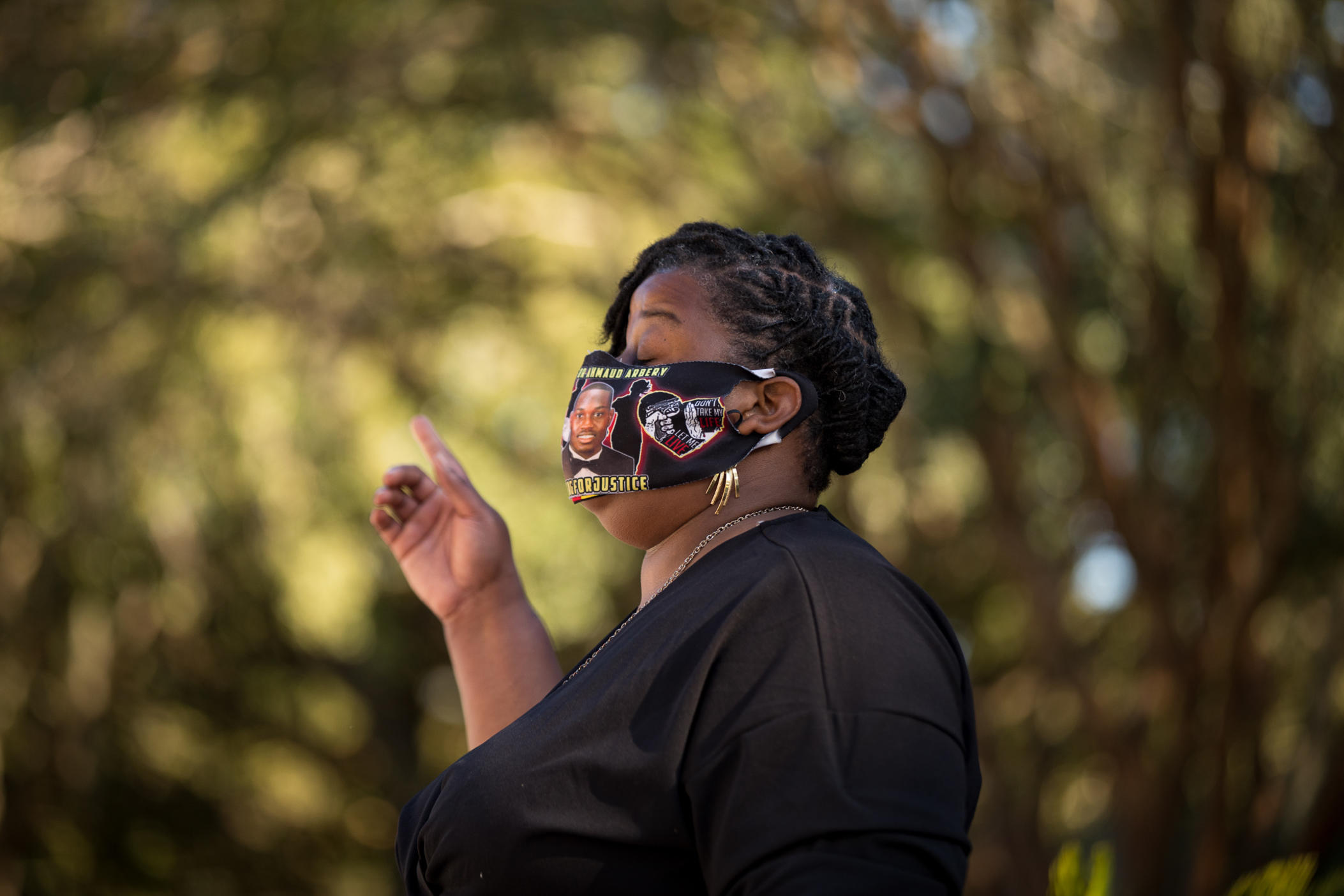 Caption
Ahmaud Arbery’s aunt Theawanza Brooks prays outside of the Glynn County Courthouse in Brunswick on Oct. 17, 2021, during a vigil to honor Arbery ahead of the trial of the three white men charged in his killing.
Credit: Riley Bunch / GPB News

With the nation’s attention focused on the trial that is expected to disrupt the otherwise routine day-to-day of life in Brunswick, a cavalcade of cars made its way through the coastal Georgia town.

The mile-long procession began at the Glynn County Courthouse and retraced the path Ahmaud Arbery once ran — a quiet road that loops through a seaside subdivision and under the once innocuous but now looming Satilla Drive street sign.

The group of family and friends inched down the road where Arbery took his last breath on Feb. 23, 2020. They passed the very spot Arbery was gunned down in broad daylight, a haunting killing captured on cellphone video that shocked the country and led to nationwide protests.

Read all the latest news on the Arbery trial here.

Theawanza Brooks, one of Arbery’s aunts, said the short drive to that stretch of pavement in the Satilla Shores neighborhood reopened wounds from when she learned of her nephew’s death.

“Today, I find myself fighting back tears that I haven't shed in a long time,” she said.

It was a solemn journey, but one part of a rally honoring Arbery on Saturday, just two days before the start of jury selection when all eyes will turn to this corner of Southeast Georgia. 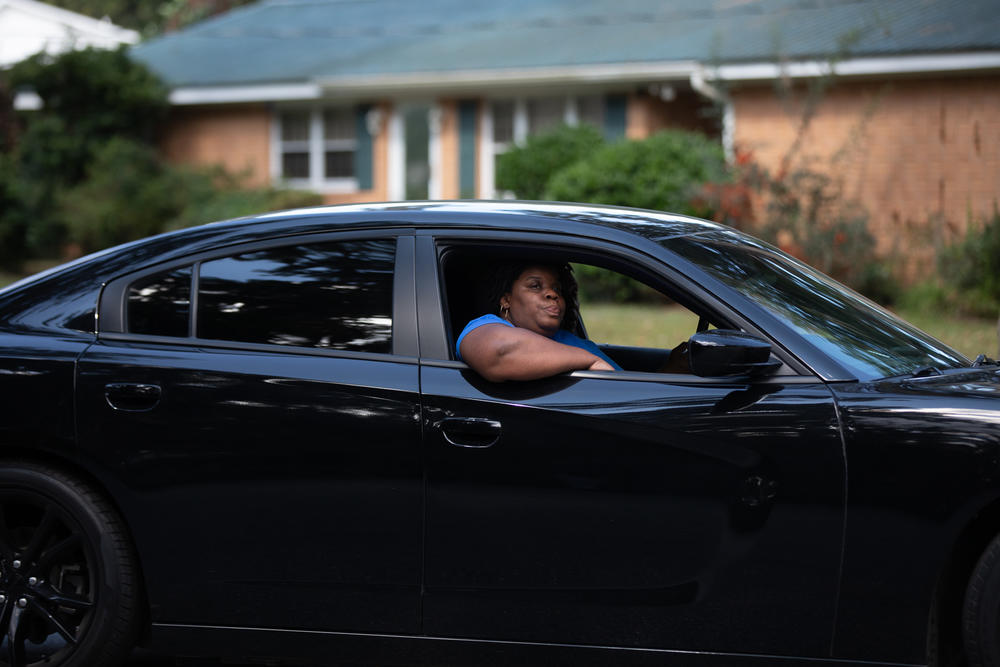 Ahmaud Arbery’s aunt Theawanza Brooks, rides in a car down Satilla Drive, the street where her nephew took his last breath, during a car procession in Brunswick on Oct. 16, 2021.

Travis McMichael, 35, his father Gregory McMichael, 65, and William Bryan, 52, the man who filmed the killing on his cellphone, face an array of state charges, including murder, aggravated assault for chasing Arbery in their pickups and false imprisonment. They have separately been charged with federal hate crimes.

Although Arbery was killed in February 2020, it took more than two months for any arrests to be made and only after the video went public.

The video showed Arbery running in the shade of Spanish moss hanging from sweeping oak trees before his path was blocked by a white pickup truck. The McMichaels, both armed, pursued Arbery. A muffled struggle can be heard between Travis and Arbery offscreen before three shotgun blasts.

Arbery, back in view of the camera, staggered and fell to the ground. He died at the age of 25.

Arbery’s death sparked uproar not only in the Peach State but far outside of its borders, with demands for justice and social change.

Brooks recounted the day in May the cellphone video of the killing surfaced on Facebook, when a crowd flooded the sleepy subdivision in protest.

“It was hundreds and hundreds of people there, just from logging on to Facebook and seeing the video that came to stand with us,” she said.

She implored supporters to stick with the family until the jury releases the verdict, whenever that may be.

“Some of those hundreds of people and maybe all of you have been running with us since the day the video came out," Brooks said. "And I want to tell you that without you guys, none of this would be possible." 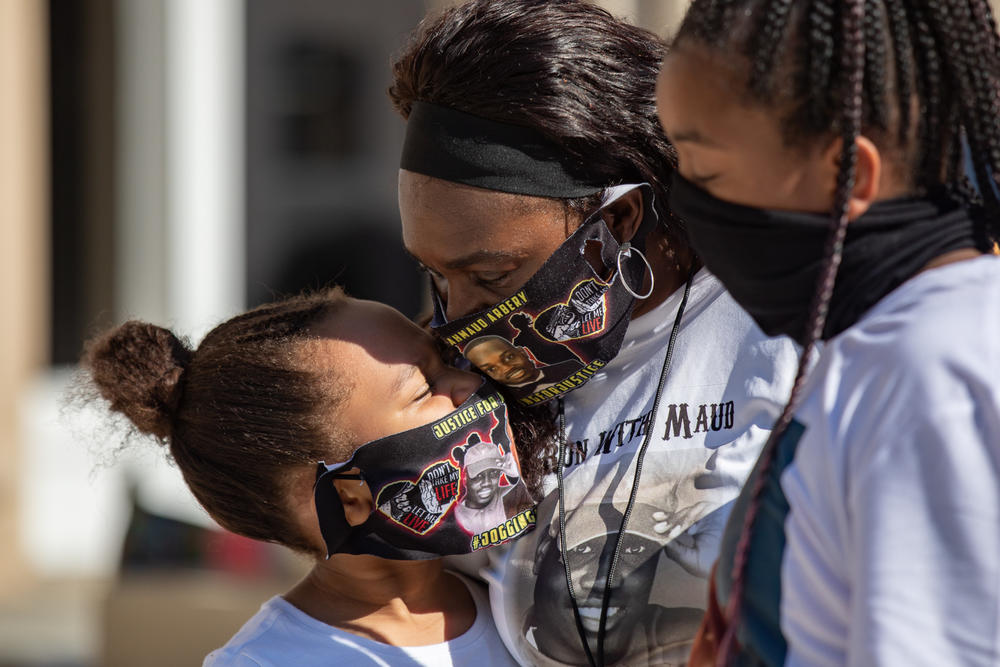 While the coastal town of Brunswick is still waiting for ultimate closure in Ahmaud Arbery's death — which family and friends say would come with three guilty verdicts — the tragic incident sparked undeniable change not only for the small town but the entire state of Georgia.

In Brunswick, the investigation forced former district attorney Jackie Johnson to recuse herself from the case due to potential conflicts of interest. She now faces charges of attempting to protect the McMichaels from prosecution. Following the killing, Glynn County now has its first Black chief of police.

The Georgia General Assembly responded to Arbery’s death with historic action: In June of last year, lawmakers passed hate crimes legislation after more than a decade without one on the books.

This May, Republican Gov. Brian Kemp signed an overhaul of the state’s citizen’s arrest statute. Lawyers for the defendants in the trial attempted to use the vague, Civil War-era law to justify their actions.

With the trial set to get underway, local leaders have urged the community to not let the momentum fade away.

“If you have to march, march," Brunswick Mayor Cornell Harvey said Saturday. "If you have to crawl, crawl. Shout, shout. Whisper. Please do all those things. Let America know what has happened here and the changes that must go on across our nation.”

“You tell the world: What has happened here should never, ever happen anywhere again,” he added. 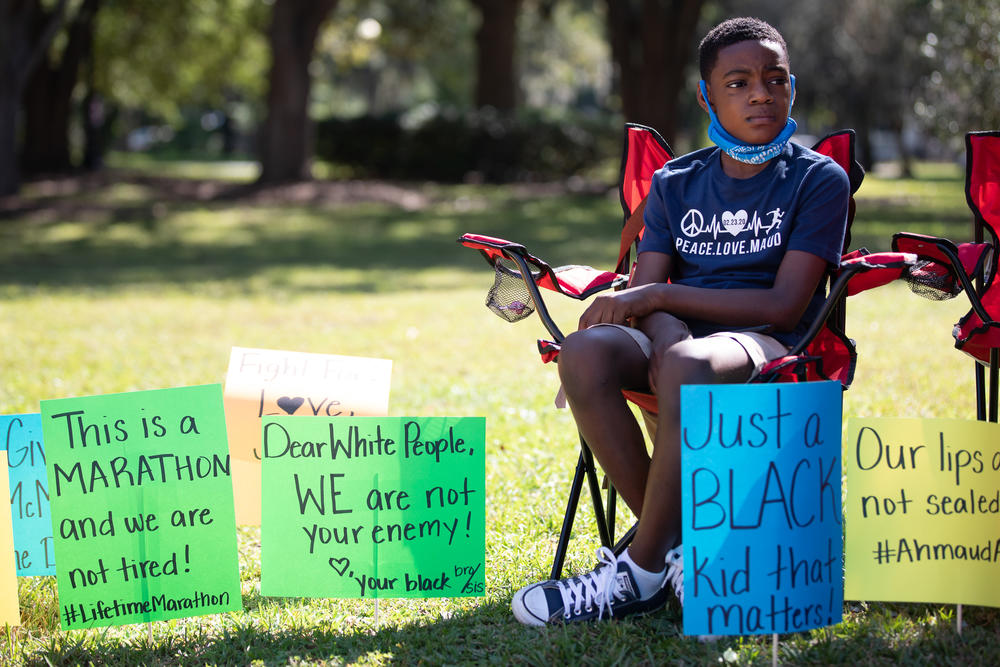 Under the microscope of the nation, the Glynn County community will shoulder the weight of the high-profile jury trial. Court observers have said jury selection could take at least two weeks.

Up to 1,000 potential jurors — or about 1 in 85 residents — have been summoned and will report to Selden Park, about two miles from the courthouse.

But in the end, only 12 will sit in the courtroom and render a verdict.

Carla Arbery, another aunt of Ahmaud’s, is anxious but hopeful justice will be rendered.

But selecting unbiased jurors will be one of the toughest challenges for a case that has garnered headlines both here and around the world.

The family believes whoever gets seated will come to the conclusion that Arbery was just a young man on a daily jog who was unjustly gunned down in his hometown.

Such a verdict, Brooks said, would “continue to make change so it is safe for everybody to walk the streets, to run the streets.“ 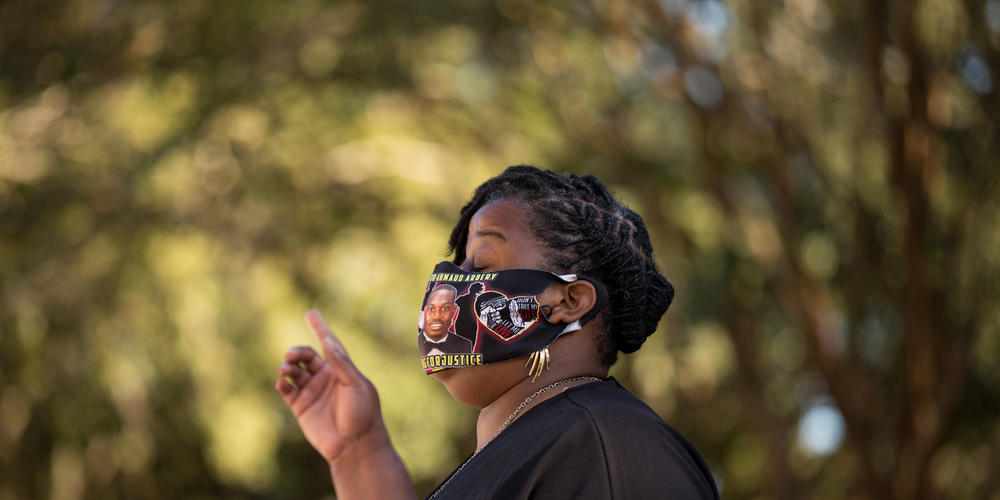 Ahmaud Arbery’s aunt Theawanza Brooks prays outside of the Glynn County Courthouse in Brunswick on Oct. 17 during a vigil to honor Arbery ahead of the trial of the three white men charged in his killing. 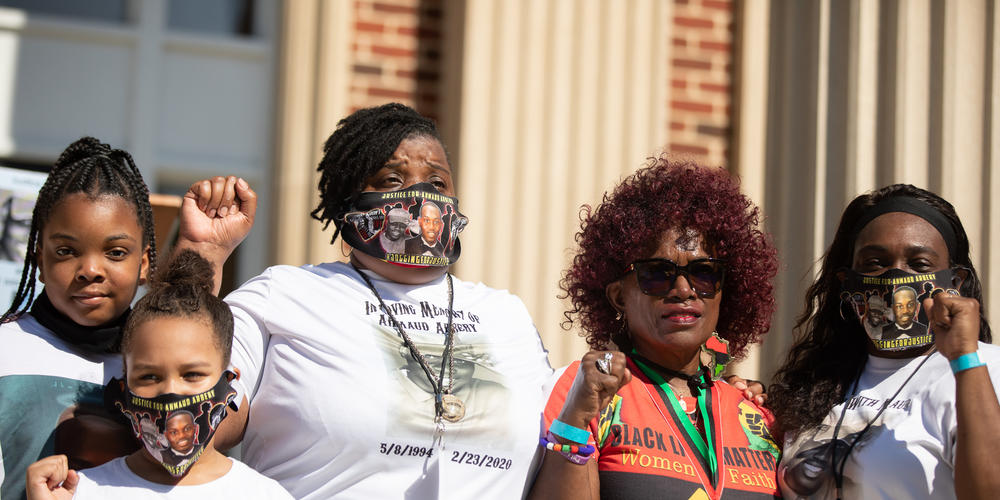 Members of Ahmaud Arbery’s family, including aunts Theawanza Brooks and Carla Arbery, rally outside of the Glynn County Courthouse on Oct. 16 as the trial for the three men accused in Arbery’s murder is scheduled to begin Oct. 18 in Brunswick. 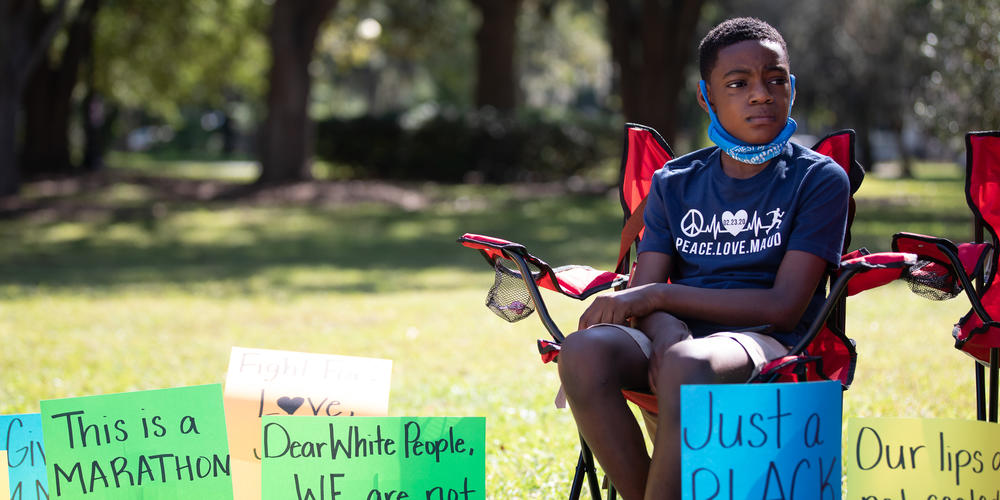 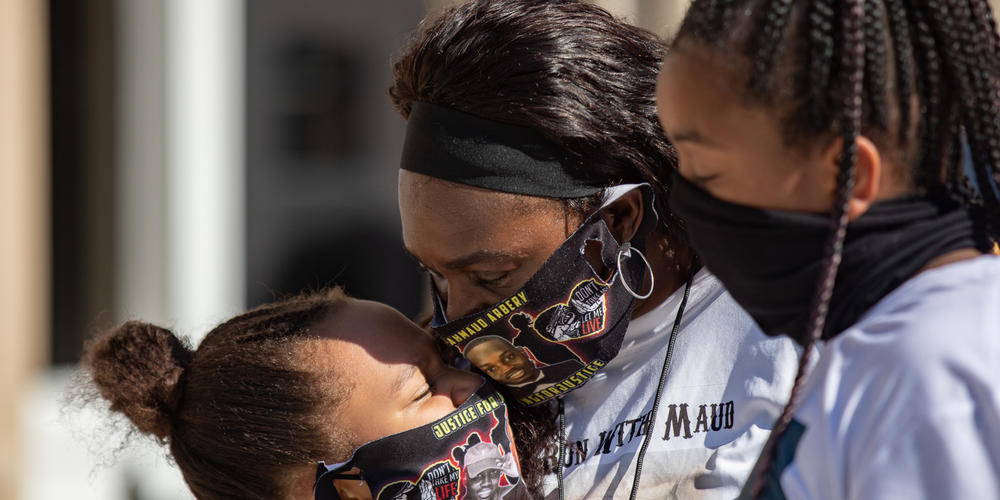 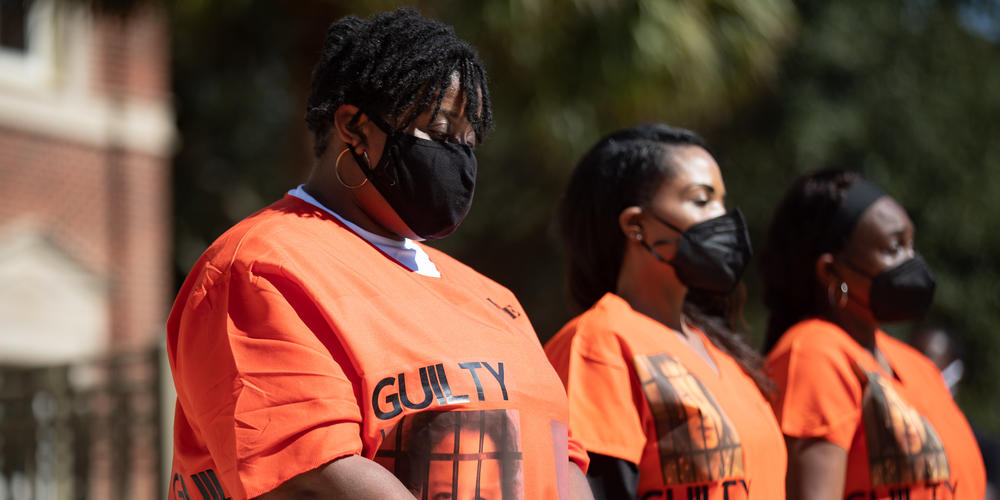 Outside of the Glynn County Courthouse, Ahmaud Arbery's aunt Thea Brooks joins a group during a weekend demonstration calling for the conviction of the three men who face charges in the death of Ahmaud Arbery and other county officials they say were complicit in his death. 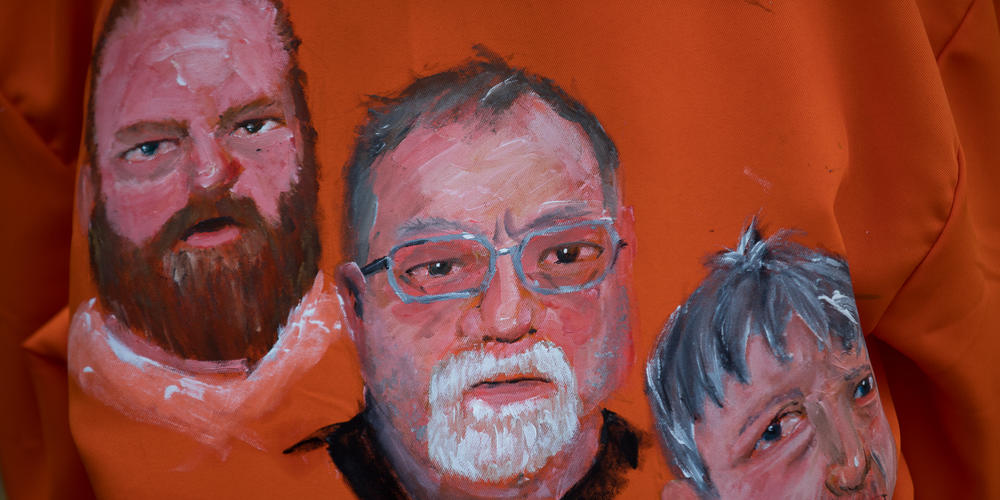 The faces of Travis McMichael, 35, his father Gregory McMichael, 65, and William Bryan, 52, who all face charges in the killing of Ahmaud Arbery are painted onto the back of an orange prison jumpsuit during a demonstration outside of the Glynn County Courthouse on Oct. 16. 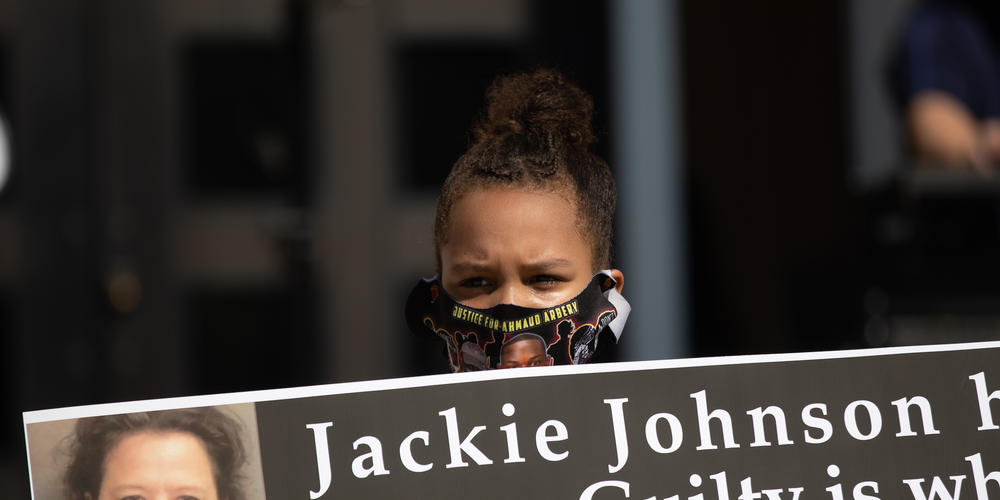 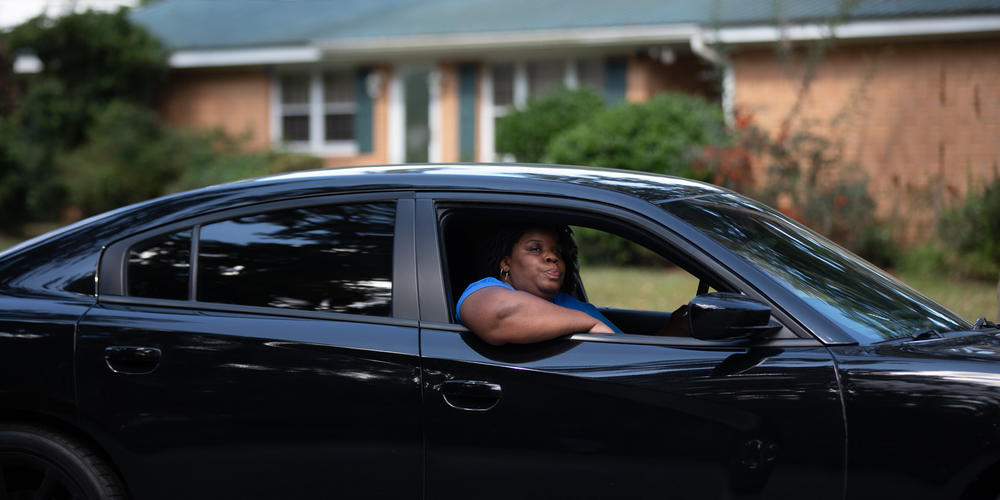 Ahmaud Arbery’s aunt Theawanza Brooks rides in a car down Satilla Drive, the street where her nephew took his last breath, during a car procession in Brunswick on Oct. 16. 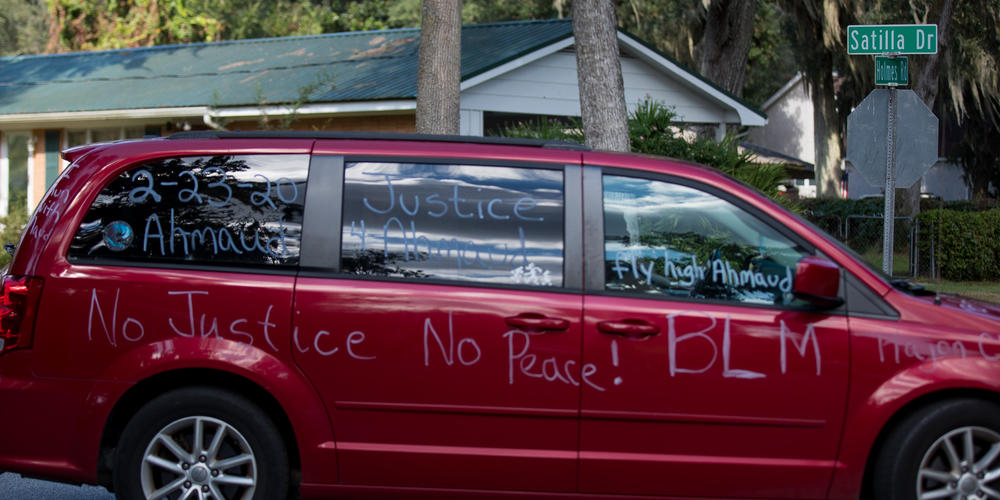 A car procession makes its way through the Satilla Shores neighborhood in Brunswick in honor of Ahmaud Arbery, who was killed in the location in February of 2020. 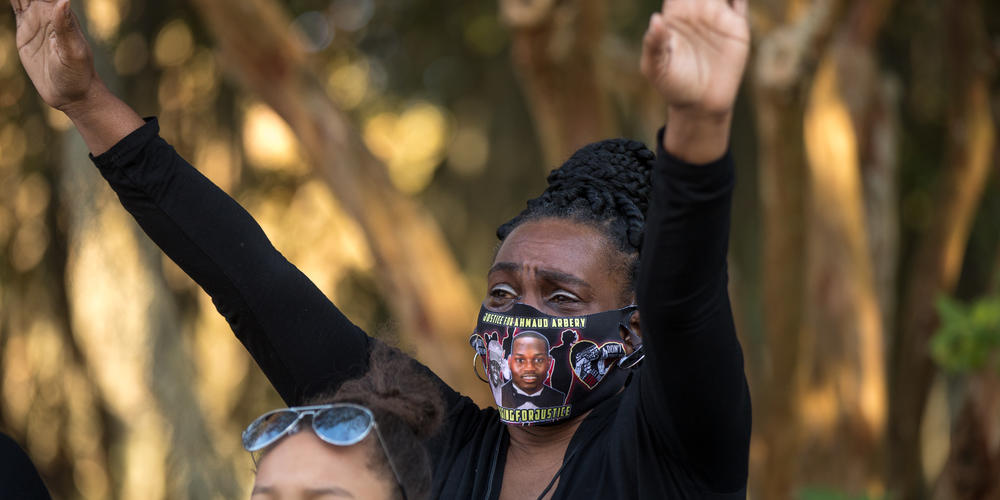 Ahmaud Arbery’s aunt Carla Arbery prays during a vigil outside of the Glynn County Courthouse in Brunswick on Oct. 17, 2021. 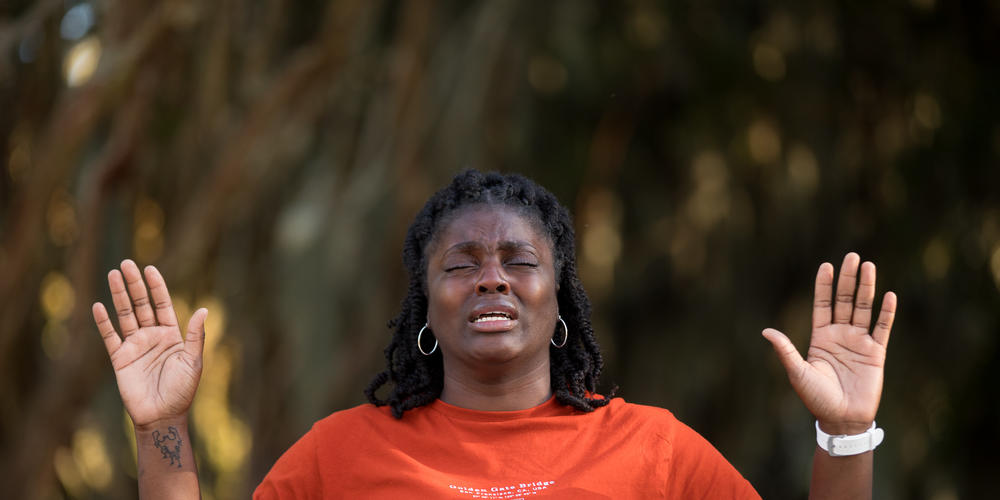 Lashay Thorpe prays during a vigil in honor of Ahmaud Arbery outside of the Glynn County Courthouse in Brunswick on Oct. 17, 2021. 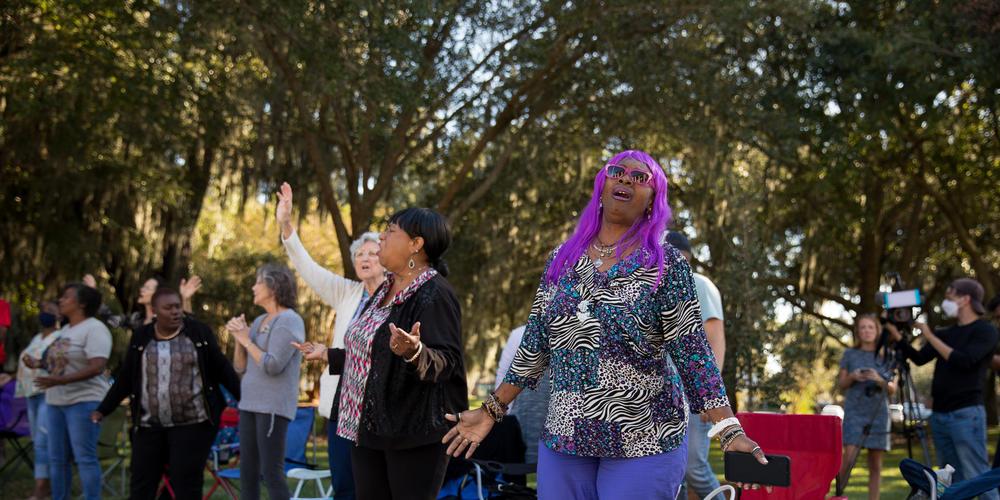 Friends and family of Ahmaud Arbery pray during a vigil outside of the Glynn County Courthouse in Brunswick on Oct. 17, 2021. 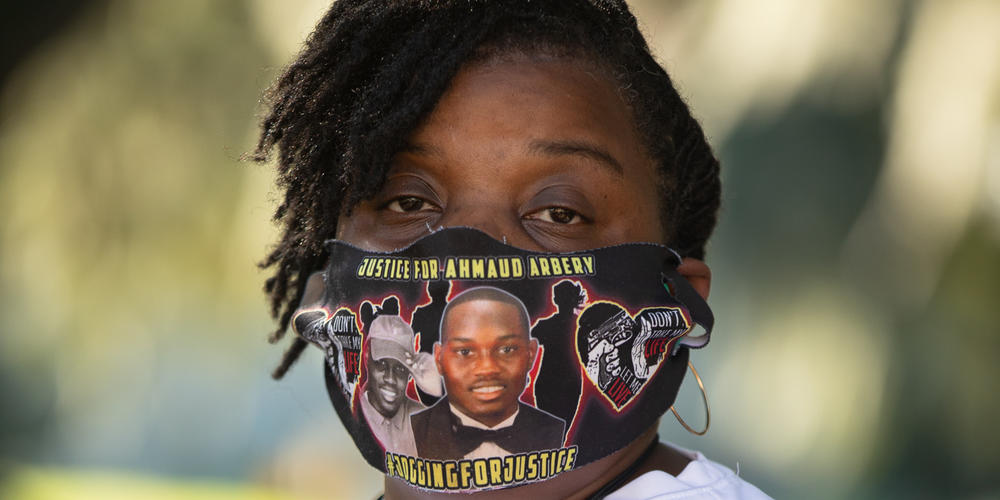 Ahmuad Arbery’s aunt Theawanza Brooks stands for a portrait outside of the Glynn County Courthouse on Oct. 16, 2021. 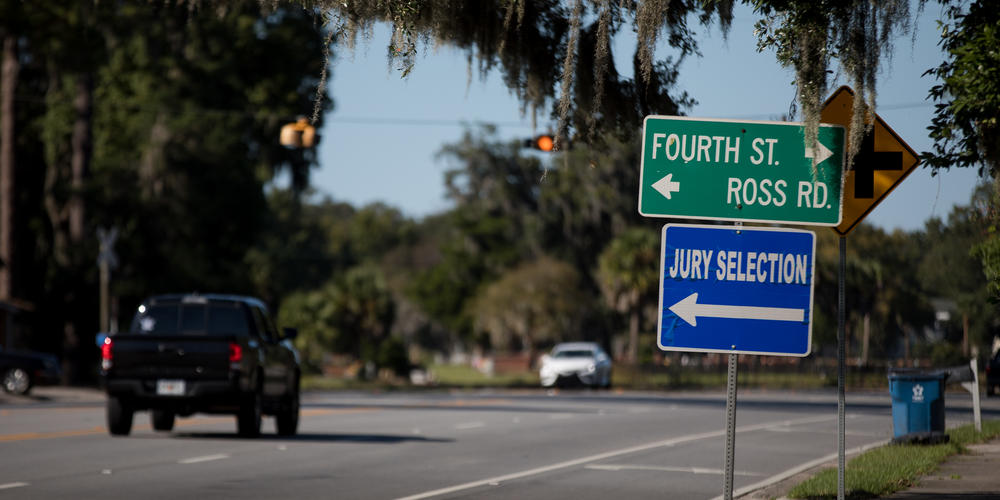 A sign directs Glynn County’s 1,000 potential jurors to Selden Park, a mass jury selection spot, as the trial gets underway on Oct. 18. 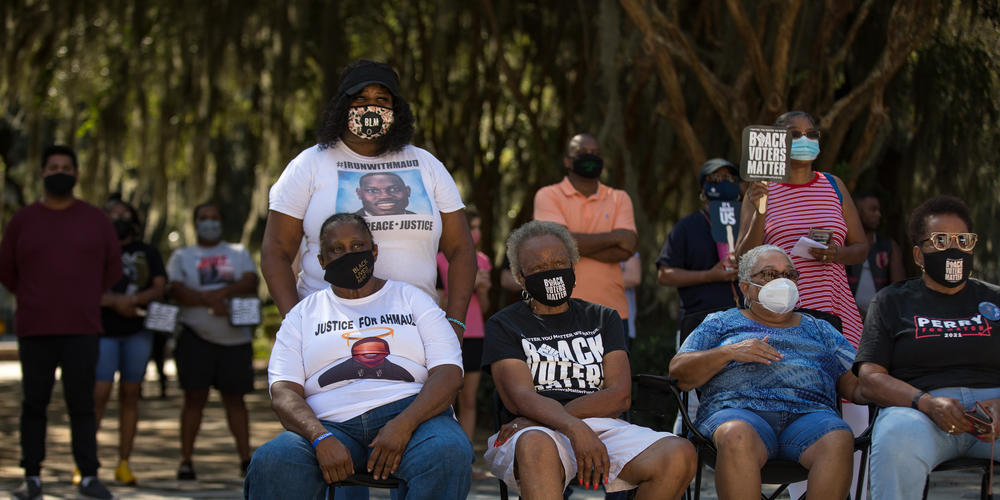 Supporters of Ahmaud Arbery gather at Glynn County Courthouse on Oct. 16, 2021, ahead of the trial of three men accused in his killing. 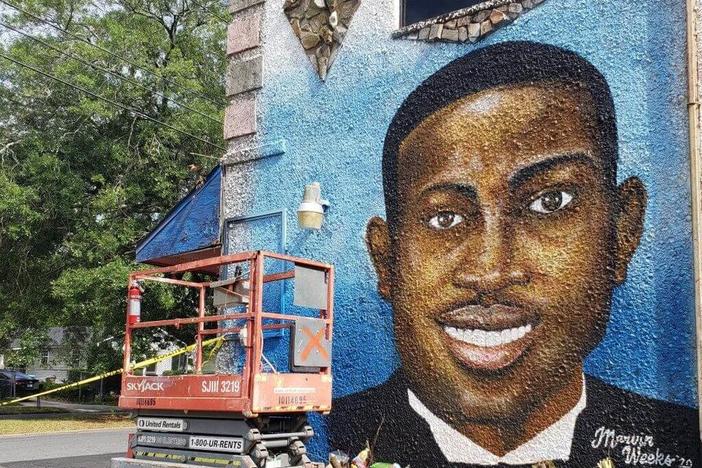 Georgia prosecutors say the 2020 killing of Ahmaud Arbery was followed by 16 phone calls between the local district attorney and a former employee later convicted of murder in the shooting. Former Brunswick Judicial Circuit District Attorney Jackie Johnson was indicted last year on misconduct charges for her handling of Arbery's death.